Digging In The Dirt -- Part Four: It Takes A Community To Find Your Ancestors 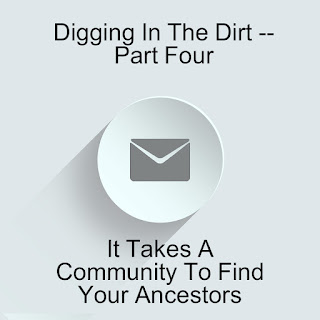 The folks in the genealogy community are some of the kindest most curious people you'll ever meet. They are problem solvers. They think outside of the box and they like to share what they know. People who carry these traits want you to be able to find your people. They find joy in it.

I would like to thank two members of genealogy community who helped me recently. As a result, I think I found my 3rd great grandfather Cesar Jones listed in a probate record for a William Jones (born about 1764 -- died July 9, 1838) of Onslow County NC. This William Jones just so happened to be the father of Allen B Jones who I wrote about in my post, Digging in The Dirt --Part Three: Did Allen B. Jones Own My 3rd Great Grandfather, Cesar Jones?

You remember what I said about genealogy people being naturally curious. First, David checked the will of William Jones and didn't see any names of slaves listed. He checked to see if there was a Cesar listed among the pages of probate records for several members of the Jones family and sent me a detailed email with links to those pages. David wasn't able to find Cesar but his email inspired me to go and look page by page through William Jones's probate record.

I have to admit that years ago, I actually did a cursory search through William Jones's probate record looking for clues regarding my Jones family line. I didn't come across anything. That's because I didn't go page by page. What can I say? I was a newbie. I did a quick scan because I was in too much of a hurry looking for the next bright shiny new nugget of genealogy info.

That email from David French was just the nudge I needed to go back and do things the right way. Guess who I found? 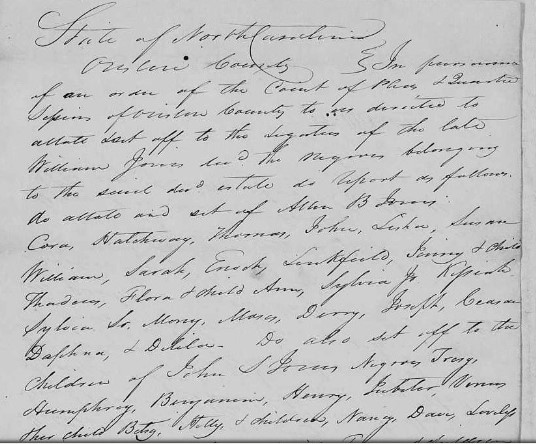 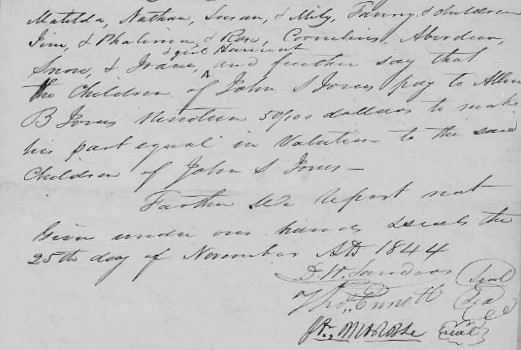 Did you catch it? Here's a close up if you missed it.

William Jones left his son Allen B Jones a group of slaves, one of whom was named Ceasar. I think this just may be my 3rd great grandfather.