November 16, 2011
I am taking a break from my Whitney family line today. I believe I had mentioned somewhere in my earlier posts about  Rosa M. Jones, my second great grandmother, being of some portion Native American. Her maiden name was Mitchell and I have come across some circumstantial evidence that gives me the impression that the family was of Tuscaroran descent.

On a site called "The Coastal Carolina Indian Center", I found a section which shows a listing of surnames that have been associated sometimes with certain Indian tribes.

Now the site does warn people,"Please keep in mind that just because someone is of a particular surname that has at some point been associated with a particular tribe DOES NOT NECESSARILY mean that the person was of that tribe. It is necessary to establish a preponderance of evidence before making the assumption that someone was of a particular Indian nation."

Now Rosa Mitchell Jones did not live in Bertie County, but rather she grew up in the Riverdale area of Craven County and later married and resided in Morehead City. Craven County was at one time definitely a hot bed for Tuscaroran activity so location seems right.  I do know that her brother Alfred Mitchell worked in Bertie County, specifically in an area called Roxobel according to the 1880 Census.

Here are some images from Wikipedia of Tuscaroran Indians: Here is an image of Rosa Mitchell Jones. 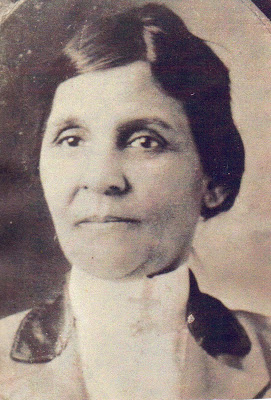 Hmmm. What do you think?

If you want a good summation of what happened to the Tuscaroran People in North Carolina before the Tuscarora War and afterwards, Wikipedia is great source to turn to. In summary, the Tuscaroran people after the war were displaced to a reservation called "Indian Woods" in Bertie County; those who did not move to the reservation moved north. Most moved to join the Iroquois Five Nations of New York, becoming the Sixth Nation . It turns out the Tuscarora are descended from the Iroquoian tribes of this area. Now when I researched this information out about a year and 1/2 ago, I had one of those goose bumps moments when you find something out that is really enlightening. Well there's a Professor Arwin D. Smallwood, who is the author of a book I own called "Bertie County:  An Eastern Carolina History." In this book, he provided some information I found to be very intriguing. He goes on to talk about how many of the survivors of the war would blame those with the "Tuscarora Eye" for their misfortune. Specifically here is part of the testimony of a Dr. Hamilton of East Orange , New Jersey.

These Tuscarora, who may have been the descendants of the white women taken from Roanoke Island, were born with blue, green, or gray eyes. As time passed, the eye became more prevalent throughout the tribe, along with problems with white settlers.

Now a little bit after this passage, there is a section that talks about the testimony of a woman called Aunt Tamar.

Aunt Tamar, a former slaved who died at 127 or 129 years of age in the mid-1920s in Salisbury, Maryland was also part-Tuscarora and stated ther her great grandmother was Tuscarora and said they were cursed. "

Part of that curse turned out to be that the family was forced to go north . She did not want to go and stayed in Maryland and where the climate was warm and married an African slave.

It is not clear if Tamar or her family had the "Tuscarora Eye," but Hamilton did state that marrying African Americans eliminated it for a while in his family before it began to reappear in his generation.

DING! Went off in my head. From the picture I have of Rosa M. Jones, it appears she had brown eyes. She would have been born many generations after the time of the Tuscarora War.  I do not know what percentage Native American Rosa was but what I do know is that from her generation on forward married African Americans. Now, let's fast forward to the birth of my daughter. She is born to me, a woman of mixed ancestry, which includes African, Portuguese, Native American, and possibly Irish bloodlines and my husband who's background is Irish and English. 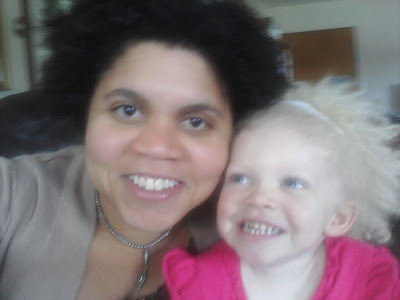 Yes, she has blue eyes. Hmmmm.

Then, the last thing that was the kicker. A few days after I had found all this out, I came across a site called "Sunbury: A History." It provides information about the area around Sunbury, PA., surrounding the confluence of the Susquehanna River.

The Tuscarora Path, named after the Tuscarora Indians, traveled from North Carolina through Path Valley to Shamokin. Some claim that it received its name after the original Tuscarora tribe was defeated and its survivors were forced to travel up this path to find refuge within the Iroquois Confederation (eventually becoming the sixth nation in the Iroquois Confederacy). Others claim that the Iroquois merely named the path Tuscarora because they viewed the trail as a means of connecting with their friendly neighbors.
The Tuscarora Path is now followed by Md. 57 and Pa. 75 north through Mercersburg, Fort Louden, and Port Royal; U.S. 11 from Sunbury and Northumberland to Pittston; Pa. 92 from West Pittston through Falls and Tunkhannock; U.S. 6 through North Towanda; U.S. 220 through Athens and Waverly; N.Y. 17 through Owego, Endicott, Johnson City, and Binghamton; and U.S. 11, a second time through Great Bend.


Guess where I live? Let's just say I live in the Greater Binghamton area and have lived here since I was in college. I can see  NY 17 from my house. Hmmmm.

Perhaps, somewhere deep down inside of me, part of my DNA knew it was coming home when I settled here.

Just another one of those things that make you go Hmmm.