William Bryant's was my 1st cousin 3x removed. Specifically he was the son of Rose Bryant, my 2nd great grandmother's sister. Rose Bryant I have found on only one census record and that is for the year 1880. I believe she may have passed away sometime before 1900 because I have only found her name listed only on one other document and that was on her son's death certificate.

Here's the 1900 census for Morehead City featuring the Bryant household:

The household consisted of Caroline, Jonas (referred to as Jane here),John, William and Frank. Jonas and John were Caroline's children, Frank was Jonas's son which leaves William but again no sign of Rose.
Perhaps Jonas, raised William like he was her own child.  That's me speculating, I don't know for sure what ever happened to her.

Recently, I decided to go through the process of reviewing records I had previously saved to my ancestors on my Ancestry.com family tree and really took a look further into the details listed on those records.  Specifically, I have really started looking at occupation information.

According to William Bryant's WWI Draft Card, he was a laborer at a fish factory owned by R. W. Taylor.

When I reviewed this I remembered that I had purchased a fabulous book called "Morehead City" by Jack Dudley earlier in the year and I said to myself I bet there is a reference to this R.W. Taylor in it. Well guess what? There was!

Here's the cover to the book: 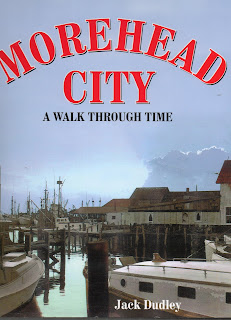 And here's a passage from the book which provides some information about the Menhaden fishing industry and the R.W. Taylor Fish Factory: 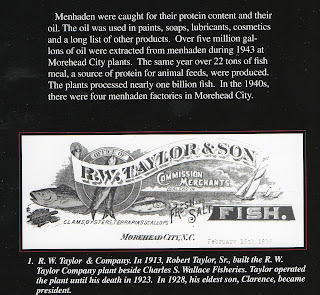 It's good to go back and review what you've researched from time to time. You never know what you might be missing.
Bryant family Military Monday