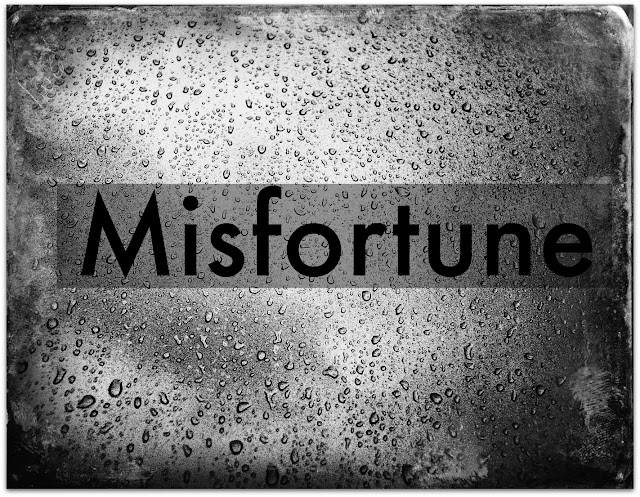 If you are not familiar with the 52 Ancestors in 52 Weeks Blog Prompt Series hosted by fellow blogger Amy Johnson Crow, please take a moment and check out the link here:  https://www.amyjohnsoncrow.com/52-ancestors-in-52-weeks/


Let's just say life has been incredibly busy so I am still working on March's prompts. Some day, hopefully soon I'll get caught up.

Week 12:  Misfortune
There is no family tree that has not has some misfortune. This week, I encourage you to explore some of it. It doesn't have to be a heart-wrenching tragedy. It could be a set-back in business or a missed opportunity. Write about something that didn't go the way your ancestor would have wanted or had planned.

This is the first time I've written about my great grand uncle Charles Lee Harrison. Before I get to his misfortune, I would like to share what I know of his life.

The most reliable evidence of his birth date I believe can be found on his Word War I Draft Registration form on which it lists his date of birth as December 22, 1895. He was born in Wilmington, NC to my 2nd great grandparents Rev. Thomas Duke Harrison and Mary Jane Williams Harrison. He was the 4th oldest of  their 9 children.

He married Mary L Stevenson on December 13, 1915 and the marriage produced 3 children --Mary, William and Dorothy.The family was living at 76 West St in New Bern, NC, according to the 1920 census. His occupation was a waiter in a hotel.

Sadly, the marriage did not work out and they divorced before 1930. Mary L Stevenson went on to marry James Carl Kemp and the children subsequently took their step-father's surname.

Charles Lee Harrison remained in New Bern, NC while his ex-wife and her new family resided in Brooklyn, NY. I can't imagine being apart from my kids. I can only imagine that must have weighed heavily on his spirit.

In 1940, he was living at 89 Bern St in New Bern with possibly a new wife. At this time, I haven't come across a marriage certificate for this Mary. I do believe this is a different woman from his first wife due to the difference in age. This Mary was born in 1915 while Mary L Stevenson was born in approximately 1897.

The last document I came across for Charles Lee Harrison gives detail about what misfortune befell him. 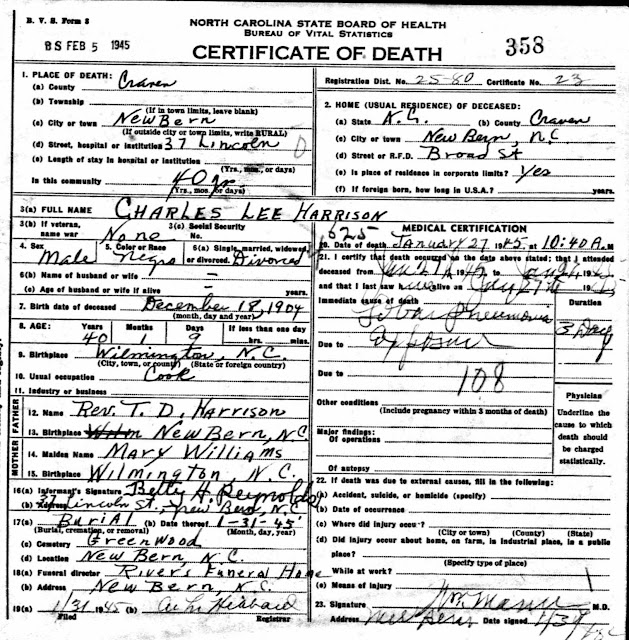 
He died January 27, 1945 from lobar pneumonia due to exposure.
I am assuming this was exposure to the elements and not some sort of chemical. His sister Betty H Reynolds was the informant on this document. She listed the address of his residence as Broad St, in New Bern and that her brother was divorced.  It appears that Charles's second marriage fell apart sometime between 1940 and 1945. Did he leave his wife or was he thrown out? His residence on Broad St...was that his place of employment at the Oil Well Lunch Room? I suppose I might not ever find out the answers to these questions. It's sad to see a life cut short.