May 14, 2018
If you are not familiar with the 52 Ancestors in 52 Weeks Blog Prompt Series hosted by fellow blogger Amy Johnson Crow, please take a moment and check out the link here: https://www.amyjohnsoncrow.com/52-ancestors-in-52-weeks/

Still playing catch up with these prompts. One day, I hope to get all  caught up.

Week 14: Maiden Aunt:  Write about one of your maiden aunts from your family tree. 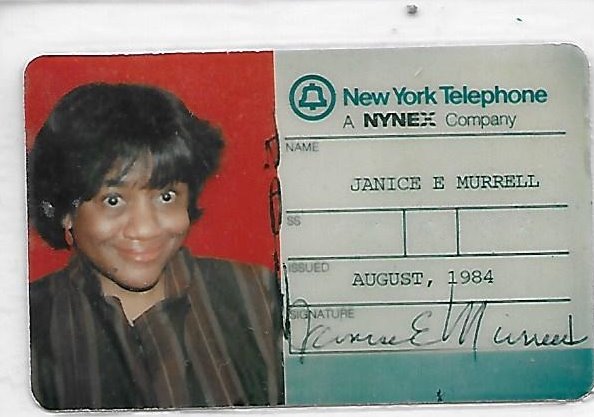 My Aunt Janice was a fun lady. Losing my father earlier this year, has made me reflect on those who passed on before him. I miss the sound of Janice's laughter. When she laughed, she laughed with her whole being. I miss that. I miss those fun times we had together going to the movies or seeing a Broadway show. She was my fun Aunt who worked for NYNEX in one of the original towers of the World Trade Center. I miss eating at a restaurant called The Big Kitchen that was in the basement of the North Tower. My aunt used to take my brother and I there for lunch. It was a fun atmosphere decorated with huge checkboard letters along the perimeter of the restaurant.
To my surprise, I was able to find pictures of this restaurant on a fellow blogger's blog. You can take a look at those here.
I miss her smile and her wisdom. She told me how the body produces vitamin D when you sit in the sun and how important it was for your body to get enough. She was a good spirit who passed on too soon. Here's a little bit about her life.

Janice Elaine Murrell was born on June 15, 1937 in New York City to Harold Murrell Sr. and Ethel Smith Murrell. She was their first child and was the apple of her father's eye. 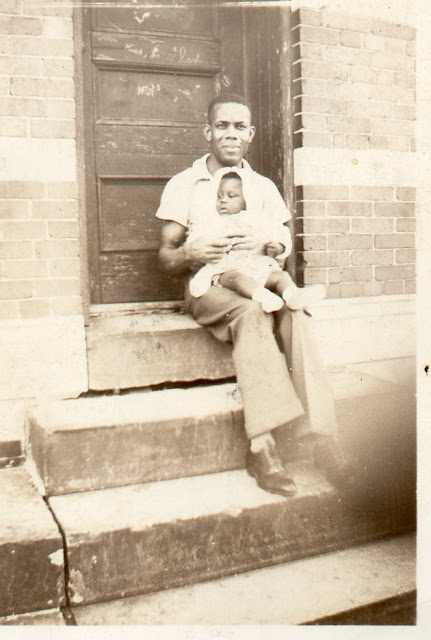 It's funny how little mysteries can sometime be solved as you begin to write up things. This picture of my grandfather and aunt I hadn't looked at in a while. After looking at it once more, I realized that a mystery picture I just inherited from my father was a picture of his sister when she was a baby. 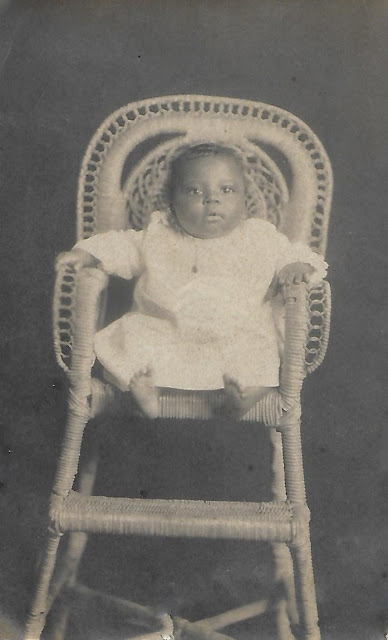 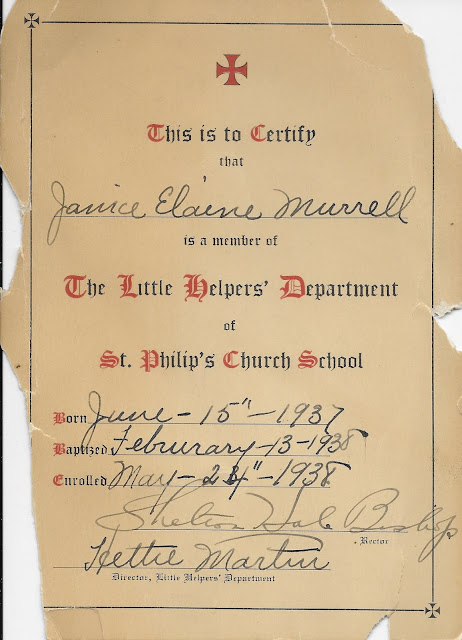 She was baptized on February 13, 1938 at St Philip's Episcopal Church in Harlem, NY. Apparently, she was one of the church's little helpers. 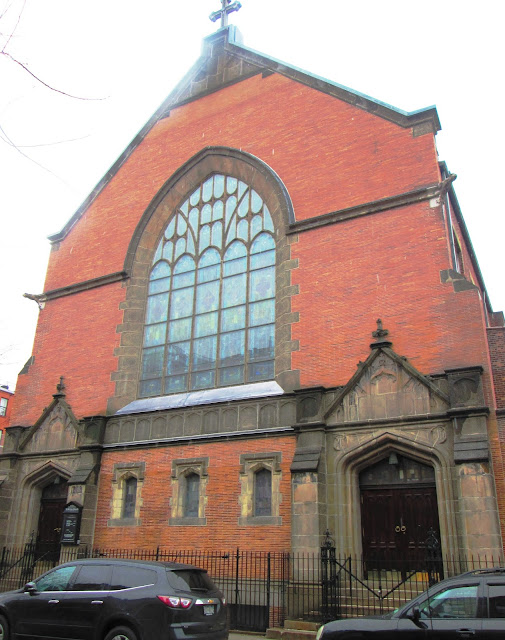 I did a Google search on one the name Shelton Hale Bishop listed on my aunt's "Little Helpers'" certificate and I was pleasantly surprised to find an interesting blog post by fellow blogger Leslie Ann of the blog Lost Family Treasures. She purchased a family photo album at a flea market and the photo album included a picture of Rev. Shelton Bishop. The Bishop/Carey photo album she was able to reunite with a distant relative.
To learn more about this story, check out the following links:  https://lostmementos.blogspot.com/2011/05/bishopcarey-family-photo-album-oh-what.html

Here's Janice listed with her parents in the 1940 Federal Census. My father didn't arrive on the scene until a year later. The family resided at 271 west 146th street in New York City that year. 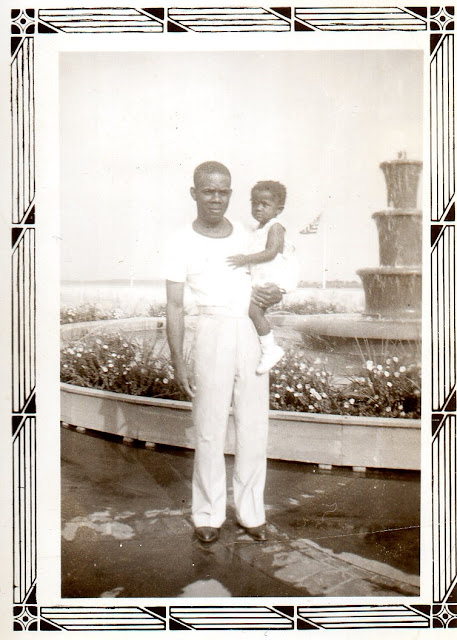 In her early years, she attended The Modern School at 411 West 154th St New York, New York. How do I know this you may ask, well her parents saved her report cards. My dad had a chest full of stuff that came from my grandparents house that I've been working on organizing and putting in albums. Here's a report card from September 1943. 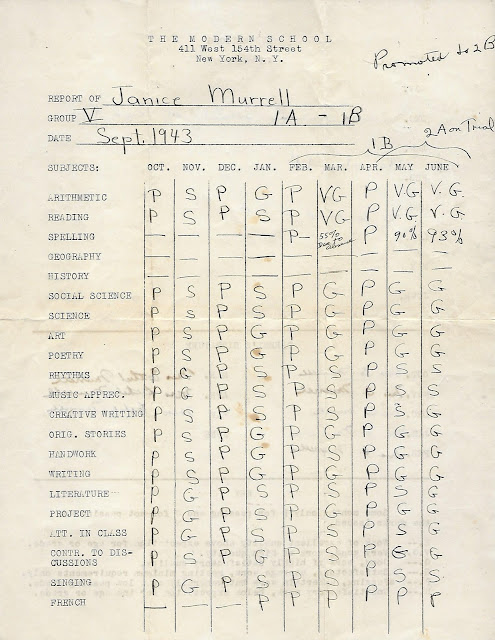 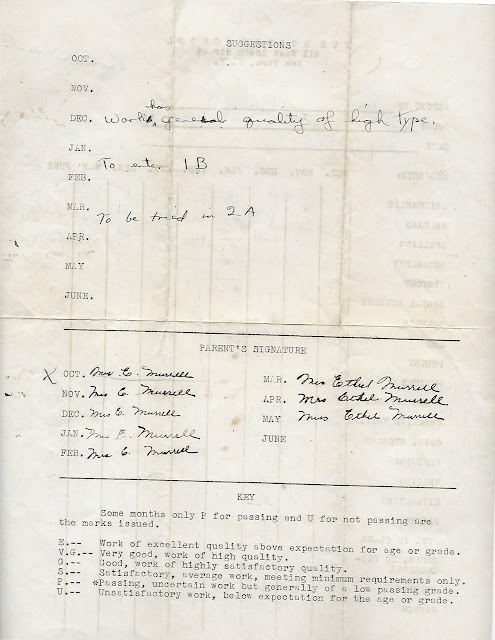 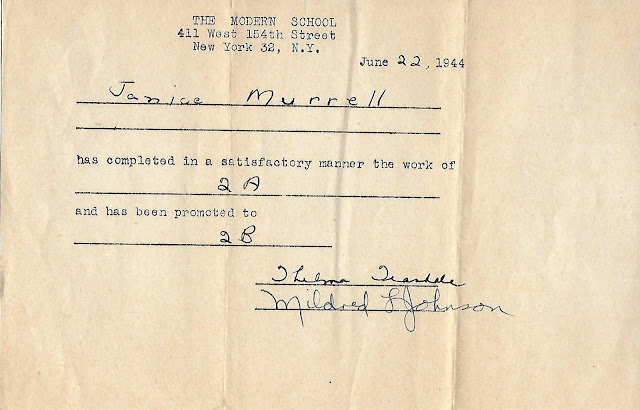 I did a little research on The Modern School and came across a great newspaper article about the woman who ran the school, Mildred Johnson, and it's connection to St Philip's church where my aunt was baptized.

I am quickly realizing that I have enough stuff to do more than one post on my Aunt Janice, so with that being said I am going to hit the pause button and pick up with this tomorrow.
52 Ancestors 2018 Edition 52 Ancestors in 52 Weeks 2018 Edition Murrell family