June 11, 2019
At last, some genealogy right?!! LOL. I decided to jump back into things with an Amanuensis Monday post. I have to thank a fellow genealogy friend of mine who helped me out a couple of months ago, Nathaniel Glasgow. He brought to my attention a deed which documents the sale of about an acre land from a woman named Charity Ambrose  to the trustees of Mt. Olive AME Zion Church in Riverdale, NC. Guess who's listed among the trustees. My maternal 3rd great grandfather and his son, Mortimer and Alfred Mitchell.

This deed made this 6th day of November in the year 1893 by Charity Ambrose of the first part of Craven County, and Mortimer Mitchell, Charles F. Hall, Anthony Dennis,  Edward Hooker, Killis Green, David Sampson, Phillis Borden, Ezekial Pastuer, and A. F. Mitchell of Craven County and State of North Carolina of the second part , Trustees of the Mt. Olive Church, African Methodist Episocpal Zion Church in America of No. 6 Township Craven County State of North Carolina. Witnesseth that said Charity Ambrose party of the first part for and in consideration of the sum of three dollars to her in hand paid by the said Mortimer Mitchell, Charles F Hill, Anthony Dennis, Edward Hooker, Killis Green, David Sampson, Phillip Borden, Ezekial Pasteur, & Alfred F Mitchell, parties of the second part, Trustees of Mt. Olive Church of Riverdale Craven County and state aforesaid, the receipt of which is hereby acknowledged hath bargained and sold and by these presents doth bargain , sell, release, and convey with the said parties of the second part, Trustees as aforesaid, their associates 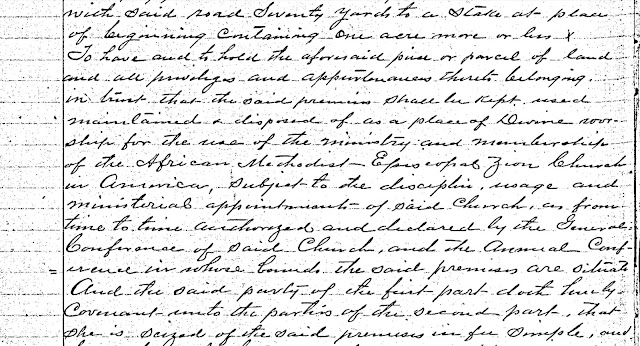 and successors in office, a certain piece or parcel of land in Craven County State of North Carolina adjoining the lands of the grantor and R. P. Williams and bounded as follows, Beginning at a stake on the West Side of the New Berne and Beaufort Road at a point where Fishers Avenue on to the said road and runs nearby West Seventy Yards to a stake in the rear of Mount Olive Church on the North side of an old road leading West from the said New Berne and Beaufort road, thence at right angles, parallel with said New Berne and Beaufort road. Seventy yards to a stake, thence at right angles nearly East Seventy yards to the New Berne & Beaufort road with said road Seventy yards to a stake at place of beginning containing one acre more or less. To have and to hold the aforesaid piece or parcel of land and all privileges and appurtenances thereto belonging in trust that the said premises shall be kept used maintained or disposed of as a place of Divine worship for the use of the ministry and membership of the African Methodist Episcopal Zion Church in America, subject to the discipline, usage, and ministerial appointments of said church, as from time to time authorized and declared by the General Conference of said Church, and the Annual Conference in where bounds the said premises are situate And the said party of the first part doth hereby covenant unto the parties of the second part, that she is seized  of the said premises in fee simple, and hath the right to convey the same in fee simple & that the same is free from all encumbrances and that she will warrant and defend said title to the same against the lawful claims of all persons whatsoever. In testimony whereof , the said Charity Ambrose party of the first part hath hereunto set her hand & seal the day & year above written.
Signed, sealed & delivered                her
Charity  X   Ambrose      seal
mark
in presence of Owen L W Smith.

North Carolina = Craven County = The execution of the foregoing deed was this day proven before me by the oath & examination of Owen L W Smith the subscribing witness thereto. Let the same with this certificate be registered. Witness my hand & official sine at New Berne N.C. this 7th day of Nov 1893. W. M. Watson Clk sup Filed for registration 10 o'clock AM Nov 7th  1893. J W Biddle
Reg of Deeds.

So yeah, it's Tuesday now that I'm finally finishing this post but hey here it is. Things are a bit busy these days this way. I have to squeeze in doing genealogy whenever I can.

If you missed my posts about my 3rd great grandfather Mortimer Mitchell, here are some links:

52 Ancestors: #10 --Mortimer Mitchell --In Search Of Opportunity And Security


Amanuensis Monday is a blog prompt that was developed by John Newmark at Transylvanian Dutch, encourages bloggers to transcribe family letters, journals, audiotapes, and other historical artifacts. (An amanuensis is someone employed to write what another dictates or to copy what has been written by another.)  For other great daily blog prompts be sure to check out GeneabloggersTribe.
Amanuensis Monday Ambrose Craven County Craven County Register Of Deeds Deeds Mitchell Mitchell Family Mt Olive AME Zion Church Mt Olive Cemetery