I am still participating in the 52 Ancestors in 52 Weeks Challenge put forth by Amy Johnson Crow of the blog No Story Too Small. If you aren't familiar with the challenge be sure to check out her blog. I am a bit behind on this prompt but I figure, I will just keep doing the best I can about getting these posts out there.

I wish I knew as much about my 2nd great grandmother, Mary Jane Williams Harrison, as I know about her husband Thomas Duke Harrison. Someone out there in the cyber-universe may know something so that's why I wrote this post. Maybe my words might find them.

First, let me tell you I had a bit of  luck with Mary, when the 1940 Federal Census was released. My ancestor was one of the people chosen to answer the supplementary questions. Here's a copy of the form:

Items of interest from this section: 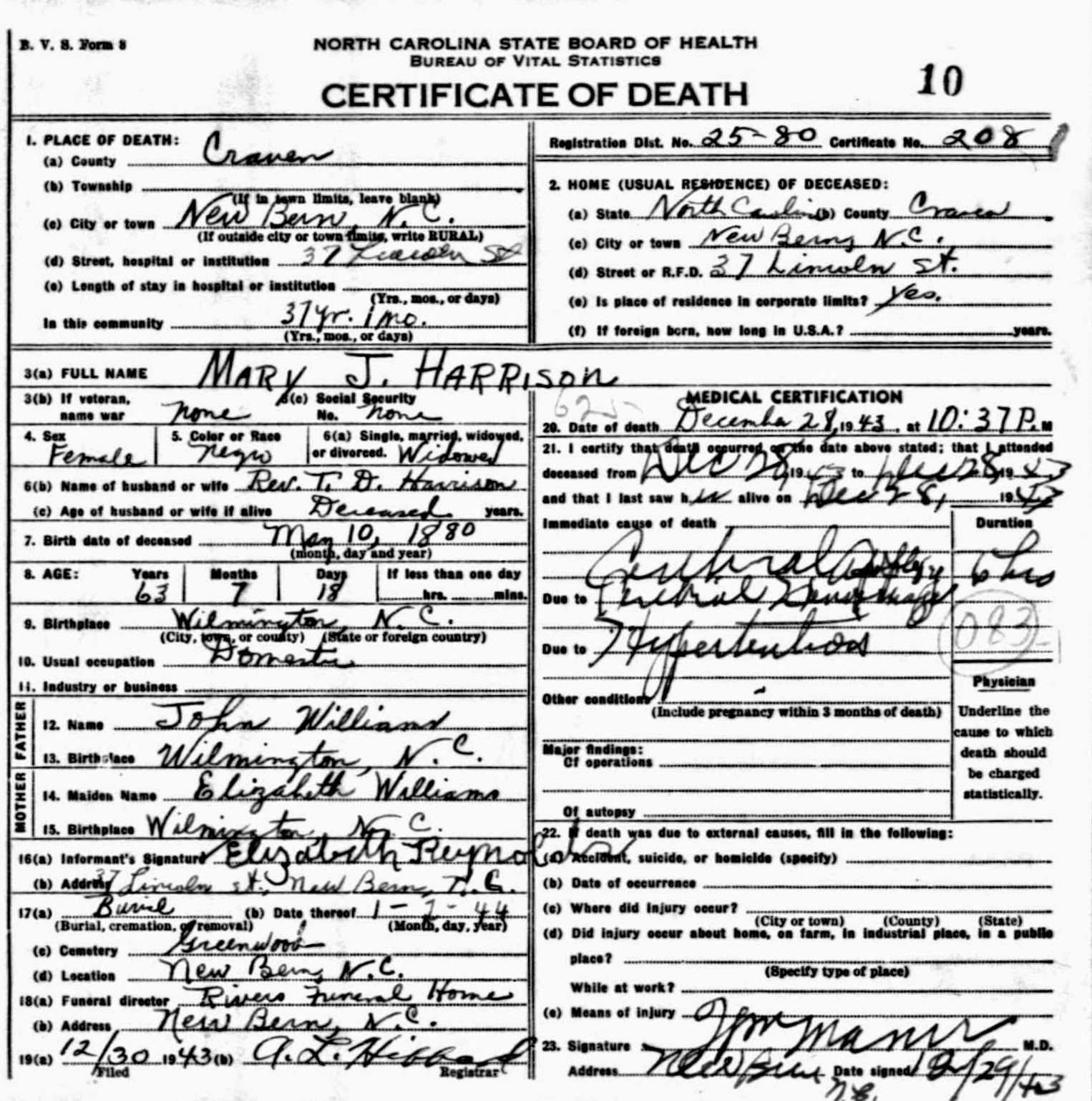 Again the 1940 Federal Census was a blessing because it provided another clue.

She was born in Sampson County, NC! Thank you 1940 census.

So with that piece of information, I think am now able to trace her movement from Sampson County to Wilmington, and then finally to New Bern.

I believe she was born on or around  May 10, 1870 in Clinton, Sampson County, NC and I think this may be her listed on the 1870 census with her mother.

Mary's mother, Betsey/Elizabeth was listed working as a cook for the family of Nathan and Julia Bell. It was noted that little Mary was born in May 1870. With no sign of John Williams listed in the census pages before and after Betsey, it brought to mind the question, "Was John Williams really Mary's father? Hmm.

This may be John and Betsy Williams on the 1880 Federal census in Wilmington, NC. Where's Mary? Could Mary have been living with another relative or perhaps with someone she worked for?

Mary Jane Williams married the Rev Thomas Duke Harrison on June 14, 1887. Their marriage license you can view on my post, Amanuensis Monday On Tuesday: Thomas Duke Harrison and Mary J. Williams Marriage Certificate. On the license it was noted that Mary's parents were a John and Betsy Williams and that they were deceased.  Were they really deceased at the time?  I had found some of the information on the marriage license to be incorrect. For example, it was written that T. D. Harrison's father went by the same name as his son. Thomas's father was actually a Simon Harrison. On the license it was also noted that parents of Mary J. Williams were deceased. The reason why I think that this may be incorrect is shown on the 1900 Federal census. Who's living next to the Harrisons in Wilmington in 1900?

It's hard to see but it shows a John Williams and a Bettie Williams enumerated just after T. D. Harrison and his wife Mary. Grandparents do have a tendency to want to be near their grandchildren. I am just saying. :)

In any event this is where the trail for John and Betsy/Elizabeth Williams runs cold. I have a feeling my 3rd great grandparents died sometime between 1900 and 1919 because their daughter made the move to New Bern by 1919.


The family resided in an area of the city called Duffyfield. The original address was 37 Lincoln Street but when addresses were eventually updated in New Bern, the street number was changed to 1510.