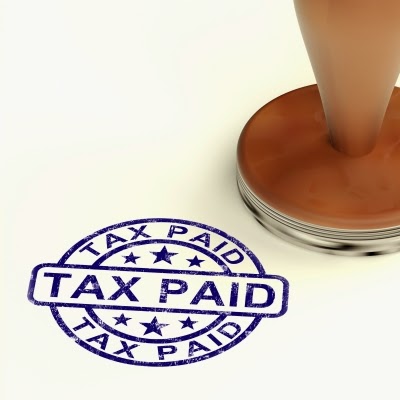 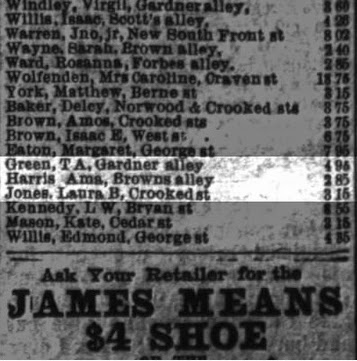 
If anything, I know that my maternal 3rd great grandmother, Amy Brown Harris, paid her taxes. The newspaper article highlighted above has her name misspelled, but nonetheless it is her. She paid them again in 1891. 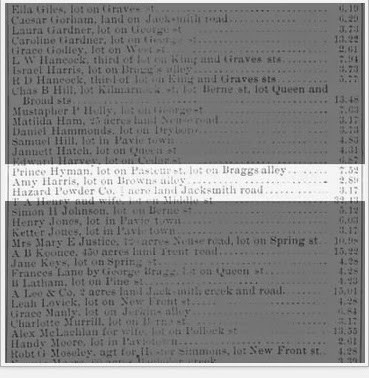 Amy/Amey Brown was born around 1830 in Jones County, NC based on information found on the U. S. Census and her daughter, Sarah Jane Harris Whitney's death certificate.  I wish I could say I knew more about the circumstances of her birth, but sadly I do not. She died before 1900, so there's no death certificate I can refer to to determine who her parents were. I was hoping that I might be able to find an obituary for her in one of the New Bern newspapers of the time, but so far no such luck. Besides these newspaper clippings, I have found her noted on the 1870 and 1880 census.

Here she is in 1870 with her husband Bristow/Brister Harris and two children, Sarah (my 2nd great grandmother) and Lemuel. It is interesting to note that she and her children were listed as mulatto. This makes me wonder more about her background. Who were her parents? Was her father white and mother a slave? Or perhaps her white ancestor was a little further back on the family tree? Only two children were shown living with her. I can't help but think that there must have been others. How many? Oh if I only knew.

The Harris family lived on the "Alley With No Name" in 1880. I believe that this may in fact be a reference to what would be later named 10 Brown's Alley.  This is the same property that was referred to "as that certain parcel of land in the city of New Bern, known as lot No. 100" in a deed made out to Annie Harris (Amy), Sarah Jane Harris, and Sarah's then fiance Samuel Whitney on July 10, 1883. To view the whole deed, take a look at my post, Samuel Whitney Makes a Puchase.  Amy had a life estate, with her interest in the property ending with her death.

I imagine that Amy probably contributed whatever she could towards the funds necessary to make this purchase. Perhaps this was Amy's way to ensure her daughter would have a roof over her head when she was gone.

Was it a coincidence that the street was called Brown's Alley? Lots of questions and not so many answers.

Brown's Alley is now referred to as Hatties Lane in the city of New Bern.

I am participating in the 52 Ancestors in 52 Weeks Challenge put forth by Amy Johnson Crow of the No Story Too Small. If you aren't familiar with the challenge be sure to check out her blog.
Brown family Harris family New Bern Whitney family