In The Meantime, Let Me Get Down To The Transcribing. 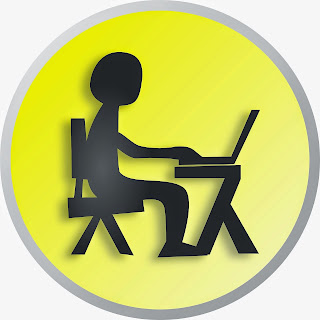 In my last post regarding my Sampson County kin, 52 Ancestors 2015 Edition: #17 Gabriel Kerr --Putting Together The Pieces Of His Story, I had come across a newspaper article that discussed briefly the illnesses suffered by individuals in the black community of Lisbon township and how "some fifteen deaths had occurred in close succession." The article was from the Semi-weekly Messenger dated April 30, 1896. I suspect this is how and when a number of folks from my Kerr family line may have died including my 2nd great grand uncle, Gabriel Kerr. I was hopeful that there would be some other mention of this in newspapers of the time or perhaps an obituary for one or more who died. No such luck. Darn. I will keep looking though. In the meantime I have a bunch of deeds that need transcribing, so no better time than the present to get started.

This deed is regarding land Gabriel Kerr purchased from Edward Rich on March 20, 1873. This was just 14 days after Gabe and his father Jacob were issued a deed for quite a large section of land in Sampson County, NC that I featured in my post Jacob and Gabe Kerr Purchase Land. 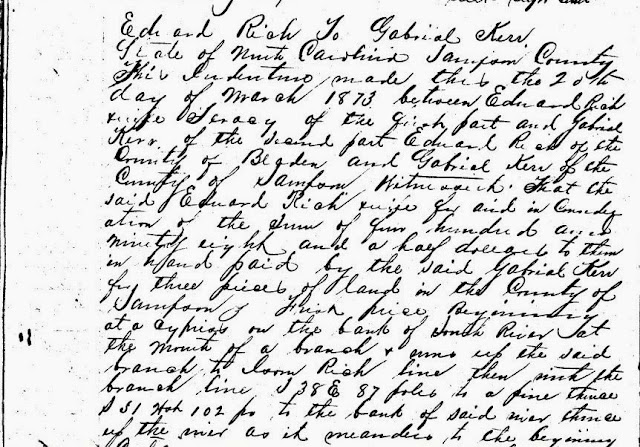 Image courtesy of the Sampson County Register of Deeds

Edward Rich To Gabriel Kerr
State of North Carolina Sampson County
This Indenture made this the 20th day of March 1873 between Edward Rich wife Teracy of the first part and Gabriel Kerr of the second part Edward Rich of the County of Bladen and Gabriel Kerr of the County of Sampson. Witnesseth, That the said Edward Rich wife for said in consideration of the sum four hundred and ninety eight and a half dollars to them in hand paid by the said Gabriel Kerr for three pieces of land in the County of Sampson.  First piece beginning at a Cypress on the bank of South River at the mouth of a branch & runs up said branch to Isom Rich line then with the branch line S 38 E 87 poles to a pine thence S 51 West 102 poles to the bank of the said river thence up the river as it meanders to the beginning. 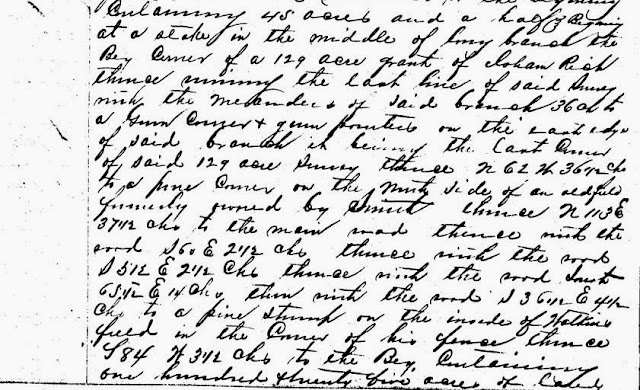 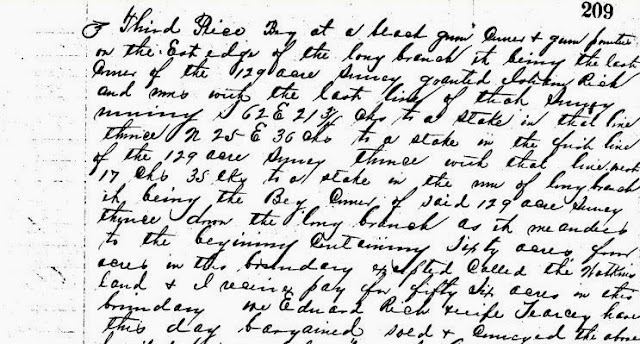 Third Piece Beg at a beach green corner & green pointes on the East edge of the long branch it being the last Corner of the 129 acre Survey granted Isham Rich and runs south with the last line of that Survey running S 62 E 21 3/4 chs to a stake in that line thence N 25 E 36 chs to a stake in the first line of the 129 acre survey thence with that line west 17 chs 35 chs to a stake in the run of long branch it being the Beg. Corner of said 129 acre Survey thence down the long branch as is it meanders to the beginning containing sixty acres four acres in the boundary exempted called the Watkins land & I receive pay for fifty six acres in this boundary me Edward Rich wife Tearcey have this day bargained sold & conveyed the above 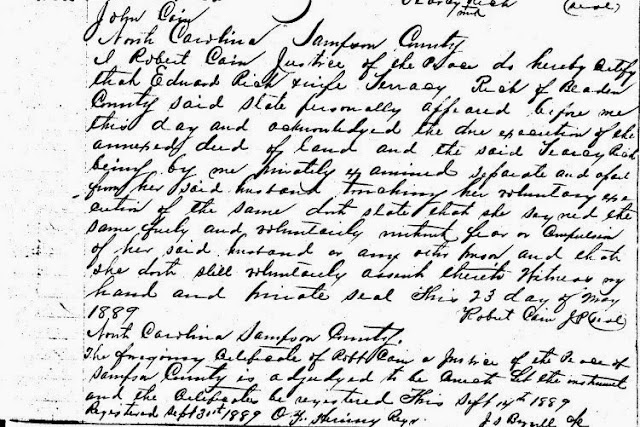 North Carolina Sampson County,
The foregoing certificate of Robert Cain a Justice of the Peace of Sampson County is adjudged to be correct. Let the instrument  and the certificates be registered This September 14th, 1889