Digging In the Dirt --Part Two: Who Was Jonathan Hawkins? 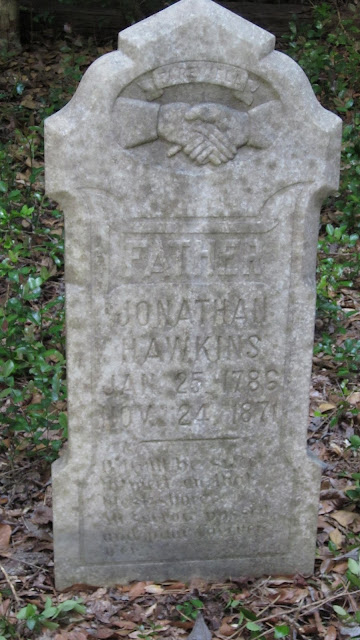 I see you Jonathan Hawkins. What I have right now is just circumstantial, but I believe there is a link between this man and my Jones family line who originated from Onslow County, NC.

If you missed Part One to this series, click here.

According to the stone at his grave, Jonathan Hawkins was born on January 25, 1786 in Onslow County, NC. He was a wealthy farmer who also owned and ran a salt works. He had at least 3 children, 2 sons John D Hawkins and William H Hawkins who also resided in Onslow County, and a daughter, Julia Ann Hawkins Eason. 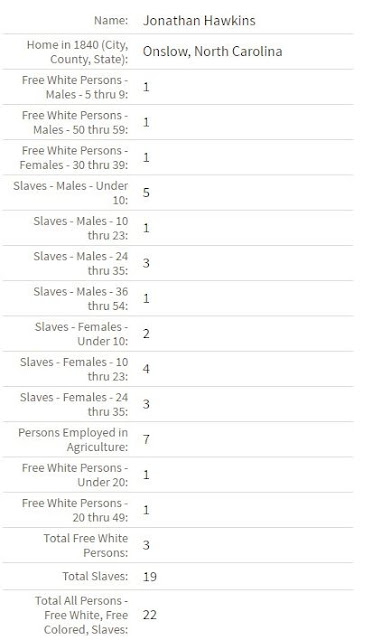 You can see that things changed dramatically for Jonathan Hawkins by 1840. I believe the influx of slaves was due to an inheritance from his father. Could some of these slaves be from my Jones family line? It is a possibility. Let's take a look.

In 1840, my 3rd grandparents Cesar and Mary Jones would have been, 26 and 17 years old. Their oldest child Louis Oliver Jones would have been about 2 years old. If the family resided together, could they have been among the slaves belonging to Jonathan Hawkins? The answer: Yes, it's possible. For the 1850 census, the Jones household would have looked something like this. That is of course if they were lucky enough to be living together.


I kept in mind that ages are an approximation when reviewing slave schedules.When I review through documents, I generally look for someone who's age is within +/- 3 or 4 years of the age I am looking for. In the 1850 Slave Schedule  for Jonathan Hawkins I found an entry that may or may not have been for my for my Cesar Jones. (There's an entry that looks like it was written over. It looks like it started out as a 27 year old male but then possibly changed to 37.) I did find possible candidates for my Mary, Louis Oliver, Carolina and Violet. If Cesar was once owned by Jonathan Hawkins he could have been sold or maybe hired out. Of course he might not have been owned by Jonathan Hawkins at all.

I checked the 1860 slave schedule for Jonathan Hawkins and found there were possible matches for all members of the Jones family.

I decided to go back to the testimony that my 2nd great grand uncle Carolina Hawkins provided in his Civil War pension file that I featured in my post from May 27, 2015.


Have you ever been known by any name other than that given in your application for pension? If so, state it in full

Answer, When I arrived home from the army I found my family had changed their names to Jones.

Hmm... Changed their name to Jones. Makes me think that Carolina, his siblings as well as his mother Mary all went by the surname Hawkins except perhaps for Cesar.

Were you in the military or naval service under a name different from that which you are now known? If so, state what it was.

Answer, Carolina Hauckins my father was a slave and I took the name of my master name Hauckins

I am really starting to lean toward the idea that Cesar was probably owned by someone else. Someone more than likely with the last name Jones. I have a couple candidates for who I think that individual might have been but that will have to wait until my next post.

I did find some other interesting tidbits about Mr. Jonathan Hawkins. In the beginning of this post, I mentioned that he owned a salt works in Onslow County, NC as well as a farm.

How did I find out about the salt works? I did some Googling using the search terms "Jonathan Hawkins,""salt works," and "Onslow" and found a couple of interesting newspaper articles. 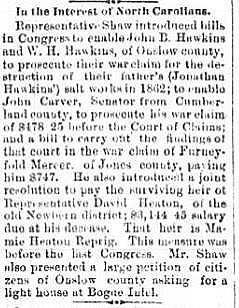 
So Jonathan Hawkins's salt works was destroyed in 1862 during the Civil War! Union troops must have come through Onslow County, NC. This newspaper article was from February 1891. Jonathan Hawkins's died in November 1871. So some 20 years after the death of their father and almost 29 years after the destruction of the salt works, William and John Hawkins were still trying to get reimbursed for damages.

Here's another article that provides some additional details about the Union Army coming to Onslow County. 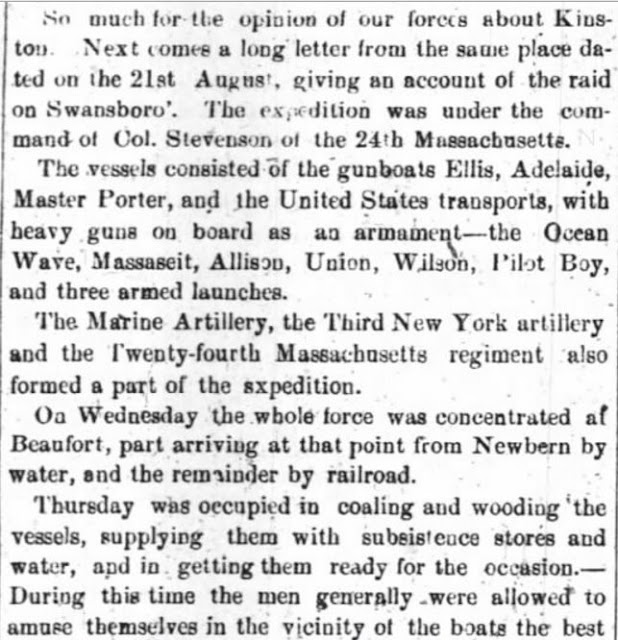 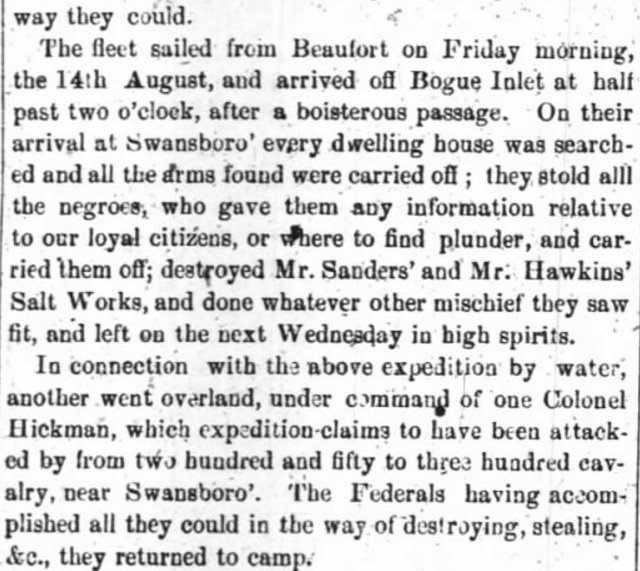 This is helpful because I now know exactly when Union forces arrived in Onslow County --August 14, 1862. The mention of "all the negroes, who gave them any information" were "carried off" makes me think this was when my Jones family made the move to Morehead City in Carteret County, NC. Carteret County was under Union protection at this time. My 2nd great grand uncle Carolina Hawkins enlisted in the 37th USCT, Co. A in Beaufort, Carteret County on December 26, 1863.

I love how newspapers can provide additional details about a particular time period.