October 24, 2016
So I finally, had a pinch of spare time to do something genealogy related today and I mean a pinch. That's okay. For the forseeable future that's what it's going to have be like here on my blog. My kids and I have activities that take us out of the house most evenings and free time literally has to get carved out from another activity's designated time. Right now I'm supposed to be doing housework. Oh well, vacuuming is going to have to wait.

Back in January of this year, I shared an entry I found in the North Carolina, Freedmen's Bureau Assistant Commissioner Records, 1862-1870 record group on FamilySearch.org that mentioned my 3rd great grandfather Bristow/Brister Harris. You can read that post here. The entry I featured before gave a brief description of a lease agreement that my 3rd great grandfather made in 1865 to work the lands of a man named Stephen Barrington who supported the confederacy.  Stephen Barrington had abandoned his property once New Bern fell under Union occupation in 1862. 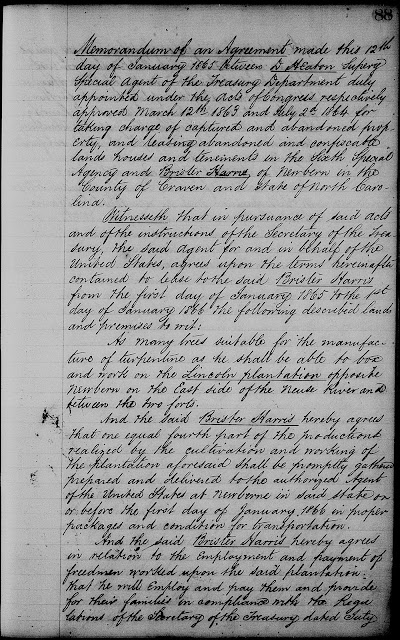 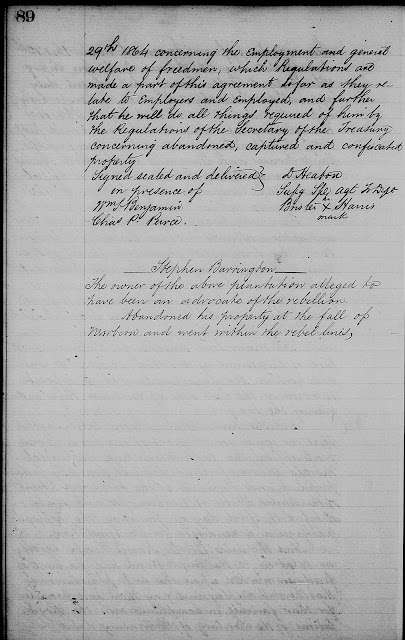 Memorandum of an Agreement made the 12th day of January 1865 between D Heabon Supery Special Agent of the Treasury Department duly appointed under the acts of Congress respectively approved March 12, 1863 and July 2, 1864 for taking charge of captured and abandoned property and leasing abandoned and confiscable lands houses and tenements in the Sixth Special Agency and Brister Harris of New Bern in the County of Craven and State of North Carolina.

As many trees suitable for the manufacture of turpentine as he shall be able to box and work on the Lincoln plantation opposite New Bern on the East Side of the Neuse River and between the two forts.

And the said Brister Harris hereby agrees that one equal forth part of the production realized by the cultivation and working of the plantation aforesaid shall be promptly gathered prepared and delivered to the authorized Agent of the United States at New Berne in said state on or before the first day of January 1866 in proper packages and condition for transportation.

And the said Brister Harris hereby agrees in relation to the employment and payment of freedmen worked upon the said plantation that he will employ and pay them and provide for their families in compliance with the Regulations of the Secretary of the Treasury dated July 29th 1864 concerning the employment and general welfare of freedmen, which Regulations are made a part of this agreement so far as they relate to employers and employed and further that he will do all things required of him by the Regulations of the Secretary of the Treasury concerning abandoned, captured and confiscated property

Stephen Barrington
The owner of the above plantation alleged to have been an advocate of the rebellion. Abandoned his property at the fall of New Bern and went within the rebel lines.

After I found this agreement, I took some time to brainstorm and think of ways I could learn more about my Bristow Harris. I asked questions.

1) Why this piece of land?
2)What was Bristow's connection to it? Was there a connection to the man who originally owned it--Stephen Barrington?
3) Was his choice to lease this particular piece of land linked to his occupation as a cooper.
4)Could I pinpoint where the land he leased was located?

If you are new to my blog or just missed my posts regarding my 3rd great grandfather Bristow Harris here's the links to those:
52 Ancestors: #22-- Bristow Harris Or Was It Bristoe, Brister or Bristol?

I'll have answers to these questions in my next post.