52 Ancestors: #22-- Bristow Harris Or Was It Bristoe, Brister or Bristol?

September 11, 2014
You could say I have fallen behind a bit on the 52 Ancestors Challenge. Well, life happens sometimes so I've decided to do the best I can with posting. If you aren't familiar with the challenge put forth by Amy Johnson Crow of the blog No Story Too Small, click here. 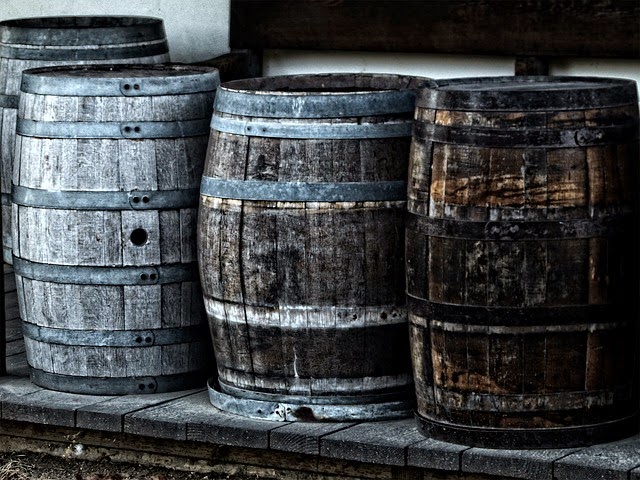 No matter how you say it, Bristow, Bristoe, Brister, or Bristol Harris, he still was my 3rd great grandfather. I believe he was a man with ambition which is a trait he passed on to a number of his descendants, a couple of which I will be mentioning in upcoming posts. In any event, I wonder if the barrels he spoke of in this deposition dated September 30, 1872 for a William Merrick, looked something like the ones pictured above.

I with others, was employed by Wm Merrick to make the tar. I cannot now say how much tar there was, I am of the opinion there was over a hundred barrels. The provost martial paid me for my work in making the tar, what he did with it I know not and further this deponent saith not.

This deposition was from a Southern Claims Commission Claim for a William Merrick. Apparently, he employed my 3rd great grandfather during the Civil War when New Bern was Union occupied. The Union Army took for use in the war some of the provisions made by Mr. Merrick. Bristow Harris's employer sought reimbursement from the government for these items. You can read more about this deposition on my post Amanuensis Monday: Deposition Of Bristow Harris Found In A Southern Claims Commission Claim.

I am a descendant of Brister Harris's second family who resided in New Bern, NC. Here's what I know about Bristow's life so far.

On my post, My Harris Family Line --Part one, I featured the 1870 and 1880 Federal Censuses that show Bristow's second family who lived in New Bern, NC. That family group featured Bristow, my 3rd great grandmother, Amy Brown Harris, and two children, Sarah and Lemuel T Harris. I am descended from Sarah who went on to marry a Samuel Whitney. On a Freedman's Bank Records entry dated December 28, 1872 for Bristow Harris, his age was listed as 47 which would make his approximate year of birth 1825. I say approximate because on the deposition he made in September of the same year, his age was listed as 53.  Oh well, at least I have a ball park time-frame for the year of his birth being between 1820--1825. How lucky was I to find the names of his parents, brothers, sisters, and children listed on this record?! 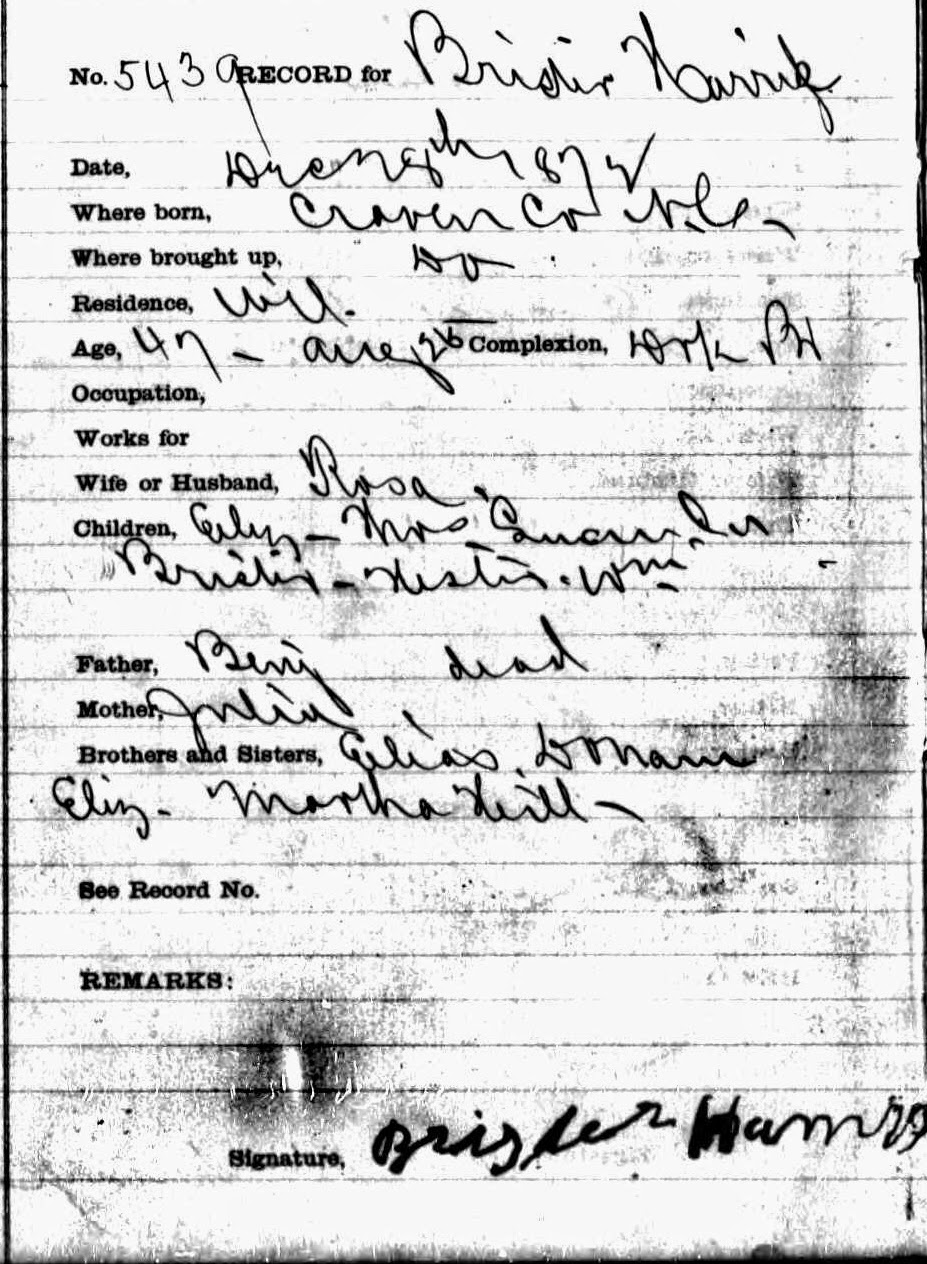 It's important to note, that Bristow listed his place of residence in 1872 as Wilmington, NC. My current thinking is that perhaps Bristow Harris's occupation as a boatman had him traveling back and forth between Wilmington and New Bern. The Battle of New Bern took place on March 14, 1862. From that point on, the Union Army occupied the city until the end of the Civil War. It would have been in Bristow's best interest to stay in a place where there was the opportunity for work and protection from the Confederacy.

These are the children who who I believe were born to Bristow Harris and Rose "Rosa" Anderson in Wilmington.


These are the children born to Bristow Harris and Amy Brown in New Bern.

By looking at the approximate dates of birth of my 3rd great grandfather's children, you can get the sense of which city was really his primary residence. I don't even know if he was ever officially married to either Amy Brown or Rose(a) Anderson. The start of the Civil War led to Bristow being separated from his Wilmington family. With probably limited or no contact with his loved ones there, this separation must have been terribly hard on him. I can understand how and why he started a relationship with my 3rd great grandmother, Amy Brown. Thankfully he did, otherwise I wouldn't be here right now. :)


It had been awhile since I reviewed what I knew about Bristow Harris. I am happy to say there there seems to be a ton more city directories now available online than a couple of years ago. I was able to find him listed in a few.

Wikipedia's definition of a cooper:

Traditionally, a cooper is someone who makes wooden, staved vessels, bound together with hoops and possessing flat ends or heads. Examples of a cooper's work include but are not limited to casks, barrels, buckets, tubs, butter churns, hogsheads, firkins, tierces, rundlets, puncheons, pipes, tuns, butts, pins and breakers.

You could say my 3rd great grandfather knew something about making barrels then. Anyway, I was able to find him in the following city directories as well:

Sheriff's Wilmington, N.C. directory and general advertiser for 1877-8 : containing a general and complete business directory of the city : as well as a complete post office directory of Virginia, West Virginia, and North Carolina (c1877)
Image courtesy of Internet Archive.

Directory of the city of Wilmington, North Carolina (1889). Published by
Julius A. Bonitz. Image courtesy of Internet Archive.

So with this information I plotted out on a map the approximate neighborhood in which Bristow Harris lived in.

Eagle Island is marked with the yellow arrow. Bristow resided somewhere on the island in 1875. All the other directory listings point to an area I have marked in red. I have included the link to the North Carolina Maps online collection, where you can see a view of a map of Wilmington, N.C. from May 1889. Just click here.

I believe the corresponding area on the 1889 map to be square 59.

According to his 1872 deposition, Bristow resided on West St in the city of New Bern. Here's a view of that neighborhood.


The yellow arrow points to West St. The red notation is the approximate location of where Bristow's daughter, Sarah Harris Whitney eventually purchased land with her husband, Samuel Whitney and mother, Amy Brown Harris in 1883.

The 1900 city directory listing is the last record I've been able to find for Bristow Harris. Not too long ago, I found a newspaper article about one of his sons dated 1903 that mentioned his father had passed away in the city of Wilmington just a few years before the article was printed. This narrows down when he died to somewhere between 1900--1903.

I am proud of Bristow for many reasons. He survived slavery. Yes, he was once a slave. I will go over what I know about that in a future post. I know that he could read and write. He learned a trade and was a cooper as well as a boatman. He eked out a living and provided support for his loved ones. He was my 3rd great grandfather.