April 17, 2012
So I had every intention of writing this post yesterday, but you know how it is when you first get back from vacation. The day simply wasn't long enough yesterday for me to get everything that I wanted to get done done, so here is Amanuensis Monday on Tuesday.
To my delight when we returned home from vacation I found a couple of letters in my mailbox from the North Carolina State Archives. Woohoo! I love getting genealogy stuff in the mail. Anyway, I recently had sent in a request for a copies of the marriage certificate for my 2nd great grandparents, Thomas Duke Harrison and Mary J. Williams and some other marriage records for other ancestors. Here is the marriage certificate for T. D. Harrison and Mary J. Williams. 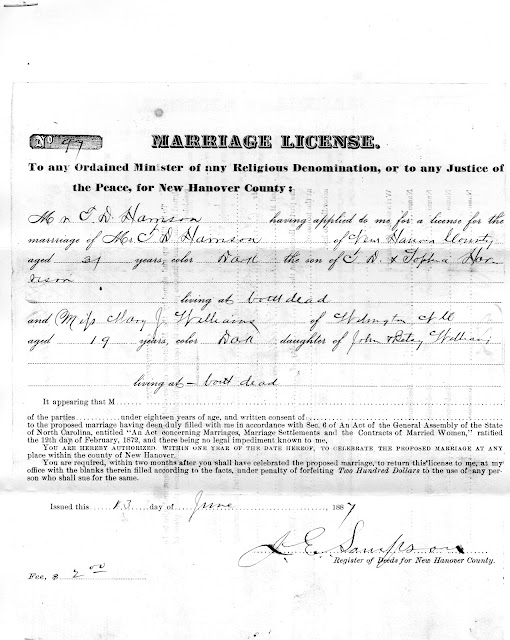 To any Ordained Minister of any Religious Denomination, or to any Justice of the Peace, for New Hanover County:

It appearing that M____________________________________________
of the parties ________under eighteen years of age, and written consent of ____________________
to the proposed marriage having deen duly filled with me in accordance with Sec. 6 of An Act of the General Assembly of the State of North Carolina, entitled "An Act of Marriages, Marriage Settlements and the Contracts of Married Women," ratified the 12th day of February 1872 and there being no legal impediment known to me,
You Are Hereby Authorized, Within One Year Of The Date Hereof, To Celebrate The Proposed Marriage At Any place within the county of New Hanover.
You are required, within two months after you shall have celebrated the proposed marriage, to return this license to me, at my office with the blanks therein filled according to the facts, under penalty of forfeiting  Two Hundred Dollars to the use of any person who shall sue for the same. 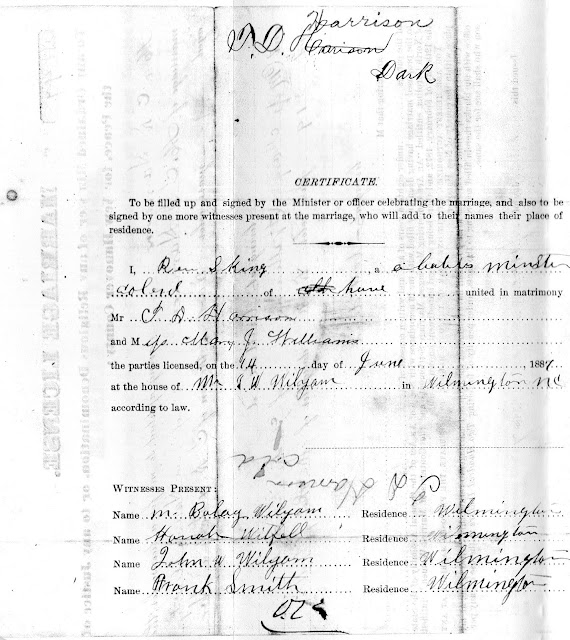 
To be filled up and signed by the Minister or officer celebrating the marriage and also to be signed by one or more witnesses present at the marriage, who will add to their names their place of residence.

I, Rev S King, a (unsure of word) minister colored of have united in matrimony Mr T D Harrison and Miss Mary J Williams the parties licensed on the 14 day of June 1887 at the house of Mr J W Wilyam in Wilmington NC according to law.

Now this certificate I have found to be rather intriguing for several reasons. Prior to receiving this certificate the only information I knew about the parents of Thomas and Mary was what was found on their death certificates. According to his death certificate, Thomas Duke Harrison's parents were a Simon D. Harrison of New Bern, NC and Sophia Boyd of Beaufort, NC. Thomas's wife Mary was the informant on the document, so I felt fairly confident about the information she reported. So it was a bit of a surprise to see on the marriage certificate that his father's name was listed as T. D. Harrison, not Simon D. Harrison. Perhaps this was an error. On Mary J. Williams's death certificate it reads that her parents were a John and Elizabeth Williams both from Wilmington so that seems to match up since Betsy is a common nickname for Elizabeth. Isn't it always the case that when you receive more information it only leads to more questions? Were my 3rd great grandparents ever officially married somewhere or was their union a common law union? Was my 3rd great grandfather's name Simon or was it in fact T. D. or Thomas Duke just like his son?  Who are the people listed as witnesses? Looks I have some more digging to do. 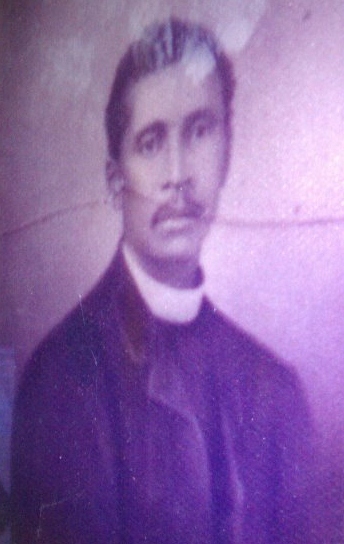