My Best Genealogy Find Of The Year Was...

This month Elizabeth O'Neal has two theme ideas for posting. The second is a Cookie Exchange where you can share your favorite holiday cookie recipes.I have to admit my family wasn't much into baking cookies during the holidays when I was kid. My family made pies. Perhaps, it's time to start a new tradition though. I am eager to see what recipes bloggers share as part of the blog party.


Back in June of this year, I received notification a DNA match on my father's side of the family. You can read about that in this post,  Another DNA Cousin Connection! Woohoo! This Time Through My Paternal Line

This connection was special because I gained a whole bunch of cousins who are descended from my paternal grandmother's sister, Edna Smith Dix.

What I haven't had a chance to reveal until now is that I have been able to track down where the descendants of a Bryant Henry Kerr Sr. eventually settled. First of all, who was he? It turns out he was another child of my 3rd great grandparents Jacob Kerr and Clara Kerr. Here's a look at this branch of my family tree.

A couple of years ago when I started researching my 3rd great grandparents, I found them listed on the 1880 Federal census for New Hanover County, NC.

Jacob and Clara Kerr had many of their children, as well as, four  grandchildren residing in their household. I traced their grandson, Bryant Kerr's movements through the census and learned ...

...that Bryant Henry Kerr Jr. had moved to Berrien County, Ga by 1900 with a brother named George. They were working as day laborers on a farm. (I've only had time to do  cursory research on this newly found brother. I haven't found any other documents yet that mention him but I will keep looking.)
Anyway, back on the subject of Bryant.  He was someone who I initially created a test tree for on Ancestry.com. I create test trees for individuals who I'm not quite sure if or how they fit into my my main tree.  Bryant Henry Kerr Sr. I couldn't find any trace of in records other than this name mentioned in the U.S. Social Security Applications Index for for his son Bryant Henry Kerr Jr. 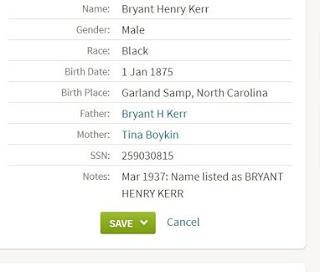 
Junior's mother,Tina Boykin, married a man named Henry Faircloth by 1880. She was living with him in Clinton, Sampson County, NC. With this bit of information in mind, I believe Bryant Henry Kerr Sr. more than likely died sometime between 1875 and 1880.

Bryant Henry Kerr Jr. was married at least twice but perhaps as many as three times. Here on the 1910 Federal Census, it shows Bryant with his wife Ida and it is listed that this was a second marriage for both parties. They had been married approximately 9 years. This would indicate perhaps Bryant had a short lived marriage between 1900 and 1901. Perhaps a wife died in child birth?

By 1930, Bryant had another wife--a Lillie Mae Peterkin. From looking at the census. Bryant had at least 10 children between his two wives Ida and Lillie.

It appears that things didn't work out between Bryant Henry Kerr Jr and Lillie because by 1940 she was married to someone else and living in Pahokee, Palm Beach, Fl. Bryant remained in Ocilla, GA living with his son George and his family.

Now I am going to turn the focus toward one of the children that Bryant Henry Kerr Jr. had with Lillie Mae Peterkin. Ulysses Kerr was born to Bryant and Lillie on November 29, 1921 in Ocilla, GA.
After his parents parted ways he resided with his mother in Pahokee, Fl. He enlisted in the army as a young man. He married an Ida Mae Richardson on November 14, 1947 in West Palm Beach. I also learned he became a police officer for the Pahokee Police Department. Ulysses Kerr died Oct 2, 2002 in Belle Glade Fl.  While researching him, I was lucky enough to find a picture.

Now when I saw Ulysses's picture for the first time, there was something about it that seemed oddly familiar. I finally figured it out when I looked at my father's army photos. 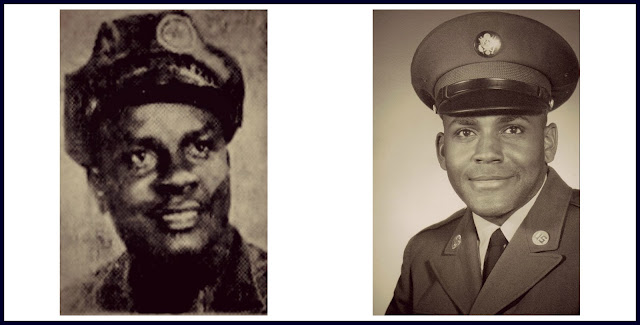 So far, I've come across 2 DNA cousin connections on Ancestry.com linked to to this particular branch of the Kerr family line. Who knows what connections I'll make in 2018? 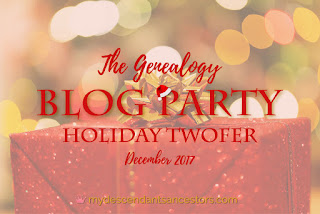