January 06, 2012
Ah-Ha. Just got off the phone with dad for clarification of the story of my grandfather's journey from Venezuela to the U. S. When my grandfather and a buddy of his arrived at the port to leave he initially wanted to go to Canada. There wasn't going to be another ship headed to Canada for another two weeks. The boat for the U. S. was due to leave and so that is the one he boarded. He had had enough of Venezuela and just wanted to get out. I have some more research to do about the history of the oil industry in Venezuela now. Just what I need, more research to do. LOL!  Just kidding. That's what I live for.

Anyway Grandpa arrived in the U.S  on September 29, 1927. I could not find him listed on the 1930 census anywhere but I do have that wallet that I posted a picture of in My Paternal Grandfather, Harold Murrell--Part one. In that wallet there was an address listed  2394 7th Ave, NY, NY.  I compared this to the address I found on the 1930 census for my grandmother. At that time she lived with her mother Ella, two sisters Edna and Hilda,  and a cousin. The address for her was 274 West 128th St. NY, NY. 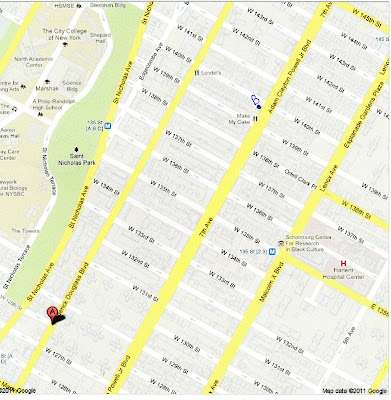 Image courtesy of Google Maps
Address locations for Ethel Smith and Harold Murrell
in 1930
Ethel was located at Point A and Harold at Point B.

My grandparents met at the place they both worked, the Morgan Laundry. They were married in 1932 and later moved and settled in the Bronx. They lived at 970 Tinton Ave as evidenced by my grandfather's naturalization petition. 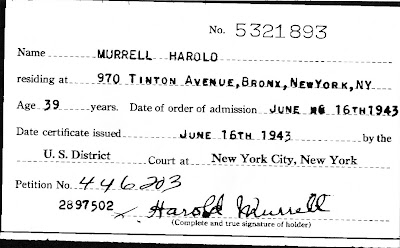 I knew my grandpa as granddaddy. That is what I called him when I was a little girl. It was not until I was grown that I saw images of my grandpa in his youth. I knew he was young at some point of course but my mental image of him was of a retired man, who loved his soap operas and his afternoon nap. He loved to walk his dog, Shane and I would tag alongside him. He enjoyed a good cup of hot tea with lemon and a slice of Sara Lee pound cake. He loved to read his paper and do "The Jumble" word puzzle. He would put up with me telling him the story of the three bears over and over again, usually during the time he was trying to nap. He would tell me stories. I especially loved the one where he would tell me how he lost all his hair. According to him, he was walking down the street one day with the dog and a huge wind came along and blew all his hair away. After I heard this story for the first time I kind of got nervous about my own hair when a windy day would come along. Now you may ask what is the point of this long ramble? Well, the point is that it was a bit of a shock to me to see images of this man in his youth. I mean I know this now but when you are a child you don't really have a sense that someone has lived a whole lifetime of life before they get to be a grandparent.  I am impressed to see the man was confident and knew who he was. I mean look at this picture. 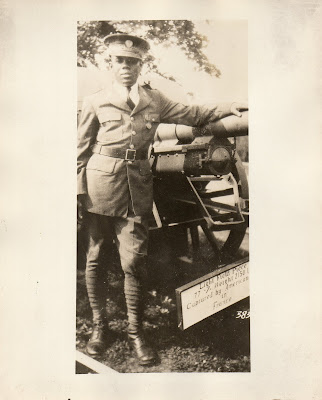 He knows he looks good. LOL!
I love it.