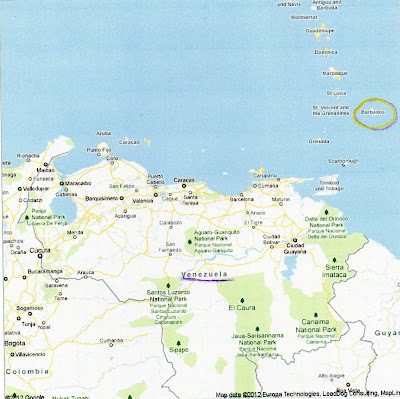 My grandfather was a carpenter and was able to put his skills to use in the oil fields of Venezuela. He spent a year somewhere I believe near Lake Maracaibo, Venezuela. This is an area that is known for oil. He learned how to speak Spanish which I didn't learn about until I was all grown up. My brother told me that my grandfather sometimes helped my brother with his Spanish homework when he was in high school. The thing that blows my mind is that my grandfather helped to build oil derricks.  This was back in the day when they were made out of wood. You know like in the movie "There Will Be Blood" with Daniel Day Lewis.

Image from the movie "There Will Be Blood" shot by Robert Elswit.

From what my father told me,  he described conditions as being very primitive at the camp where my grandfather stayed and worked. His accommodations were a hut with a dirt floor, four hammocks and that was about it. Whenever it rained the mud was just terrible. The work was already dangerous and then throw snakes and insects into the mix...and I just don't know how my grandpa did it. God bless him. The reason why I am under the belief that he was probably somewhere around the Lake Maracaibo region is from what I found on the New York Passenger Lists, 1820--1957. The name of the boat he was on was called The Maracaibo and it reads that it's point of origin was from Maracaibo, Venezuela. Now that I look at this information again, I realize that he may have actually been on the island of Curacao.  There's a spot on the passenger manifest that says the last permanent residence listed for my grandfather was D.W.I. Curacao. Perhaps he was there in transit from Maracaibo. I have to talk to my dad again because I remember now somewhere along in the story that my grandfather was held up on an island somewhere and the ship that he was supposed to originally board was going to go to Canada, but something happened to that ship and he had to wait for the next one.  Another boat was headed for Canada in a couple of days, however, there was one headed for America that was going to leave sooner and so that was the one he boarded.