A Little Help From Mary Smith.

June 12, 2012
If you missed my post from yesterday, you may want to check it out first before reading this one. Here's the link Amanuensis Monday: More From Samuel Whitney's Estate Record

So we have just discovered that Samuel Whitney, my probable 4th great grandfather, had an illegitimate daughter named Mary Smith that he recognized as his heir. When I saw her name was Mary Smith, I said to myself, "Mary Smith.  Why did her name have to be  Mary Smith?" I said it and felt it in the same way that Harrison Ford describes how he doesn't like snakes in the movie "Raiders of the Lost Ark." I have nothing against Mary personally. Shucks I don't really know her. It's just that Mary Smith has to be one of the most common names of all time! LOL. Oh well. Something happened yesterday though that makes me think that Mary herself may have given me a little nudge to figure things out.

While I was writing, I had a few different tabs open on the computer so I could flip back and forth between reviewing the text of the estate record, writing my blog, and checking my email. Anyway, while doing this Google Chrome crashed so I had to bring everything back up again. When I went to go back to FamilySearch.org to bring back up Sam Whitney's estate record, I was in a bit of hurry. In the past, I would simply type in his name and then type in Craven County in the appropriate fields and hit enter. This time I hit the enter button after just writing his name so it brought up tons of entries for all things related to Sam Whitney. To get to where I needed to go, after this I clicked on the area where you can filter down your results. I clicked on collections and then probate and court, to get back to the estate record. Well, when I did this this time, an interesting thing came up. 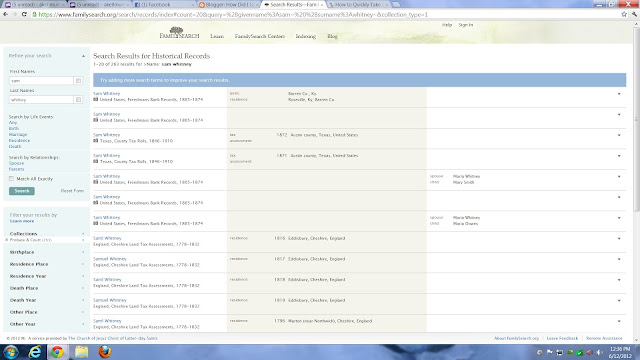 I noticed that a result came up for a Mary Smith in the Freedman's Bank Records where the father was listed as Sam Whitney. 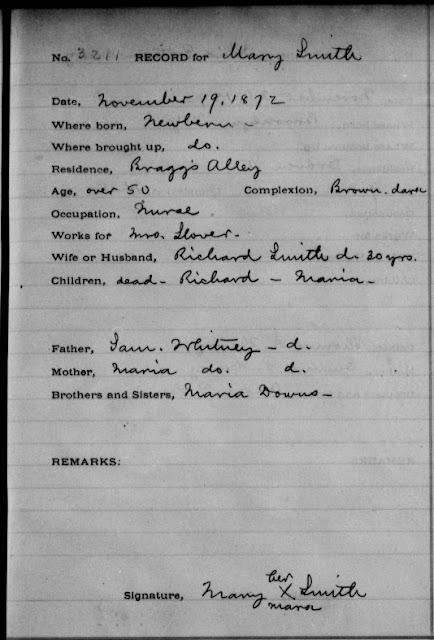 So it looks like I have some new leads to investigate. Thanks Mary!