June 18, 2012
Isn't it always the case in genealogy that once something is revealed there's more questions that need to be answered. Well without further ado, here's a screen shot of my AncestryDNA results. 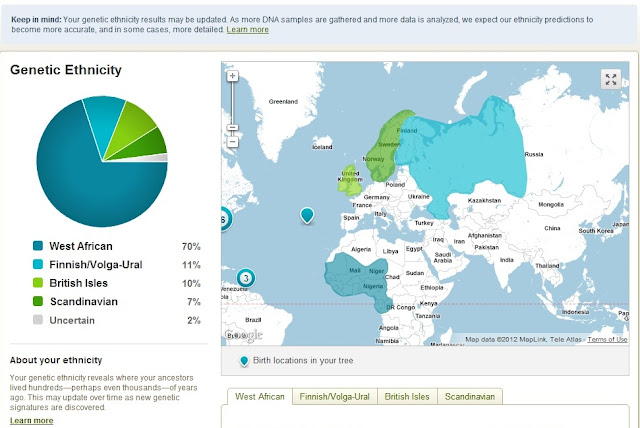 Screenshot of my DNA results page on Ancestry.com

Hmmm. Now the 70% West African matches up perfectly with the result from my first admixture test through AfricanAncestry. If you missed the results from that test from earlier in the year, here's the link to that post My DNA Admixture Results Are In!  In my head I already had it figured that most of my European ancestry if not all was going to be from England and Ireland. My paternal grandfather was from Barbados so I thought immediately, west African and English. My mother's people I thought had possible Irish ancestry due to the white families that they were associated with during slavery. My DNA from the British Isles came out to be 10%. Okay, I thought that would be higher...moving on.

According to the oral history I had been given regarding my Whitney family line, I thought there should be a splash of Portuguese up in here. Nope! No Portuguese for you! (A la the Soup Nazi on Seinfeld if you don't know what I'm referring to,YouTube it.) No Native American Ancestry again, although 2% of my DNA did come back uncertain (It's a stretch, I know but there's still a shot. LOL! I have to laugh at myself for not letting this go.)

Then there's that little matter of the 11% Finnish/Volga Ural and 7% Scandinavian.

I had to read through the rest of the information provided on my DNA results page to find out that Finnish/Volga-Ural refers to the areas of modern day Finland and Western Russia.
Scandinavian for Ancestry.com's DNA results refers to modern day Norway, Denmark, and Sweden.

Alrighty then. I guess I have some more research to do. LOL!
DNA