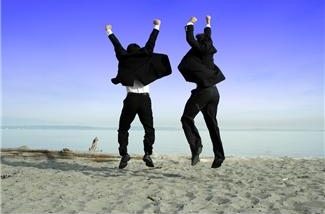 Now the first thing your probably thinking as you read this is, "Where did they make it to?" Next question would be, "Who is we?"  I'll answer the second question first. The "we" would be my husband, our two kids and I.  The answer to the other question, I will get to a bit later.

Well it turns out that my husband was able to take some time off from work, so we have taken a break to somewhere sunny and relaxing. I found the above featured picture online and I think it perfectly describes the joy my husband and I felt upon arriving to our destination. You see, the last time the family and I were on vacation it didn't go so smoothly. That fiasco started off with us getting up at 3:37 AM, which my son still remembers the precise time to this day. Ha! I guess that made an impression on him. Our early morning flight was initially delayed and then eventually cancelled due to mechanical issues. The airline then drove us from Binghamton to Scranton's airport to catch an afternoon flight which...that's right you guessed it was delayed. It was just one delay after another. Our poor children had been through so much and were exhausted. Oh yeah did I mention that this was their first time flying. (smile) As we came in for the landing on our last flight, both of them threw up.  So there we were at 11:45pm in an airport restroom trying to clean up the remnants of yack off of two bleary eyed kids. We then stumbled to our rent a car and prayed to Jesus that we had correct directions. The end result was us arriving to our destination at 1:30AM.

No delays for us this time! So that's why I chose this picture of two people jumping for joy at the beach to illustrate how we felt on our arrival. Now mind you if I could have found a picture of a handsome, older white gentleman and a beautiful black woman with braids in her hair jumping for joy to represent my husband and I then I would have used that instead. So please excuse the fact that these are two men in suits. Not that I have anything against two men in suits. I think they are rather handsome men in suits, at least from what I can tell of them. In fact I think men should jump for joy in business suits on the beach a lot more often....huh, what? Oh, I kind of got off track there for a minute. Anyway, wonder no further about where we are because we are staying in lovely Siesta Key, Florida. It was a little cool here today so we weren't able to spend much time on the beach but I think the rest of the week it is supposed to be a bit warmer. Here's hoping.