What Did Mortimer Mitchell See?

July 04, 2014
So after having a lovely beach day with the family, I decided to be random and just start doing some searches through some old newspapers from New Bern, NC. My 3rd great grandfather Mortimer Mitchell popped into my head and so I entered the simplest search criteria of his name and North Carolina and I came across some interesting information. This information adds another layer to the story of how Mortimer Mitchell came by his land.

Let me set this up. Back in December 2011, I wrote a post called A Tragedy For One...Leads To An Opportunity For Another. That blog post gave some background on the sad circumstances surrounding the land Mortimer Mitchell eventually purchased from a woman named Elizabeth Williams in Riverdale, NC. In that post, I shared portions of an article I had found on-line that was transcribed by a Gloria Smith Taylor. The article was from the newspaper New Bern Weekly Journal Commerce dated December 18, 1866. Well I believe I came across the entire article but I believe it was from the December 25th, 1866 issue. 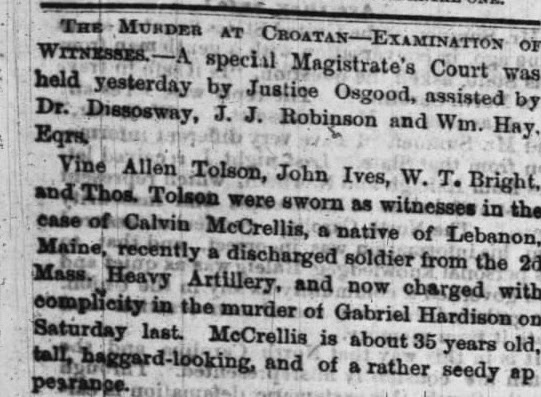 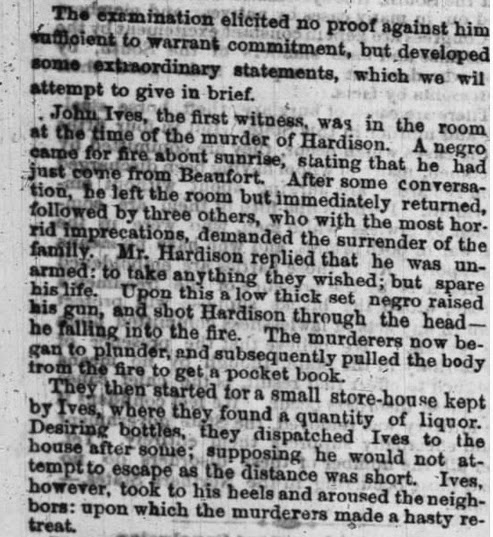 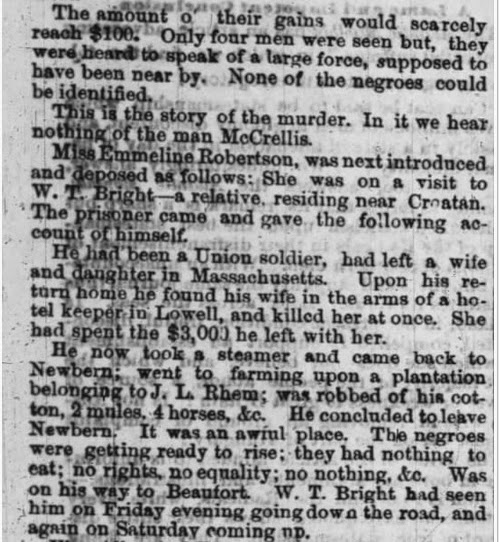 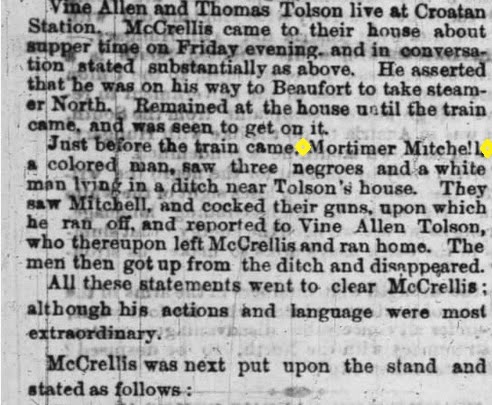 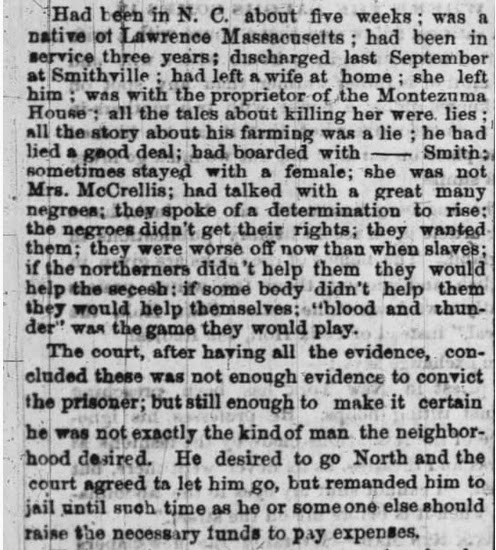 Just before the train came Mortimer Mitchell, a colored man, saw three negroes and a white man lying in a ditch near Tolson's house. They saw Mitchell and they cocked their guns, upon which he ran off, and reported to Vine Allen Tolson , who thereupon left McCrellis and ran home. The men then got up from the ditch and disappeared.

Elizabeth Hardison Williams who sold the land to my 3rd great grandfather was born Elizabeth Tolson. I have done some cursory research on the Tolsons and it appears that she was the niece of Vine Allen Tolson. I still have to follow up on this. I am waiting for a book called The Heritage of Craven County, North Carolina  to arrive in the mail to confirm the relationship. Anyway, it looks like Mortimer knew something was up and did the right thing and notified his neighbor.

This reminded me that Mortimer Mitchell was a part of this Riverdale community and not just some ancestor floating around in isolation. Take a look at this page from the 1870 Federal Census which shows the household for Mortimer Mitchell. 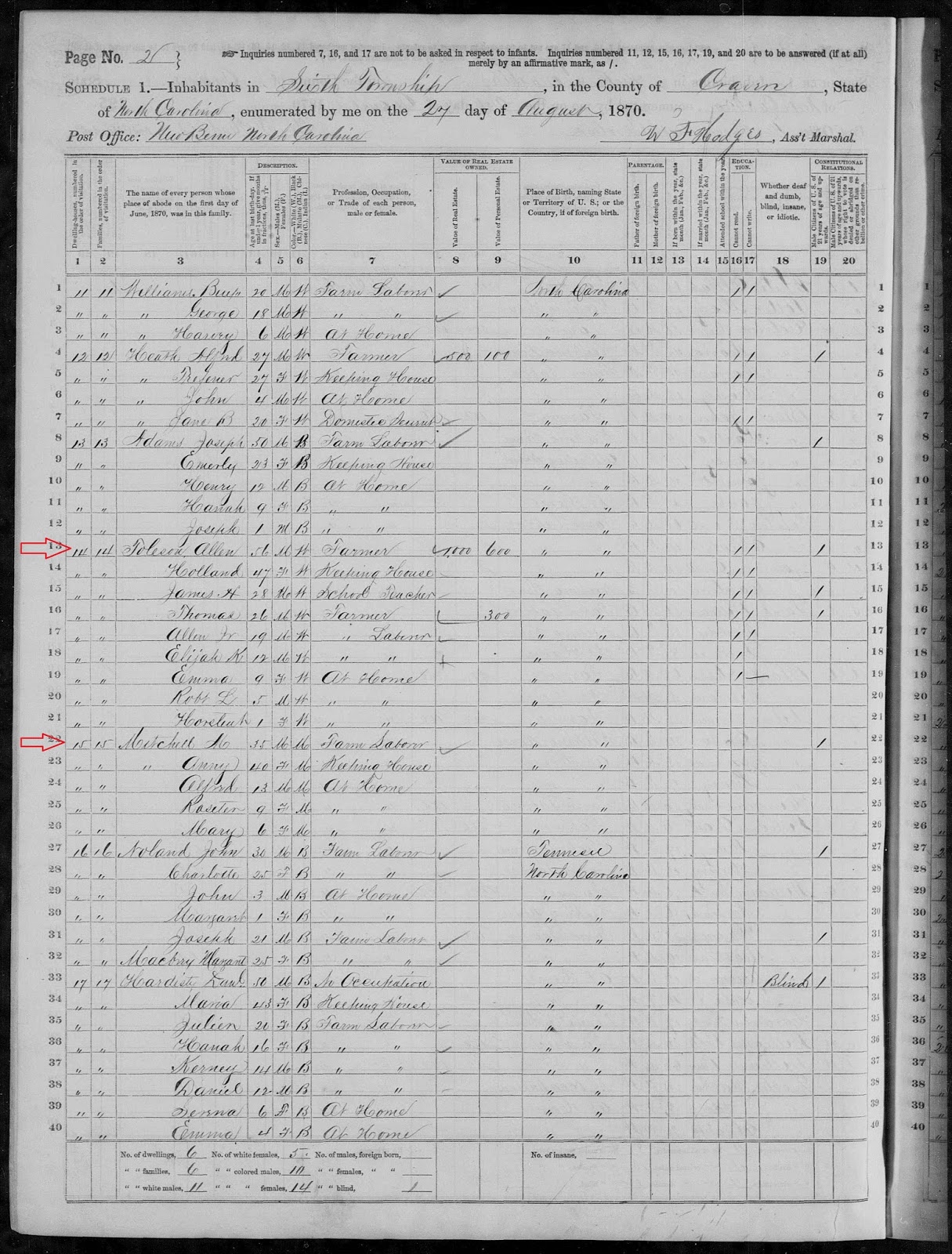 Vine Allen Tolson who Mortimer ran to notify about the men lying in the ditch near the Tolson property, was listed living on land next to where the Mitchells resided in 1870 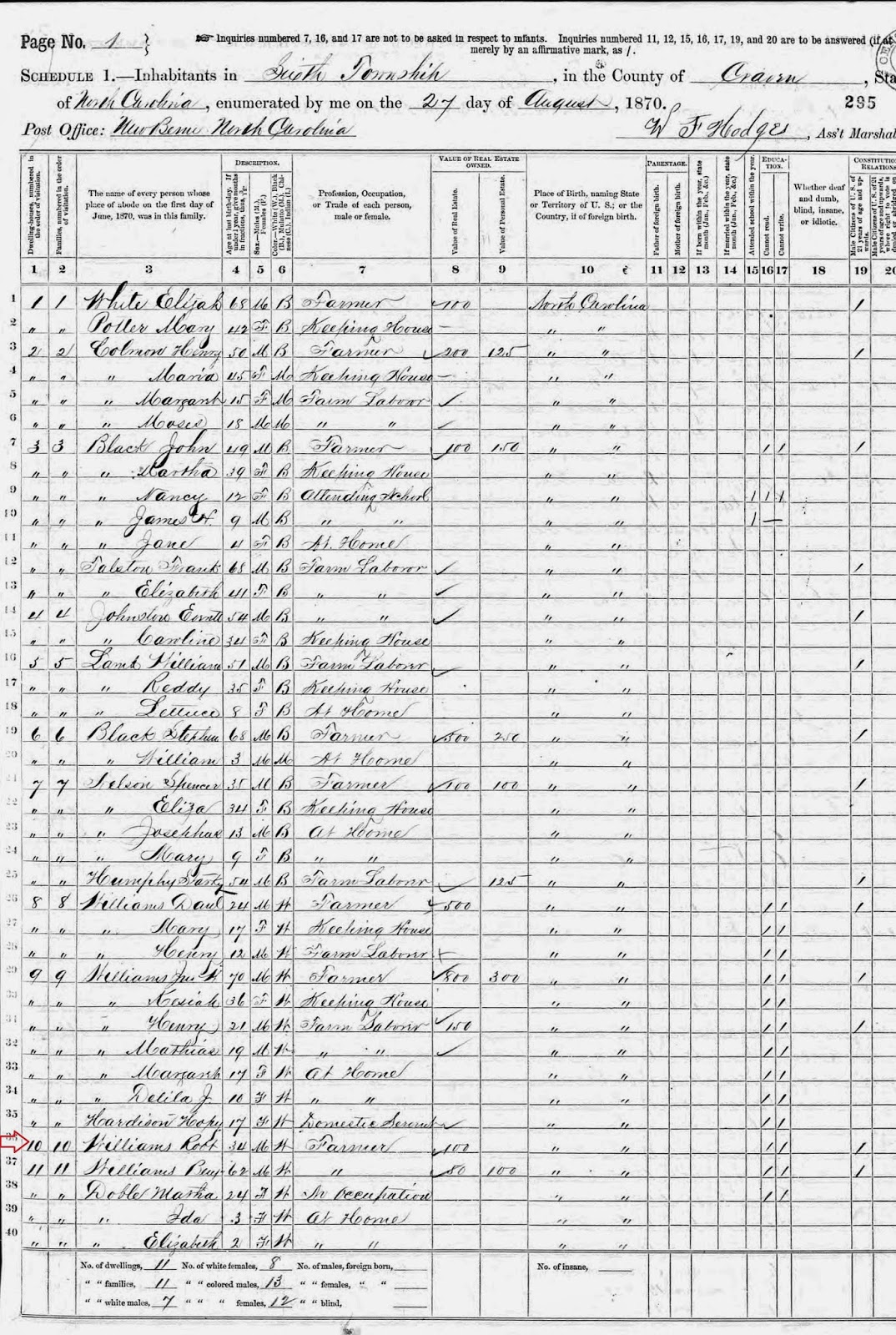 This is the page prior to the last census page. On it I have placed an arrow marking where Robert Williams was enumerated. He would go on to marry Elizabeth Tolson Hardison less than two years later on February 15, 1872.

Now when I look at my 3rd great grandfather's deed things are so much clearer on how and why Mortimer came by this land and how he was connected to this community. 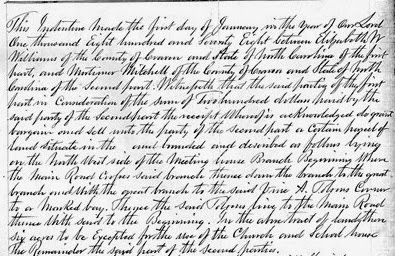 This Indenture made the first day of January in the year of our Lord One thousand Eight hundred and Seventy Eight between Elizabeth W Williams of the County of Craven and state of North Carolina of the first part, and Mortimer Mitchell of the County Craven and State of North Carolina of the Second part. Witneseth that the said parties of the first part in Consideration of the sum of two hundred dollars paid by the said party of the Second part the receipt Whereof is acknowledged do grant bargain and sell unto the party of the second part a certain parcel of land situate in the and bounded and described as follows lying on the North West side of the Meeting house Branch Beginning Where the Main Road (crosses) said branch thence down the branch to the great branch and With the great branch to the said Vine A Tolsons Corner to a marked bay. Thence the said Tolsons live to the Main Road thence with said to the Beginning. In the above tract of land those six acres to be Excepted for the use of the Church and School house the Remainder the said part of the second parties.