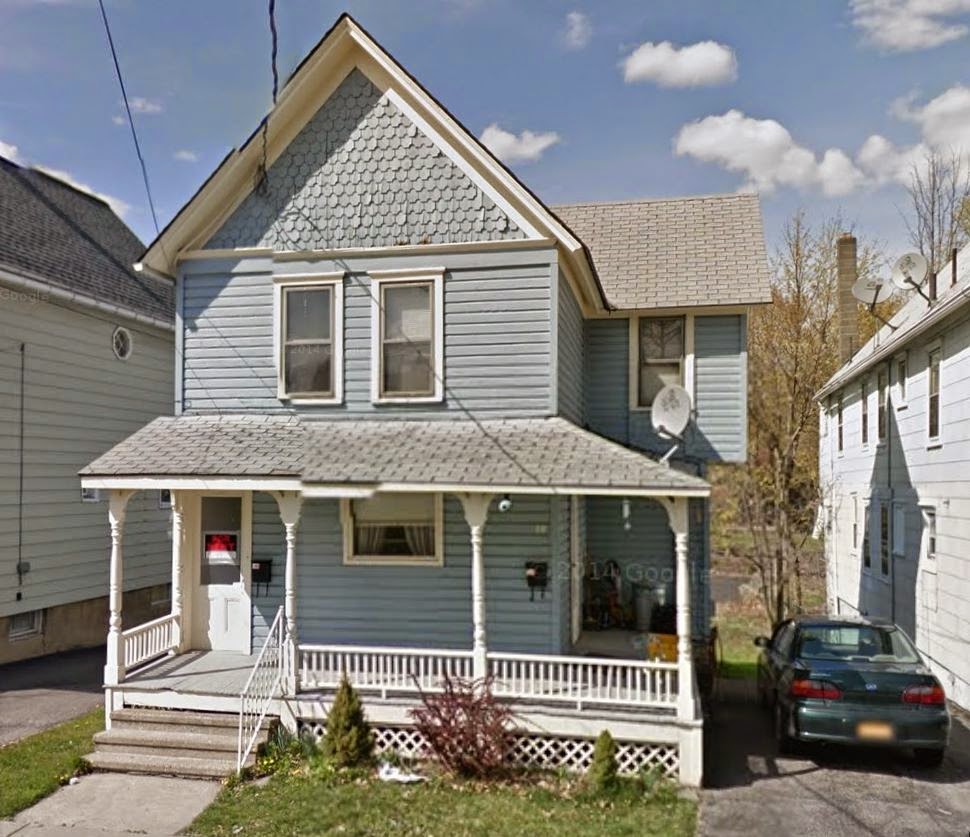 If you are not familiar with this wonderful project that was created by Julie Goucher of the Angler's Rest blog, please refer to this link: http://www.anglers-rest.net/book-of-me-written-by-you.html.

This week's prompt is - Your First Home

This can be either or a combination of any of the following
Your parent's home - the first home you can probably remember
A home away from home - perhaps collage
Your first big purchase
The first home with the love of your life and perhaps your descendants
Perhaps talk of the excitement, stress and emotional attachments to locations
Was your home in your family for lots of years, was it an old house or a new build?
Can you visualise the rooms, or have photos?

I've decided for this prompt to write about my first home that I lived in on my own. No roommates just me. The place was special to me because it was the first time I could take charge and make all the decorating decisions myself.  For my first two apartments after college, I had roommates. Two in the first and one in the second. Our bedroom furniture would be our own but for the rest of the apartments we just kind a pooled together furnishings.  This time around my place would have a singular vision and I enjoyed making it it my own.

If I remember correctly I moved to 20 College St. in August 1996 and lived there for approximately one year. The apartment I rented was on the 2nd floor. The entrance to the apartment is the door with the "For Rent" sign on it in the picture shown above. There were two apartments in the house. The first floor unit I think had two bedrooms in it. Mine was a one bedroom with a small eat in kitchen and a single bath. It was the perfect size for a single girl. Well, I wasn't exactly single. I was dating my husband who was my boyfriend at that time.

I was working in retail so I didn't have a ton of money then. I still wanted to make the place look special. I went to second hand furniture stores and found some good deals. My kitchen set was a table and two chairs, vintage from the late 50's or early 60's. It was in fantastic shape. I think I purchased it for $45 if I remember correctly. It fit perfectly in the kitchen area which was very narrow. I remember hanging blinds in that apartment without a power drill. I spent so much time slowly hand twisting those screws with a Phillips head screwdriver into the walls. Never again. I keep tools now in my house. I understand their importance.

My splurge for that place was that I bought three pieces from Pier 1 Imports, a wicker couch, a coffee table and a side table. These were all for the living room area. I wish I had a picture of that place. Perhaps there is one in my mother's collection. I will have to check in with her to see. My accent colors were pink and green and were to tie into a romantic poster I had purchased to be the focal point of the room. I don't have that poster anymore, but here's what it looked like. 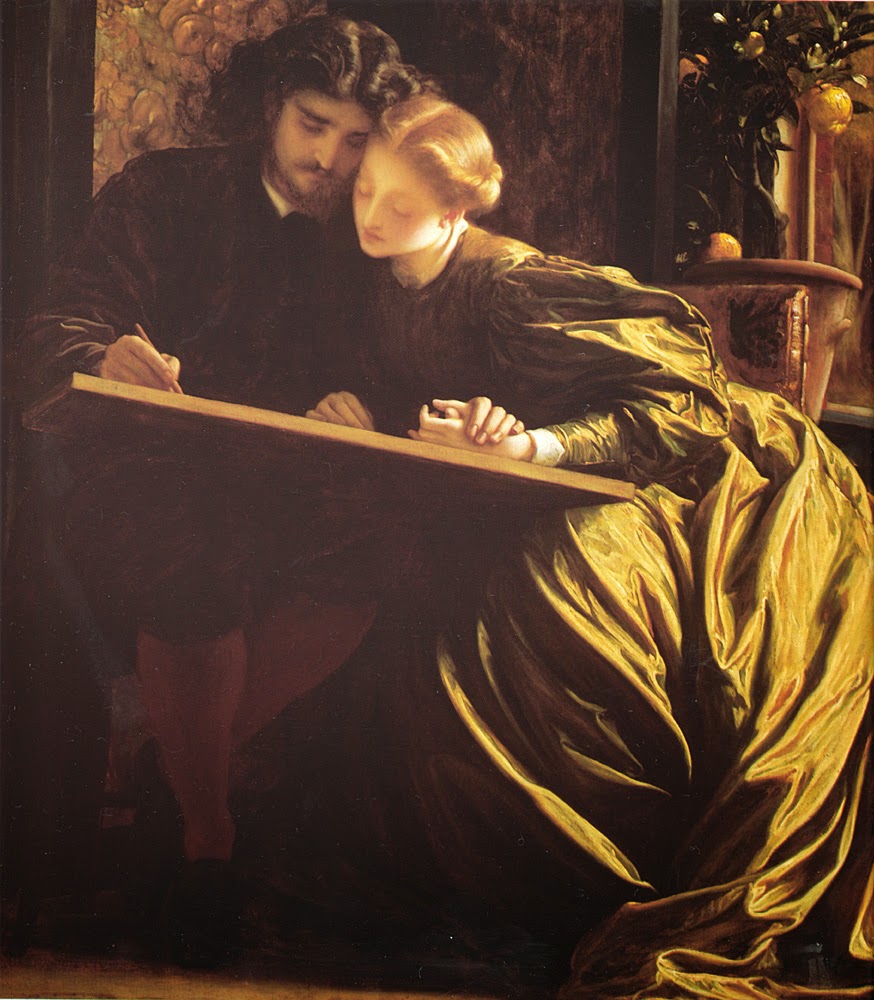 Oh yes, I was definitely in love at the time. (smile) Oh and now I remember I had another framed poster in my bedroom that was another one of Leighton's works. 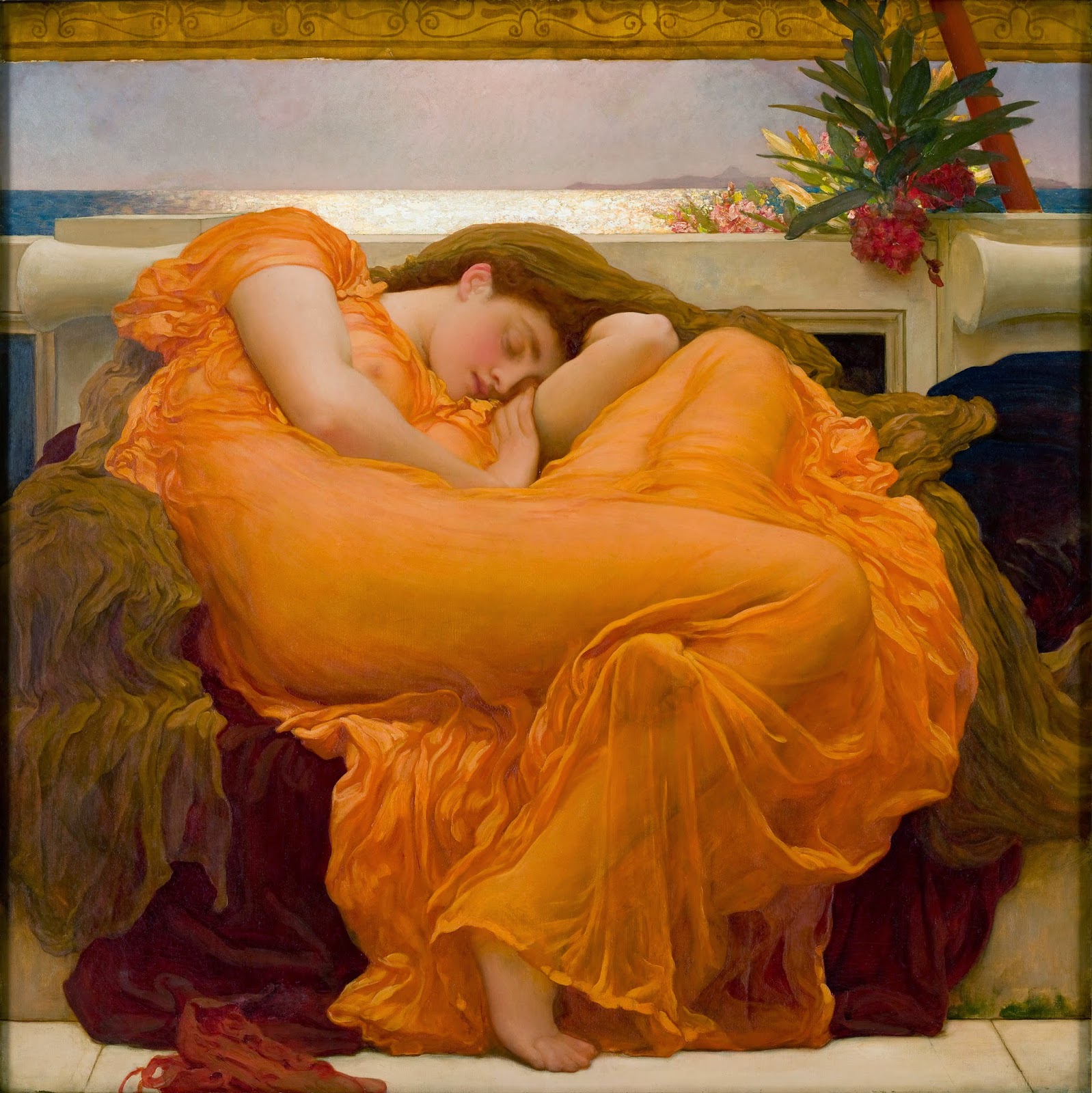 Let's go back to the living area now. I had "The Painter's Honeymoon" poster centered above the the wicker couch. The side table was on the left with a lamp that I had purchased "As Is" (had a tiny rip in shade) from the Bombay Company. I worked for the Bombay Company for a couple of years and during that time I had purchased little accessories that I finally had the opportunity to display. I had a glass floor vase with a spray of flowers that was tucked behind the couch. There was a green marble top plant stand that I put an African vase that my then boyfriend/now husband Tom had given me I think as a birthday gift. For extra seating, I had a small futon that I purchased at a garage sale. It just needed a new black futon cover and Voila! It tied into everything perfectly. There was a mid century modern chair that I fell in love with that I bought at a local store called America's Attic. I still have it but it's buried in my basement under some stuff. I am going to take a moment and see if it is reachable and if it is I'm going to take a picture.

After a bit of digging, here it is. 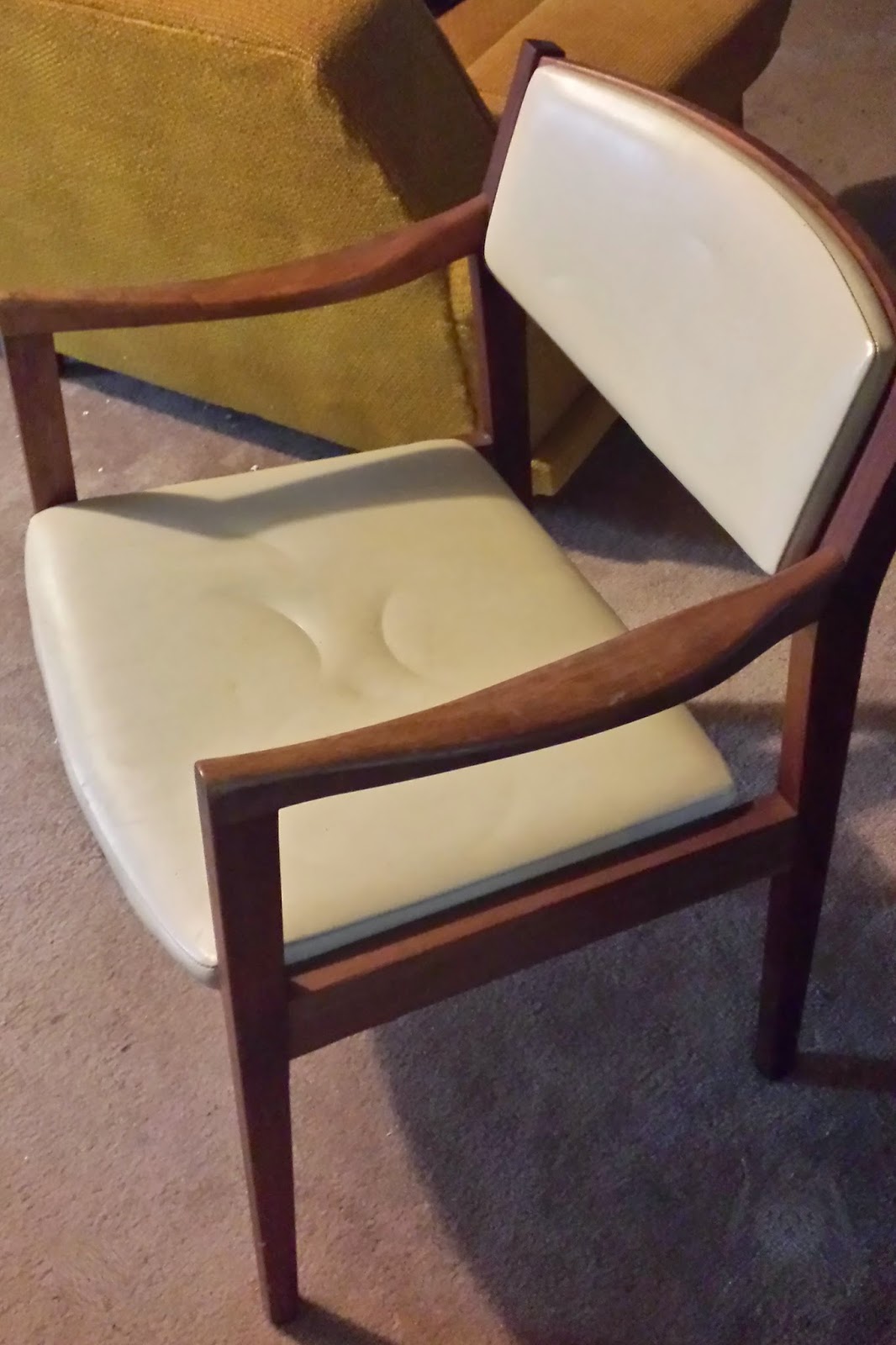 Unfortunately, we had a couple of desk lamps sitting on the cushion that left impressions in the seat but other than that it still is in pretty good shape. I don't know why I still have it. Maybe I'm just not ready to let it go yet.

On another wall in the living area I had a bookcase and above it I had hanging this charcoal drawing I purchased at auction for $35. 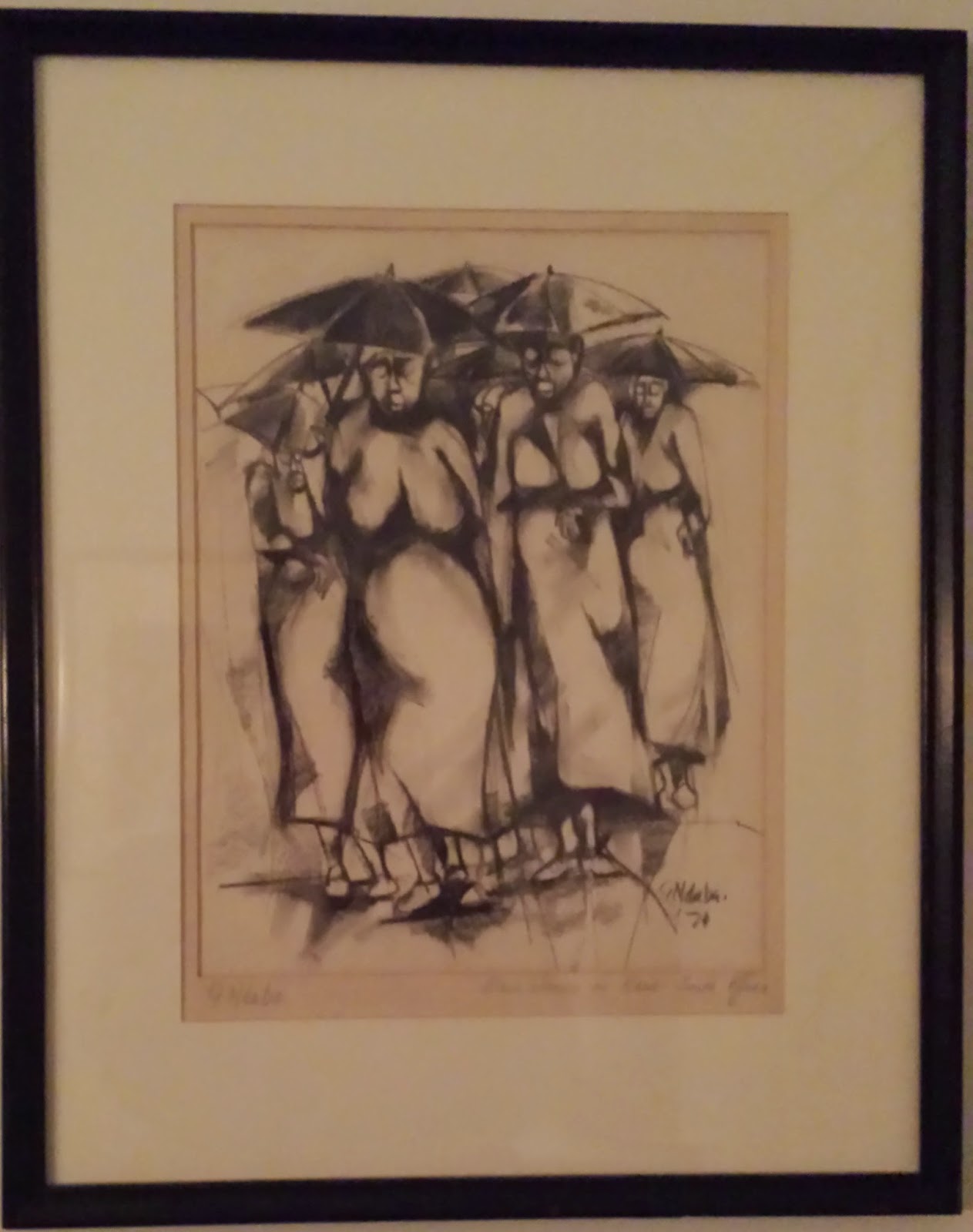 Still have this one. It hangs in our dining room now. On another wall I had a tiny TV, which I could watch the 3 local channels I could get reception for. I didn't have cable. Didn't have the money for it and I wasn't home enough for it to really matter. The TV rested on one of three white closet stackers I had standing side by side. Those worked perfectly as a TV stand and display case for knickknacks. Oh and I can't forget my snake Ernie. Yes I used to have pet corn snakes.  You can read more about that in my post, Something About Me Saturday: Psst...I Have A Secret. Ernie's tank I had sitting on 4 black crates that were off toward the other side of my living room couch.

My bedroom was pretty straightforward. I had my bed, night stand and dresser. I spent more time in the living area and kitchen so the furnishings in bedroom weren't as important to me. I had a pretty impressionist poster hanging on the wall next to the room's only window. The poster was a view out an open window looking at a lush green tree outside. I wish I remembered who the artist was on that one. I would find myself daydreaming on many occasion when I stared at that picture.

Oh yeah, I almost forgot another cool thing about the apartment. Now remember I was on the second floor so this was kind of interesting. In the kitchen there was a door to nowhere. Well not exactly it opened to the outside but the only thing on the other side was the roof to the first floor apartment. Not a flat roof either but I remember the landlord saying that previous tenants would sometimes lay out on a nice day to catch some rays on that roof. For me it wasn't my thing to go lay out on the roof of someone's house but to each his own right?! I did enjoy opening the inner door and leaving the screen door closed to get some extra fresh air in the space.
The Book Of Me