Murchison Kerr Is Back From The Dead! 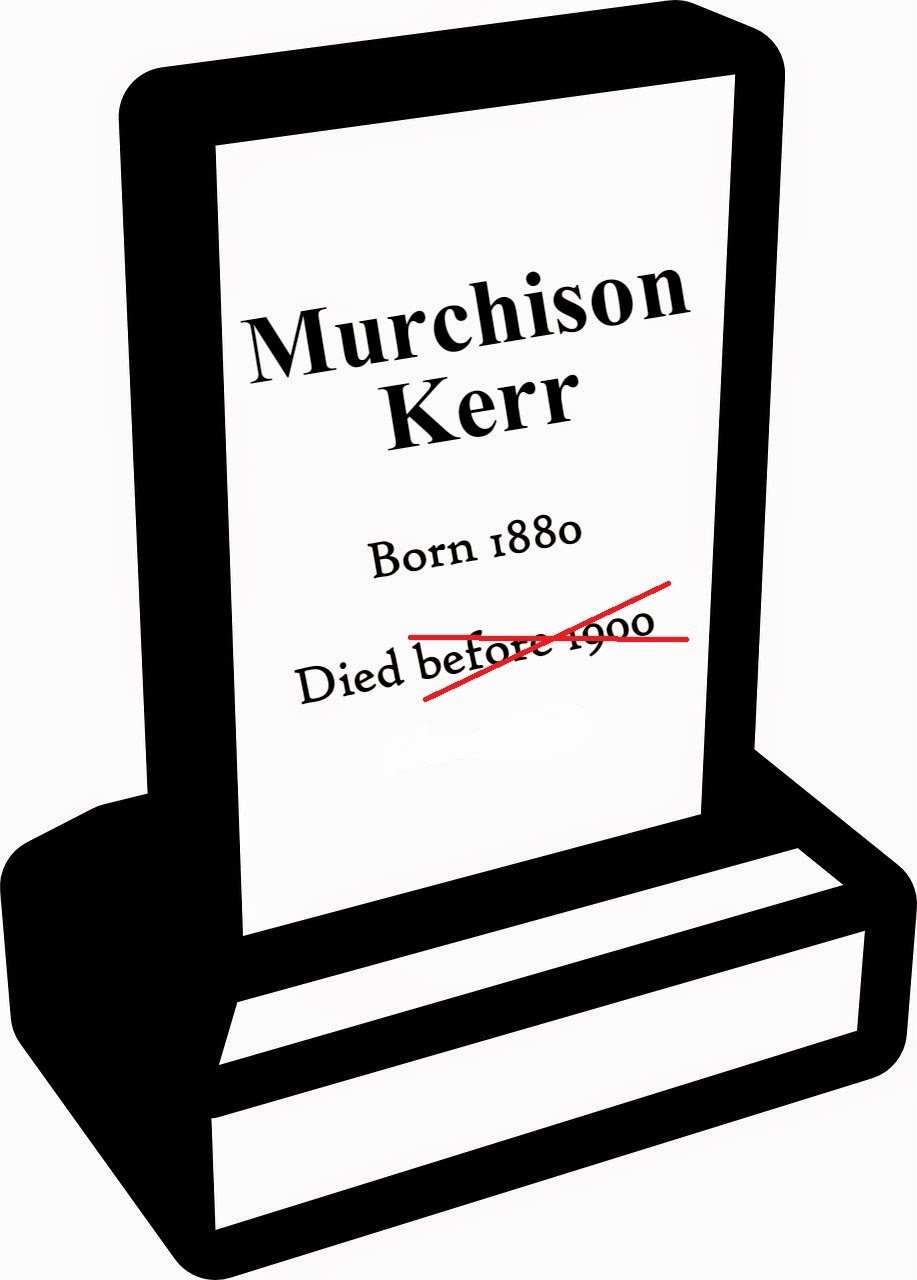 Okay, well he's not exactly back from the dead. He's still dead. He just died later than I initially thought. I had an "oops my bad moment" and now I would like to set the record straight.

I am still digging into my Kerr family line from Sampson County, NC. I am telling you this branch of the family tree is turning out to be quite interesting. One thing I have learned from all of this is that when you can't find your ancestor in the census or city directories, don't forget to check land records. This can be especially helpful for finding people born between 1880 and 1900. (Darn that 1890 census fire! Argghhh!)

Murchison Kerr was my great grand uncle. He was born most likely some time in January 1880 to my 2nd great grandparents, Henry and Tina Murphy Kerr  and was a brother to my great grandmother Ella Kerr Smith Dixon, all of whom I have written about before on this blog.

Now up until the other day the only record I was able to find on Murchison Kerr was on the 1880 Federal Census.

I checked the 1900 census on forward and there was no sign of Murchison anywhere. I thought he more than likely died sometime before 1900.

If you recall in my post  I Had An "I'm A Dummy Moment", I realized that there were quite a few more index pages showing deeds for my Kerr ancestors on the Sampson County Register Of Deeds website. I've been slowly reviewing through each deed and What do you know? 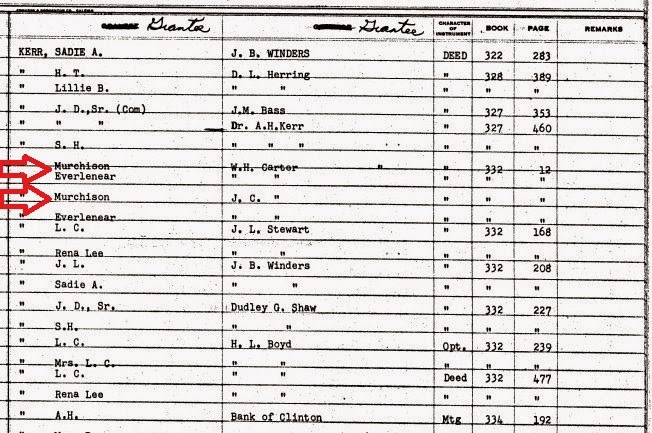 It appears that Murchison was alive and well at least through July 1919.

Here's a deed that can be found by going to the Sampson County Register of Deeds Online Access Site. 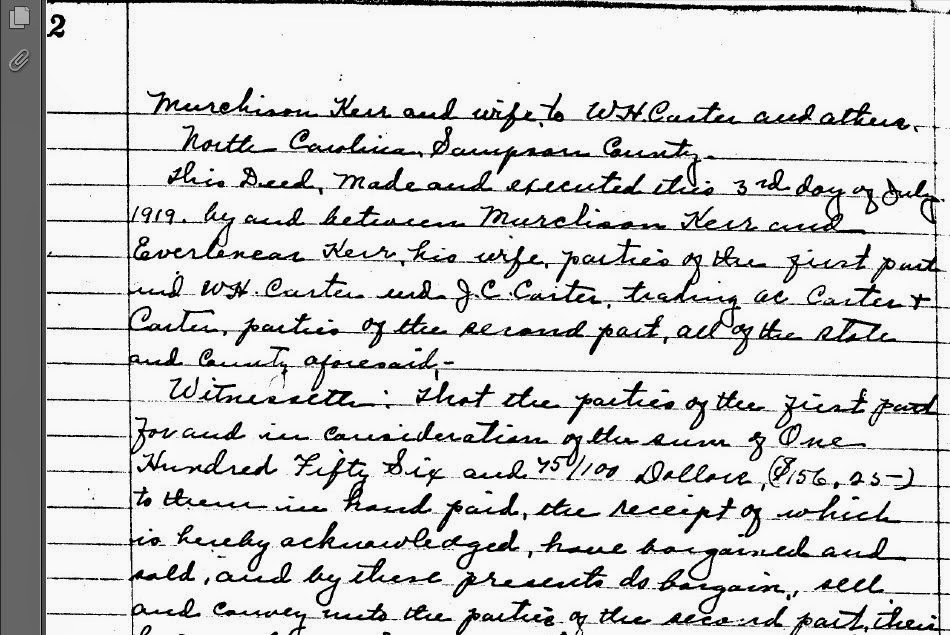 Murchison Kerr and wife to W. H. Carter and others
North Carolina, Sampson County.
This Deed, Made and executed this 3rd day of July 1919 by and between Murchison Kerr and Everlenear Kerr, his wife, parties of the first part and W. H. Carter and J. C. Carter trading as Carter & Carter, parties of the second part, all of the state and county aforesaid.
Witnesseth:  That the parties of the first part for and in consideration of the sum of One Hundred Fifty Six and 75/100 Dollars, ($156.25) to there in hand paid, the receipt of which is hereby acknowledged, have bargained and sold, and by these presents do bargain, sell, and convey unto the parties of the second part their 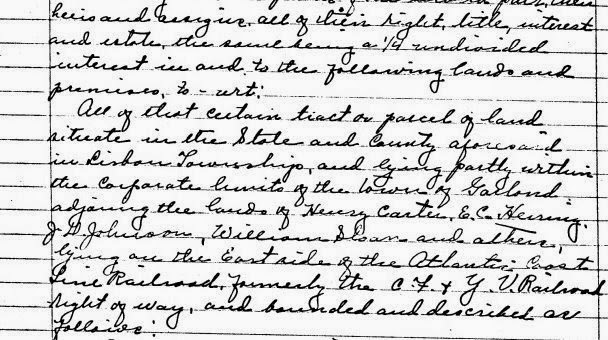 heirs and assigns all of their right title interest and estate, the same being a 1/4 undivided interest in and to the following lands and premises to art:
All of that certain tract or parcel of land situate in the State and County aforesaid in Lisbon Township and lying partly within the corporate limits of the town of Garland adjoining the lands of Henry Carter, E. C. Herring, J. D. Johnson, William Sloan and others lying on the East side of the Atlantic Coast Line Railroad, formerly the C. F. & Y. V. Railroad right of way and bounded and described as follows: 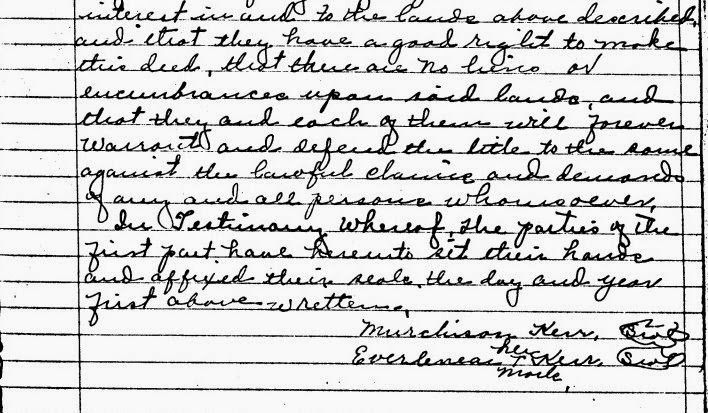 interest in and to the lands above described and that they have a good right to make this deed, that there are no liens or encumbrances upon said lands and that they and each of them will forever warrant and defend the title to the same against the lawful claims and demands of any and all persons whomsoever.
In Testimony whereof the parties of the first part have hereunto set their hands and affixed their seals the day and year first above written.
Murchison Kerr {Seal}
her
Everlenear x Kerr{Seal}
mark 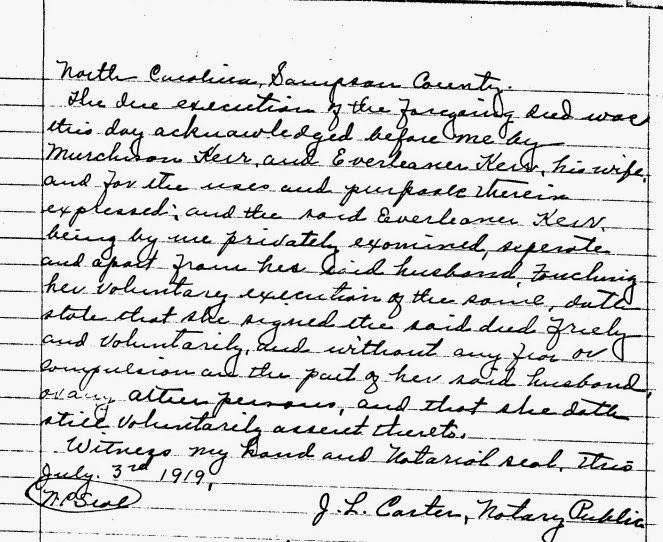 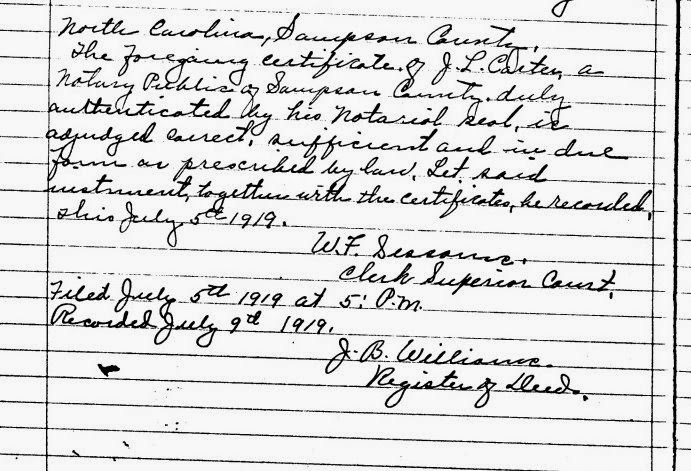 I don't know exactly when Murchison Kerr died yet but when I find out I will provide an update.