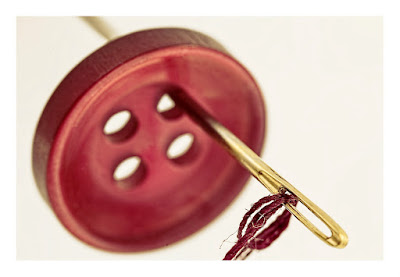 In the beginning of July, I wrote about my step great grandmother Sylvia Sheppard Bryant. Her early years were not easy ones due to her mother's suicide. If you missed those posts, here are the links:

Sylvia Sheppard Bryant's Story --Part two: A Father Did The Best He Could.

Thankfully there were two sisters who took in and cared for young Sylvia Sheppard.  I featured in part three of my series on Sylvia a news article regarding Mrs. Ethel Riddick French. The other lady who helped my step great grandmother was Mrs. Fletcher Riddick White. 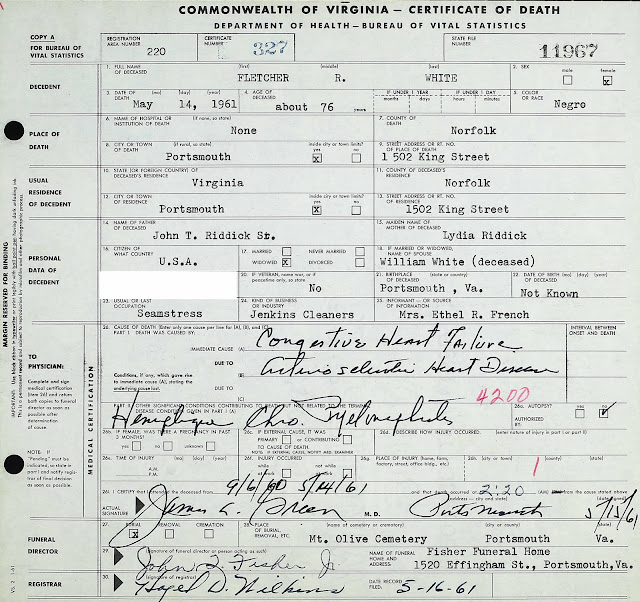 Fletcher's death certificate shows that she was about 76 years old at the time of her death. That would make her birth year approximately 1885. Based on the information found on the 1900 Federal Census, it was something closer to November 1877.

In any event, Fletcher Riddick worked as a "coypyist in an office" that year. She would spend a few years teaching prior to her marrying a William White of Portsmouth, VA.  She was a teacher just like her sister Ethel French. I guess we know for sure where my step great grandmother Sylvia got her inspiration to become a teacher from.

By 1930, Fletcher had changed occupations once more and was shown to be working as a seamstress according to the census for that year. She would continue on in this occupation for the rest of her life.

For the life of me, I don't know where I placed some newspaper clippings I found and printed up a few years ago that mentioned Sylvia visiting the home she grew up in at 1502 King St in Portsmouth. I did find one I had saved to my computer from back in the day. I will take this as a sign that I must do some housekeeping and get better organized with the things I've printed up. 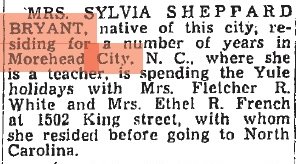 
Fletcher R White passed away on May 14, 1961. She's buried at Mount Olive Cemetery in Portsmouth City, VA. What a wonderful surprise to find on the Find A Grave Memorial for Fletcher that fellow genealogist Nadia K. Orton had taken the photograph for it.