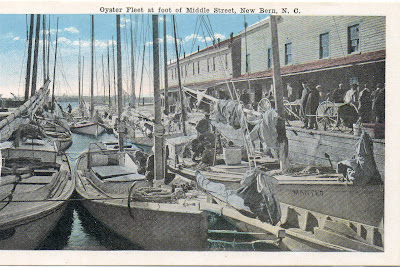 Over the past year,  I started to collect postcards and images of some of the places where my ancestors lived. I bought this vintage postcard because it gave a depiction of what the Fish Market at the foot of Middle St looked like in the early 1900's. My 2nd Great Grandfather,Samuel Whitney, was a drayman. He helped fish and bring seafood into New Bern until his death from Malaria in 1916. I didn't know what a drayman was until I started researching Samuel. Here's The Free Dictionay.com's definition of the word drayman.

Hmm. Not very helpful if you don't know what a dray is. So you can guess what I did next. Here's The Free Dictionary.com's definition of a dray.

To haul by means of a low, heavy sideless cart.

Aha! Now we are getting somewhere.  Now I understood that my ancestor, Samuel Whitney drove a cart either oxen or horse driven to deliver fish in New Bern.

The other thing that strikes me when I look at this postcard is the word Manteo written on one of the boats. Manteo was supposed to be the town where the wife of my 2nd Great Grand Uncle, Susan Ann Burns, lived in before she married Augustus Whitney.
Those Places Thursday Whitney family