William H Goodrich --Where Did He Go? 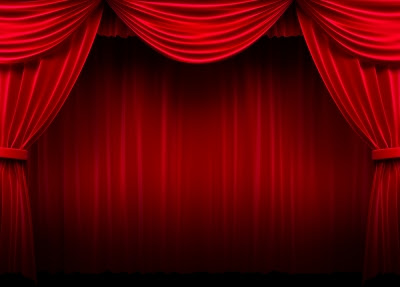 
In case any of you missed it, here's the link to my post from earlier in the week about William H. Goodrich:

William H. Goodrich was the brother in law to my 1st cousin 3x removed, Dr. Oscar Dunn Jones. His sister, Ula Goodrich, was married to Oscar. Anyway, I have to say I was amazed to find out that this man established himself in Europe and worked in musical theater. Usually, within families there is at least one relative who has an adventurous spirit. This is someone who breaks away from the family and sets off somewhere new. Well this dude was one of those peeps. Also, I have to say that I was guilty of making a terrible assumption. I assumed that if William moved somewhere that is was within the United States. This is something I now have on my radar when I do research. See, you live and you learn.

Anyway, I was so lucky to come across records that had photographs of William. In Monday's post I showed copies of consular and passport records that besides photos, also gave information on where he was and what his occupation was from 1900--1919.  Then what became of him?

I looked back over the passport information I had for clues. Here's a view of an affidavit that was attached to his passport that was issued May 21, 1921 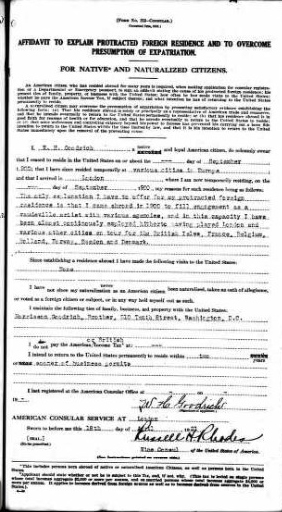 I, W. H. Goodrich , a native and loyal American citizen, do solemnly swear that I ceased to reside in the United States on or about the             day of September 1900; that I have since resided temporarily at   various cities in Europe      ; and that I arrived in   London  , where I am now temporarily residing, on the            day of   September  , 1900, my reasons for such residence being as follows:    The only explanation I have to offer for my protracted foreign residence is that I came abroad in 1900 to fill engagement as a vaudeville artist with various agencies, and in this capacity I have been almost continuously employed hitherto having played London and various other cities en tour for the British Isles, France, Belgium, Holland, Norway, Sweden, and Denmark.
Since establishing a residence abroad, I have made the following visits to the United States:
None

I have never not since my naturalization as an American citizen been naturalized, taken an oath of allegiance, or voted as a foreign citizen or subject, or in any way held myself out as such.
I maintain the following ties of family, business, and property with the United States:
Morrisson Goodrich, Brother, 510 Tenth Street, Washington D. C.
I do not pay the American or British Income Tax at
I intend to return to the United States permanently to reside within   two years or sooner of business permits
I last registered at the American Consular Office at                 on               , 19    .
W. H. Goodrich
(signature of the applicant.)
AMERICAN CONSULAR SERVICE AT   London
Sworn to before me this  18th    day of   April    , 1921 .

How cool is that to see it in his own words that he worked as a vaudeville artist and traveled to all those countries! 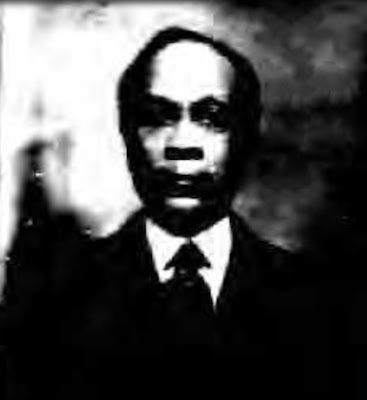 This photo of William is not as clear as the ones that were featured in his prior passports. It showed he had aged some and was perhaps a bit worn from his travels. I looked at the first page of this 1921 passport application and I believe I came up with a reason for the change in his appearance.

...where I am now residing for the purpose of music hall artist, at present unemployed...

I wonder for how long he went without work? Did he have a support system in Europe, like friends who could help him out? He had been overseas since September of 1900, so I would hope that would be the case.

According to the affidavit shown above, he hadn't made a trip back to the United States. Did he miss his family?  All that time without seeing them I can't imagine that being easy on the spirit. How did he cope?

All these questions with no answers and now one more question to add to the list. Where did William H. Goodrich go?

I kind of got the sense that this man was not going to return to the U.S. after all that time away.  Europe was his home and I believe that is where he stayed until his death.

I went back over the consular registration certificates that I featured in my Amanuensis Monday post. The address listed as his place of residence was 15 Mead Row, Kennington Road, London S. E.  Perhaps in his final years this is the area where he remained.

So of course I went to Google Maps to see if I could find the place.

From the information I found on-line, this area is now part of a housing development that was built in the 1970's called the Wellington Mills Estate. I have to see if I can find pictures of what this area looked like back when William lived there. I will keep you posted.

This borough of London is called Lambeth. Now you are probably wondering why that may be important. 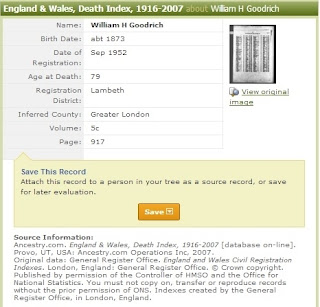 Now I am not saying that this is my William H. Goodrich but it sure does look like a good possibility.