And Then...That Was When I Felt It 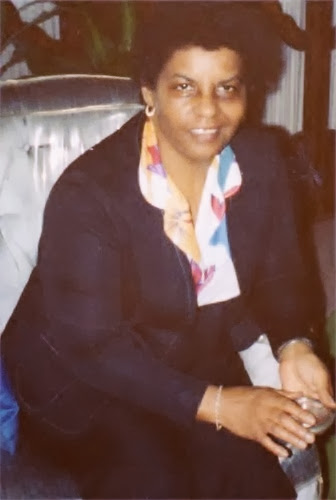 I know many of you out there can relate to this. In the middle of putting together my post The Book Of Me: Prompt 7 --Grandparents --Part Two, I felt like I needed to take a little break from writing and so I did.  I had just finished writing a little bit about my step grandma, Vadnie Randolph Sutton Harrison, so I thought to myself, why don't I see if I can find out anything new on her.  When Vadnie and my maternal grandfather Lemuel Harrison wed, it was a second marriage for them both.  Before I get into what I discovered recently, here's what I know of my grandmother's life before she met my grandfather.

Vadnie Randolph was born in March 17, 1925 in New York City. Her mother I addressed as "Mrs Randolph" when I was a child. It turns out Mrs. Randolph's had a first name and it was Louise. According to the 1940 census, mother and daughter resided at 210 West 153rd St in Harlem.

Vadnie and Louise were living with a William Marshall who was described as the head of the household. Louise was regarded as his common-law wife and Vadnie was noted as being Louise's daughter. So who was Vadnie's father?  That will be the subject of a future post.

While growing up, I knew of my grandmother Vadnie, simply as grandma. I guess I kind of knew she had a life before meeting my grandpa Lemuel. I knew of her children my uncle Harry and my aunt Linda. The specifics of how someone is an aunt or an uncle to you often aren't made clear until one becomes a grown up.  It wasn't until earlier this year that I thought to ask my mother about the man who was Harry and Linda's father and Vadnie's first husband. She said he had been a very good looking man. He reminded her of Harry Belafonte. Then she mentioned that he had died in the Korean War. Now for whatever reason, perhaps I was distracted or something at the time, I really didn't "hear" those words when she said them to me.

Now let's get to what I found. 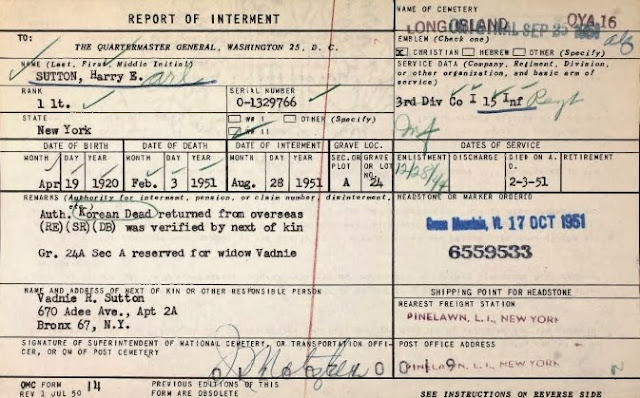 
This is the U.S. National Cemetery Interment Control form for a Harry Earl Sutton

Auth.  Korean Dead returned from overseas (RE) (SR) (DB) was verified by next of kin
Gr. 24A Sec A reserved for widow Vadnie

Name and address of next of kin or other responsible person

And that was it. That was when I felt it. My dear sweet grandmother was once a young widow with two babies to raise on her own. For a moment I couldn't breathe. Then, I thought about that little lady (she was under five feet tall.) I used to call her my honorary Irish grandmother because her birthday was on St. Patrick's Day. What strength she had! Her eyes always seemed to be bright and smiling when I would visit. I look back now and wonder what other sorrows she may have kept to herself.