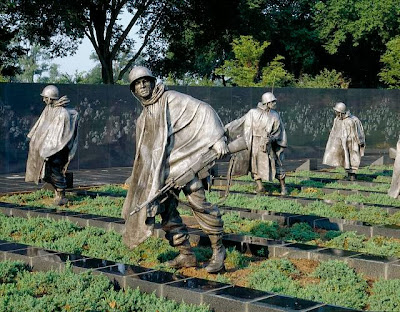 Today was a gem of a day! I did some more digging for information on my step-grandmother's first husband, Harry E. Sutton. If you missed my earlier posts regarding him, here are the links:

And Then...That Was When I Felt It

I found an account of what happened during the evacuation of Hungnam beachhead during December 1950 and the role that the platoon led by Lt. Harry E Sutton played in it.

The Red assault disentegrated when each American was down to his last ammunition clip of eight bullets. That's how close the Reds came to penetrating at least the outer U. N. defense ring.

The savage battle of "Sutton's Ridge" began before dawn Monday. The American counterattack ended Tuesday noon. The story can now be told without endangering security.

At 7:45 am Monday the Communists struck. Just a small attack, but made by ferocious men who would not stop even when wounded.

The Americans moved back and forth in their old fashioned trench, picking off the Reds.

M-Sgt Tyler Collins of Malone, Fla., stood bolt upright and picked off seven Communists. A bazooka man killed 10 with a single shell. But they kept coming.  Finally at 7 p. m. there was a break.

But two hours later the snarl of small arms began again from the opposite ridge.

Then at 6 a. m. Tuesday, the howling Reds assaulted Sutton ridge. With flashing bayonets, they burst into the strongpoint on the last of the three nipples on Sutton's Ridge.

The Americans there fought desperately.

In the breaking dawn they could see the Communists crumple and tumble down the slope and then see new men replace them.  Bodies were strewn crazily on the slopes.

"We gave them everything we had," Sutton said.


Lastly, I would like to say to all our Veterans on this Veteran's Day thank you for your service!