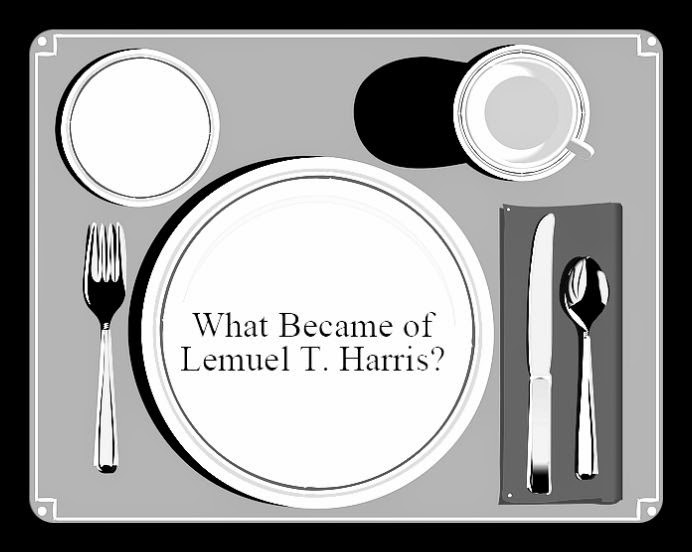 You could say I have fallen behind a bit on the 52 Ancestors Challenge. Well, life happens sometimes so I've decided to do the best I can with posting. If you aren't familiar with the challenge put forth by Amy Johnson Crow of the blog No Story Too Small, click
here.

Lemuel T. Harris was one those ancestors who got away. His life for the most part remains a mystery to me because he was one of those ancestors who ventured out away from his birthplace. I have a special love for my ancestors who stayed put because there is so much more information available on them. I am blessed because I have been able to locate many records on my Craven, Hyde, and Carteret County, NC ancestors. Lemuel was a man on a mission though, and you can't stop a man on a mission. Who was he? He was the brother of my 2nd great grandmother Sarah Jane Whitney Harris.

He was born around 1867 most likely in New Bern though I don't have any documentation on that. His parents were a Bristow Harris and Amy Brown Harris both of whom I've written about previously on this blog. If you click on their name's you can read more about each of them.

Anyway, here's the lowdown on Lemuel.

I can trace him to the 1870 and 1880 Federal censuses in New Bern residing with his sister and parents. The oral history that was passed down to me from my grand aunt Carrie from her mother was that my aunt Carrie's grandmother, Sarah Jane Harris Whitney had to go to Boston in regards to her brother's things when he died. Now my 2nd great grandmother Sarah Harris Whitney died in September of 1937 so I know this trip took place prior to that time.
So with that information in mind, I looked at city directories and the Federal Censuses for Boston, MA for more information. A few clues turned up.

The first thing I noticed was a Boston city directory listing for a Lemuel Harris from 1886. He's the only Lemuel Harris listed which was helpful. 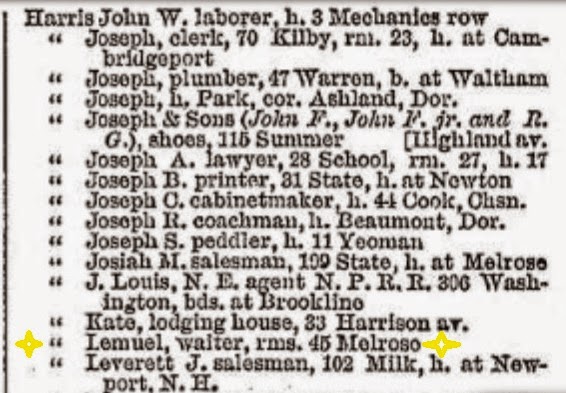 I continued looking through directories to see if I could build a case to figure out if this was my Lemuel Harris.  Here are the results of what I found from the years 1886--1931.  The addresses I could figure out, I plotted on a map to get a sense of the area this Lemuel called home.

This is a closeup of area noted with purple
balloon on the first map.

Closeup of area marked with pink balloon from the first map.

A closer view of the area labeled with the green bubble.

Here are the addresses I found for Lemuel Harris:

For all of these years, this Lemuel Harris' occupation was listed as a waiter with the exception of the years 1903 and 1904 when it was noted as a porter. These appear to me to be rooming houses because on a number of the directory entries the abbreviation (rms) was noted next to the address.

I found only one entry for a Lemuel T. Harris listed on the 1930 Federal Cenus for Boston.

This does appear to be the same Lemuel. The census shows him listed as a "lodger" living with the family of Everton L Morrison. Everton Morrison was a prominent mortician in the community according to a newspaper article I found online. You can check out that article here.  I took a look at census records for Everton and found that his occupation was that of a waiter in 1920. He and Lemuel I bet met through work.

Important things to take note of:

Party? Hmm. We'll get back to that later. Okay so this where it gets interesting. I tried Googling Lemuel Harris and found two newspaper articles. The first was from the Boston Daily Globe dated July 12, 1890.  Apparently, Lemuel was out with friends one evening and was refused service. He gave testimony on the behalf of his friend, Robert P. Seales who filed the complaint about the incident. 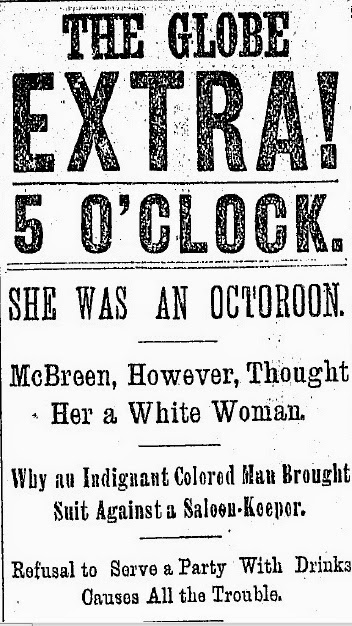 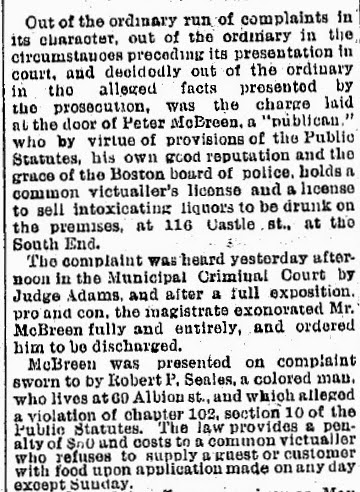 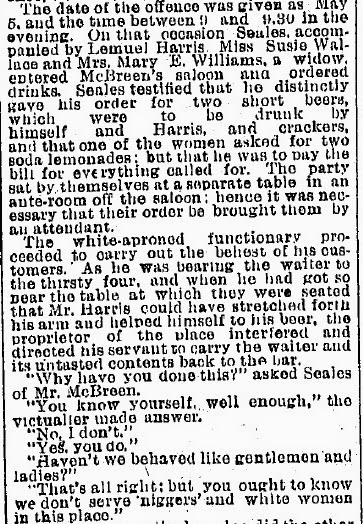 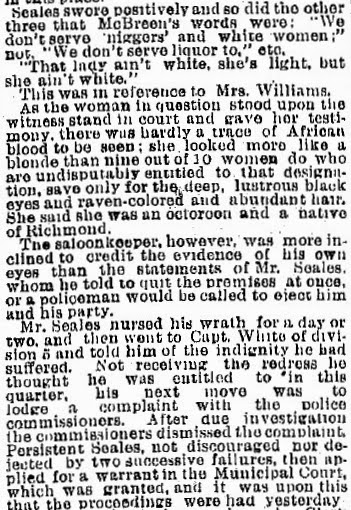 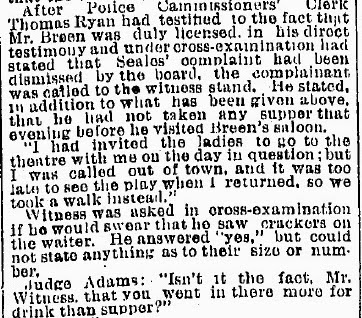 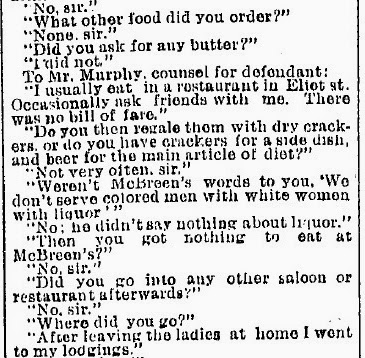 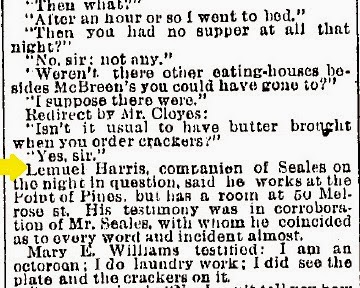 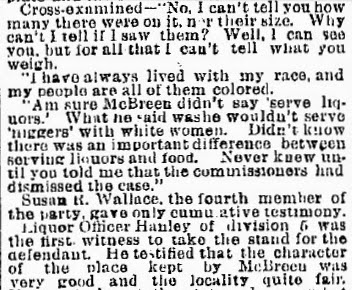 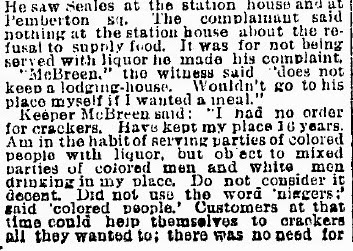 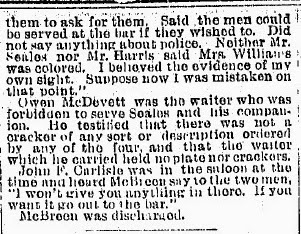 I learned from this article that Lemuel Harris in 1890 was working somewhere called "Point of Pines" and was renting a room at 50 Melrose St.

It turns out that Point of Pines is a beach area located approximately 8 miles north east of Boston that is considered part of the city of Revere, MA. I found the following information on the City of Revere's website quite helpful:

In 1881, a company of prominent Massachusetts men, among them the ancestors of former United States Senators Leverett Saltonstall and Henry Cabot Lodge, Jr. formed a company and purchased 200 acres of land in the Point of Pines. They invested $500,000 in a complete summer resort with hotels, bandstand, racetrack, amusements, piers and bathhouses. They provided gaslight illumination through beautiful arches above the walks and driveways, using gas jets and special globes. Over 2,000 people were present at opening ceremonies for the Pines Hotel, considered the largest on the Atlantic coast.

So perhaps Lemuel worked at the Pine's Hotel or one of the other establishments that existed in that community back then. Looking over all the different places Lemuel rented over the years, I get the impression steady work was hard to come by in his occupation.  He had to have been someone who could adapt quickly to change.

A book called "The Negro Wage Earner" by Lorenzo J. Greene and Carter G. Woodson, provided me with some insight on decline in work opportunities for African American waiters from 1890 into the early 1900's.  With the influx of white immigrants into the country at that time, hotels and restaurants transitioned from hiring black waiters to white. It must have been hard on Lemuel, constantly having to move where the work was.


So let's go back to the 1930 census where it showed Lemuel was a waiter who worked in the "party" industry. What could that mean?

Here's the other newspaper article I came across.

Lemuel Harris was a popular clubman. Hmm. Now does that mean he was a promoter of some sort or that he worked in clubs as a waiter? Not sure. I'll have to keep digging to get some more clarity.

In the meantime, I will be sending off a request for a death certificate for this Lemuel Harris to find out for sure if indeed he's mine. Let's see what I can find out.
52 Ancestors in 52 Weeks Harris family