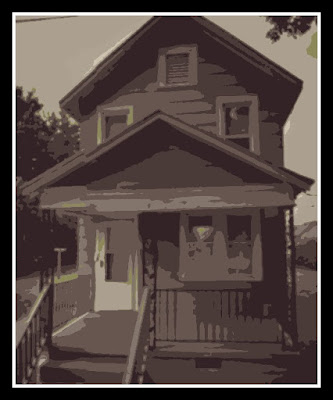 For this week, I chose not to follow the prompt. This post came about in quite a random fashion. Sometimes, I'll go to my tree and just poke around through record sets searching by surname and location and this can be the catalyst for a new post. That's what happened here with this one.

So, I'll begin by sharing from Ancestry.com's recently released Wills & Probates, Estates & Guardian Records Collection. If you haven't had the opportunity to check it out yet, by all means do so. Here's the link from Ancestry.com's blog, that will provide you more information regarding this release:   U.S. Probates are here! 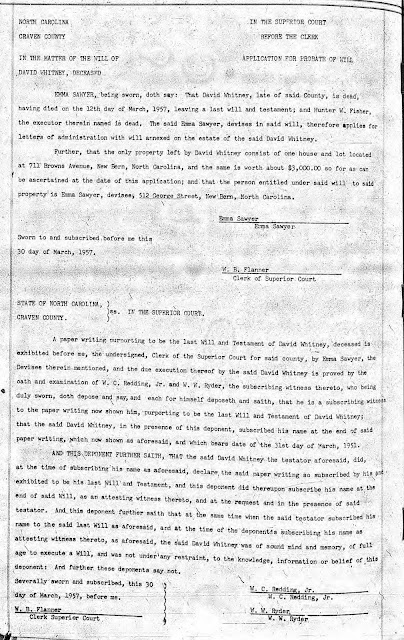 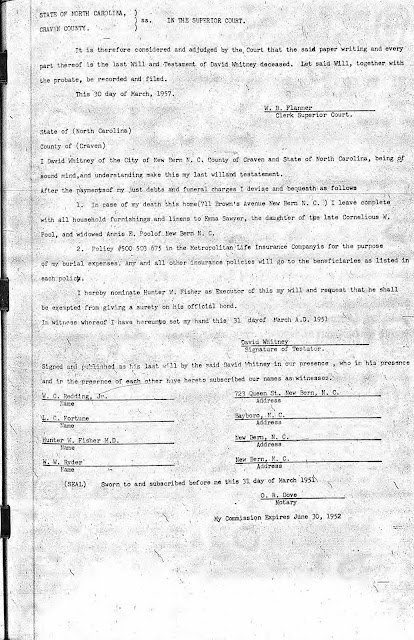 Upon my great grand uncle's death he chose to leave his house and home furnishings to a woman named Emma Sawyer. I found this to be a bit curious since she wasn't a blood relative. Samuel David Whitney didn't have children with either of his two wives and both had predeceased him. My great grandmother Carrie Whitney Harrison and her family lived next door to Samuel. She passed away in 1939. Carrie's older children for the most part had moved north and out of North Carolina by the time Samuel passed away in 1957. Perhaps there was no one in the family who was interested in the property. With all this being said, I couldn't help but wonder what the relationship was between Emma Sawyer and Samuel. Was she perhaps a family friend who helped to care for him in his later years. Did Samuel have a friendship with Emma's parents since he made a reference to them in his will?

This is where things get interesting.

The first thing I did was a search on Google with the name " Emma Sawyer" and "New Bern" as my search criteria.

I came across an article form Dec. 12, 2010 on a website called New Bern Now. The article's title is A Remembrance – Tent City – 88th Anniversary of the Great Fire of 1922. Click here to see the entire article.

The article describes a day of reflection that took place on Dec. 5, 2010 about one of New Bern's worst days. That terrible day was Dec. 1, 1922  otherwise known as the day of The Great Fire.

That same article happens to make mention of an Emma Sawyer Poole (Supposed to be Emma Poole Sawyer. Oh well, we all make make mistakes.) During the event, the great great granddaughter of Emma Sawyer, D'Chelle Hicks, read a poem that was written by none other than Emma herself! The poem itself was not featured in this initial article I found, but I did find it on another website. You can read it here. The poem describes how the fire spread through the mostly African American neighborhood of New Bern on Dec. 1, 1922. You can view a map of the area affected on a post I did last year here.


Now all this still doesn't explain what Emma Sawyer's relationship was to Samuel David Whitney but I still found it interesting. I started theorizing how these two came to know each other.

Here's what I do know about Emma Poole Sawyer 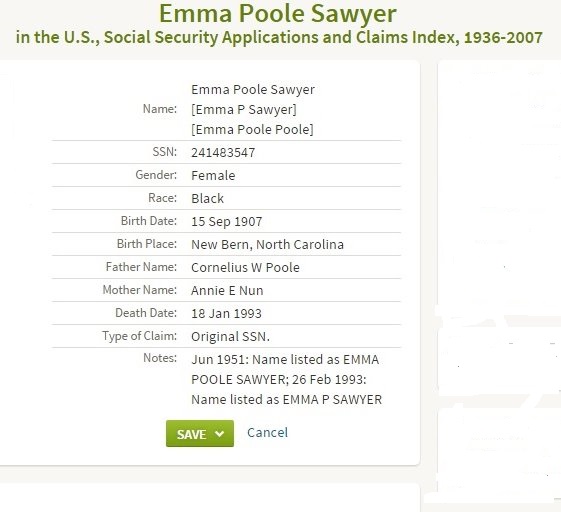 Cornelius Poole was Emma's father as mentioned in Samuel David Whitney's probate record and her mother was Annie E. Nunn who died prior to 1910. Cornelius Poole would go on to marry by 1920 a woman named Mary Wilkins who would have truly been the only mother Emma would have known

Cornelius Poole's occupation was a "keeper" of a "livery stable." He owned his own home located at 93 Bern St. His stable was located at 97 New St.

With the asterisk next to his name, it appears that Cornelius was the only black livery stable owner in the bunch. He would have been an important member of the community, known by many I would think. This may be where the Whitneys connection to Pooles began. Samuel David Whitney's father, also named Samuel Whitney, was a drayman. Samuel Whitney Sr. would have needed a place to keep his horses.

I took a couple of days off from writing this post because life got busy as it often does. When I picked things up again, I was curious to see if perhaps the relationship between the Pooles and Whitneys may have begun further back in time. While, researching Cornelius Poole, I learned the name of his father which was Malachi Pool. I decided to do a google search using "Malachi Pool"and "New Bern." What came up is genealogy gold for anyone researching these Pool/Pooles of New Bern, NC. The New Bern-Craven Public Library has in it's collection the Pool-Jones Family Bible. Here's the link:  Pool-Jones Family Bible. Lots of names and dates of birth are found on the first page, including the birth date of Cornelius Walter Pool who was born Feb 9th 1877.

Sorry my attention deficit disorder is really acting up in this post :) Back to my initial point now. What was the relationship between the Samuel David Whitney and Emma Sawyer? I think this goes back to what happened to the neighborhood they lived in after The Great Fire of 1922. 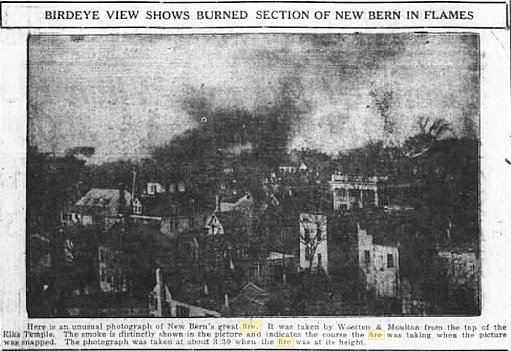 I believe when people endure a crisis as devastating as the one that occurred in New Bern on December 1,1922, a bond forms among the people of that community. Folks do what they can to help one another. Perhaps shortly after the fire, Cornelius Poole's family helped Samuel David Whitney and his family. Perhaps those favors were not forgotten by Samuel and he wanted to do a good deed for the folks who once helped him. 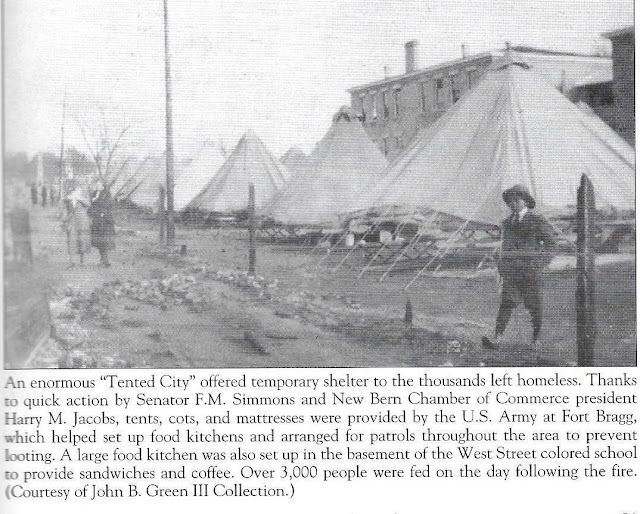 Temporary housing in the form of a "tent city" was set up for those who were left homeless from the Great Fire. A tent is temporary shelter. A house now that can become a home. People lost homes on December 1, 1922. Upon his passing, Samuel David Whitney made sure that Emma Poole Sawyer would have a place to call home.

Of course the way Samuel David Whitney and Emma Sawyer came to know each other could have been something much simpler. She may have been someone who was hired to help care for him My grand uncle died from cirrhosis of the liver, something brought on most likely from alcohol abuse. The loss of two wives and his sister probably weighed heavily on his heart.


Emma Sawyer already had a place to call home by the time Samuel died in 1957. After The Great Fire of 1922, her father and step-mom were able to rebuild their lives. Their home was at 618 Bern St., which was very close to where Samuel resided. 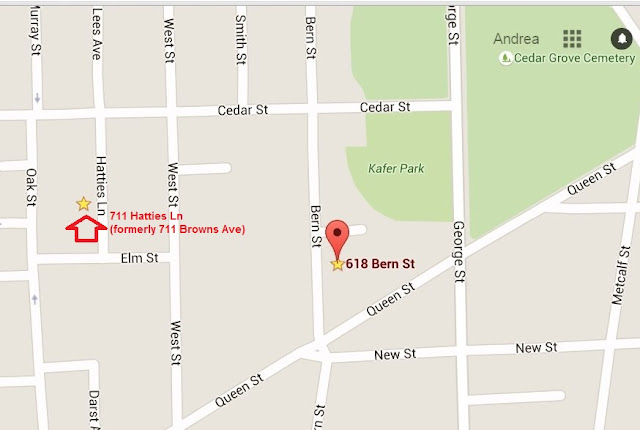 Cornelius Pool(e) died November 4, 1938. His widow, Mary continued to live on Bern St until her death on September 8, 1962. Emma Poole married Leonard Augustus Sawyer on June 2, 1930. Emma and her husband who was a tailor resided on on George St in 1937 but by 1947 Emma was back living at 618 Bern St. I haven't found the death certificate for Leonard Sawyer yet but I believe he died around that time. I know he was deceased by 1954 because...

After Samuel David Whitney's death, Emma didn't stay at Brown's Ave. Her last place of residence I found for her was 1902 Washington St, New Bern. She passed away on January 18, 1993.

It seems to me that the house left to Emma Sawyer was more than likely a way to pass on something to someone who was good to Samuel David Whitney in his later years.
Harrison New Bern Poole Sawyer The Great Fire Of New Bern Whitney family