August 04, 2011
So what do I know about Simon D Harrison, my 3rd great grandfather?  Well it all begins with his son's death certificate which according to it he was born in Craven County, NC. I could not find a Simon Harrison on the 1870 or 1880 Census, so I said to myself try doing Google Search. When I did, I came up with an interesting result in the "North Carolina Freedman's Savings and Trust Company Records"

So the first thing I said to myself was, Could this be my Simon Harrison? What is this "Charitable Society?" Next I was able to pull up the following in the "Laws and Resolutions of the State of North Carolina passed by the General Assembly."

Sec 2. That with the above named they and their associates and successors shall have perpetual succession and a common seal, may sue and be sued, plead and be impleaded and in general exercise and enjoy all rights, powers and privileges that are usually incident to corporate bodies of like nature.

Sec 3. That this act shall be in force from and after its ratification.

So it looks like the "Charitable Society" was the The United Brotherhood Society of New Bern, North Carolina. Did this group have anything to do with the Methodist Church? Simon's son, Thomas, was a Methodist minister. It would make sense that Simon might also have been affiliated with the church. Here's what I found.


I couldn't find any direct reference showing Simon affiliated with the Methodist Church but after researching some of the other members of the United Brotherhood Society, I found this excerpt regarding Edward Richard Dudley, in a book called "Gender and Jim Crow" by Glenda Elizabeth Gilmore.


The oldest, Edward Dudley, was twenty-five. He could read and write and was soon practicing a lucrative trade in New Bern as a cooper, which he probably learned in the tobacco factory. Dudley quickly assumed a leadership role amid the chaos of the Federal-occupied town. He joined a Masonic lodge and served on the police force. A pillar of Saint Peters, the first African Methodist Episcopal (AME) Zion church in the South, Dudley headed the statewide Grand Lodge of Colored Good Templars, the first black branch of an international temperance order. Sometime between 1862 and 1868, Dudley married a biracial woman named Caroline, who, like him, had learned to read and write in slavery. She joined her husband as a Good Templar. The Dudleys taught their children to take pride in their African American roots and to take their places among the best people, regardless of race.

I went back to the "Laws and Resolutions of the State of North Carolina passed by the General Assembly." and found the following act regarding the Good Templars.

An Act to Incorporate the Independent Order of Good Templars, of New Bern, North Carolina.

The three names I have underlined in the last passage were members of the United Brotherhood Society of New Bern. I know that Edward R Dudley was a pillar of St Peter's AME Zion's church in New Bern. I went back to the "Laws and Resolutions of the State of North Carolina passed by the General Assembly" and found that there was an act to incorporate "The African Methodist Episcopal Singing School Society of New Bern" in February of 1871. Virgil A Crawford and Edward R Dudley were both listed amongst it's members. I think based on all this that it would be fair to assume that the United Brotherhood Society was in some way associated with the Methodist Church, making this Simon Harrison a good contender for mine. However, I wasn't satisfied.

I found in "Chas. Emerson & Co. City New Bern Directory" for 1880 another good piece of evidence.

The (c) means colored. Now I was able to find out from information provided by Victor T Jones of the Kellenberger Room at the New Bern Public Library, that Jerkins Alley is now what is called North Cool Ave. 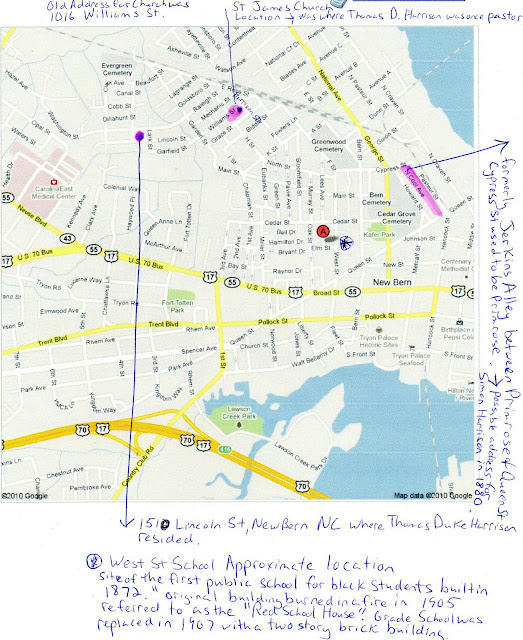 
The red A that's encircled is the approximate location of the home of my great grandfather, John T. Harrison. Geographically, it is still looking real good that this is my Simon Harrison.

Initially when I started researching records, I used for the most part Ancestry.com, so I decided to give FamilySearch.org a shot. A possible lead came up when I plugged in Simon Harrison and Craven County, NC.

I decided to double check the census in Craven County again under Simon first and then under Rosanna. Nothing came up under Simon, but under Rosanna, this is what turned up. 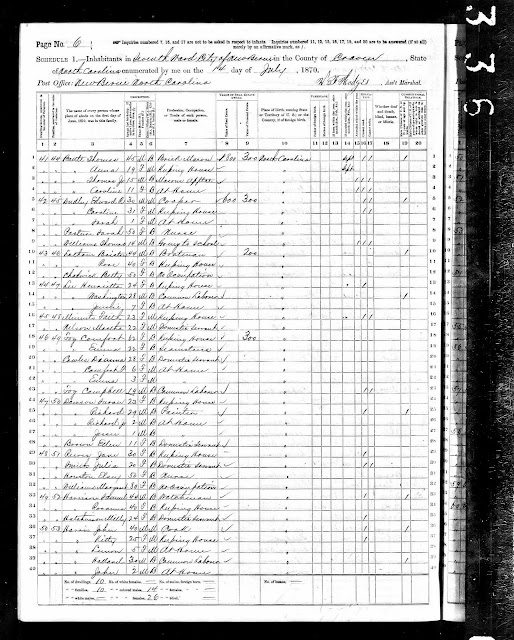 
If you scroll down the page, one finds a Samuel Harrison, age 44 and a Rosanna Harrsion, age 40. His occupation is a watchman and hers keeping house. What I find most interesting is that above on the same page you find Edward R Dudley and Bristow Latham, both members of the United Brotherhood Society of New Bern, North Carolina. Are you thinking what I'm thinking? I think the census taker took down the wrong name.


I know I can't prove it definitively yet, but all this makes sense. I think this is my Simon. I guess I have some more digging to do but that will have to wait for another day. My son is dying for me to help him stuff his shorts to make him Mr. Big Pants. 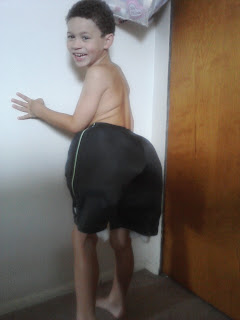