The Whitneys, The Azores and Me-- Part Two

August 14, 2011
So the Whitney line of my family according to oral history is descended from people who came from the Azores Islands intially and later traveled to Bermuda and lastly arrived in the United States. On my last post, The Whitneys, The Azores and Me--Part One,  I shared possible reasons why my ancestor would have left his homeland to come to America. Now, his arrival is where I am focusing on for this post. The email from my Grand Aunt Carrie says that her grandfather's father's family came from the Azores.  Let me share how the family line branches back in time first.

Now from my Great Grandmother Carrie we travel up the tree to my 2nd Great Grandparents Samuel and Sarah Harris Whitney. Samuel was my Grand Aunt's Grandfather she was referring to in her email. Now Samuel's father is where we start to tap into the beginning of my Portuguese lineage.

This is my theory regarding my family line. I have only circumstantial evidence to support it, but so far my theory I think is looking good.  Samuel Whitney was the son of a Thomas Whitney and Margaret Merritt who resided in Swan Quarter, Hyde, NC. This Thomas Whitney I believe is one of four sons who traveled with their father Samuel Whitney(born about 1775) to America.

Here's my evidence so far:

Using Ancestry.com, I found in the Passenger and Immigration Lists Index 1500's-1900's and the Atlantic Ports Gulf Coasts, and Passenger Lists Roll 1: 1820-1871 entries for Samuel Whitney. 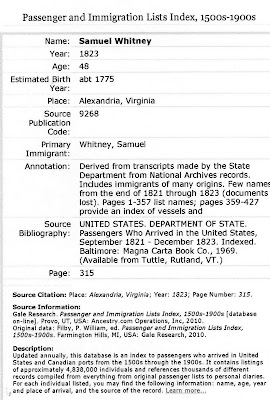 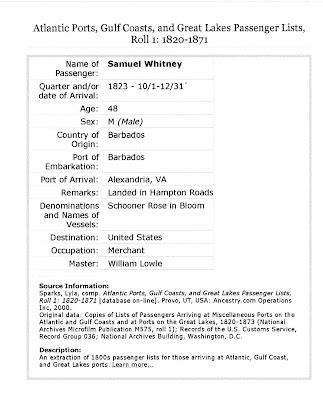 Things to take note on both records include country of origin, age, and date of arrival. Country of origin is listed as Barbados. Could this mean my oral history is incorrect or perhaps my ancestor spent time in Barbados as well as Bermuda.  Having an age listed gives us a birthdate for him of approximately 1775.  Date of arrival and the remarks are I think especially interesting. 1823 is the date of arrival and this makes me think back to my previous post and the article I found by Robert L Santos, "Azorean Migration".

Perhaps my ancestors motivation for leaving the island was for the sake of his children.  The remarks on the above passenger list may reveal another clue. Port of arrival was Alexandria, VA, however the remarks state they landed in Hampton Roads.

Here's a map of where Hampton Roads, VA is marked as point A. New Bern, NC  I have circled to the south. Now if Samuel Whitney's eventual destination was New Bern, it would make no sense to travel further on north to Alexandria, VA. 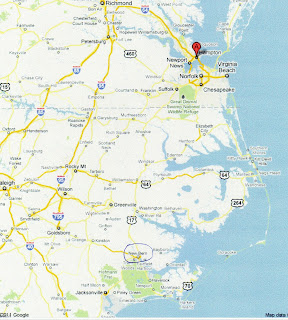 The earliest record I have found for who I believe are "My Whitneys" is from the 1830 Census. 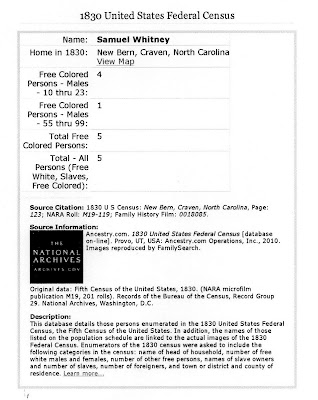 Samuel Whitney (my 4th great grandfather) I believe is the one male age 55-99. So far from my research from the Whitneys I have found in Craven and Hyde, NC, I believe three of the four sons are the following:

I am still researching to see if I can identify the fourth.

My next post I will include a correspondence from someone who is descended from 2nd Great Grandfather's brother, Augustus. This correspondence was important to me because it supported what my family's oral history said about the family being of Portuguese descent.