They are also shown on the 1880 Census still living in Hyde . 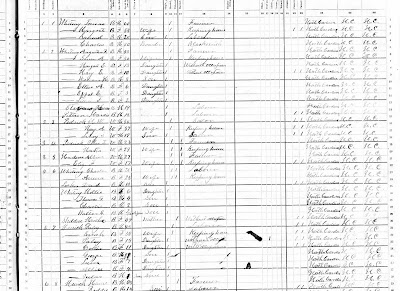 It's funny I haven't looked at these records in awhile and I am already kicking myself now that I am looking at them again, for why I didn't see something sooner. I noticed on the 1880 census that the Whitneys were living near some Merricks. My 3rd Grandmother Margaret Whitney's maiden name according to her son's death certificate was listed as Margaret Merritt. Perhaps it was Merrick. Often one finds records that are incorrect due to relatives incorrectly listing names because they have forgotten information or perhaps the person misheard their loved one long ago when they were talking about their family line. Maybe the record taker misheard what they were being told. I'll have to get back to you on this one after I do some more digging to see what I can find out.

Anyway, based on the evidence I have gathered so far I am working under the assumption that the Samuel Whitney living in New Bern, NC on the 1830 and 1840 Censuses is the father of Thomas Whitney. So why did Thomas move to Swan Quarter?  More than likely the family was just simply looking to make a living and a place that they could call home. When it comes down to it, that's what we are all trying to do isn't it? I found an excerpt online from a book cook called "Hyde Yesterdays--A History of Hyde County", written by Morgan H. Harris. I found it on the Hyde County GenWeb Page. This passage describes a Civil War battle that occurred near Swan Quarter.

The Battle in Hyde County near Swan Quarter, led by Captain Colin RICHARDS [RICHARDSON] on March 1-6, 1863 - The Union troops anchored in Rose Bay and discovered that most of the bridges and roads had been destroyed by slaves upon the orders of a Henry CREDLE who was taken as prisoner. The troops made a raid around the west side of the lake to Fairfield. About three miles from Fairfield, they met some of the local people who they chased into the woods with little problem. When the Union troops got to Fairfield, it was deserted. They then marched around the lake to Lake Landing, but not before they captured a boat which was sailed to Lake Landing in order to save the bridge. During the trip around the lake, the troops burned or destroyed everything they could find. At Lake Landing they destroyed all the fences, using the posts to rebuild the bridge. From Lake Landing, they marched to within a mile and a half of Swan Quarter, where they were attacked from the swamp on the right side of the road. This battle was about where the sand pit is between where Swindell's Fork and O.A. PEAY School are today. Bate JARVIS and Levi JARVIS from Swan Quarter were killed in the battle. [Bate JARVIS was not killed.] After the battle, Captain RICHARDS marched into Swan Quarter where he found out that about 300 men were waiting in ambush for him at Rose Bay. He then ordered members of his troop to sail to Rose Bay and have the boats brought to Swan Quarter. He sailed back to Washington with little trouble.

I can't imagine the terror that people lived in back when this was happening. All I keep thinking about is how would I handle this. How would I keep strong so I could keep my babies safe. It's a reminder to me that the folks that came before us had a well of strength so deep and vast that if we listen and need it, we can tap into it. That's what keeps me going when times are tough.