August 21, 2011
Well, back to the Whitney line when it was in New Bern. Specifically, when my 2nd Great Grandfather, Samuel Whitney (1856--1916) made the jump to live in New Bern versus his childhood home in Swan Quarter, Hyde, NC.

Samuel purchased the land that eventually was passed down to his daughter Carrie and his eldest son Samuel back in  July of 1883.  Interesting note: Apparently he made the purchase before he married my 2nd Great Grandmother Sarah J Harris. Also, my 3rd Great Grandmother is referred to in the deed as Annie Harris. Family Oral History has been that her name is Amy Harris and that was also, evidenced on her daughter Sarah's death certificate. Still it was interesting to learn that when he purchased the property, Amy (or Annie as referred to on the deed) was granted life tenancy. 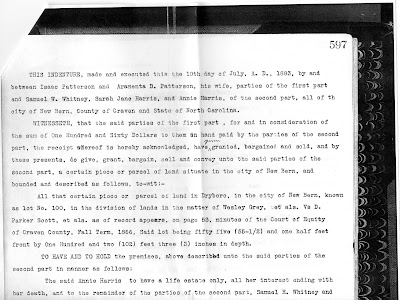 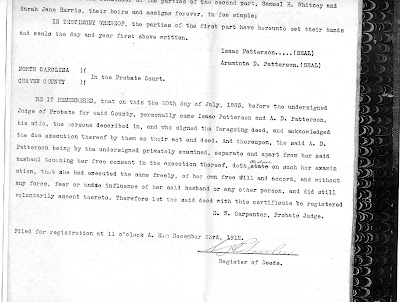 My 2nd Great Grandparents were married on August 8, 1883. Samuel was 23 and Sarah 22 at the time of their marriage.

Back to the deed. It reads on it that the land that Samuel purchased was part of a division of lands involved in a court case Wesley Grey vs. D Parker Scott. This peaked my curiosity so I emailed Victor T Jones of the Kellenberger Room of the New Bern Public Library to find out more about this case. Here's what he emailed me.