October 04, 2011
This Civil War Pension File continues reveal great little tidbits of information. One of the things I was hoping to find out, was who Augustus Whitney worked for before the Civil War. In his U.S. Colored Troop Service record it showed that he was a servant before the war but that could mean he was free or he was a slave. He I believe was of mixed ancestry. His father and grandfather were Portuguese and his mother black. If his mother was a slave, then he and his siblings would have been as well. What kind of person did he work for? Did whoever he worked for treat him with some level of compassion?  One hopes for so much from these old pieces of paper we research. Anyway, here is an affidavit for a Dr. Morgan M. Murray from April 27, 1883 that sheds some light on Augustus Whitney's pre-Civil War life. 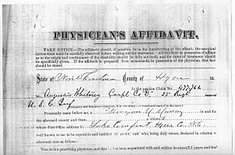 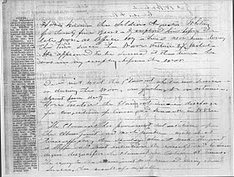 State of North Carolina County of Hyde In the pension Claim No. 477.762 Augustus Whitney Corpl Co. D 35 Regt U S C Inf Personally came before me a Morgan M. Murray in and for the aforesaid county and State _________________a citizen of _________________whose Post Office address is Lake Comfort, Hyde Co. N.C. well known to me to be reputable and entitled to credit and who being duly sworn, declared in relation to aforesaid case as follows:
That he is a practicing physician and that he has been acquainted with said soldier for about 25 years and that (following testimony hand written)

Have known the soldier Augustus Whitney for twenty five years. I employed him before the late war as Office boy--Lived near him during this time since the war --within 2 1/2 miles. He appeared to be sound at these times he was in my employ -before the war.

Did not treat the claimant while in Summer or during the War, on furlough or otherwise absent from duty. Have treated the claimant since discharged for congestion of liver and stomach in 1882.

The claimant has permanent dislocation of the elbow joint and much trouble with it at times effecting a shoulder when at work. The joint is stiff and joint indention the result and to some degree disqualifies the claimant (next word?) when at times. The injury to the elbow joint was (next part unclear) Since, the result of a fall. 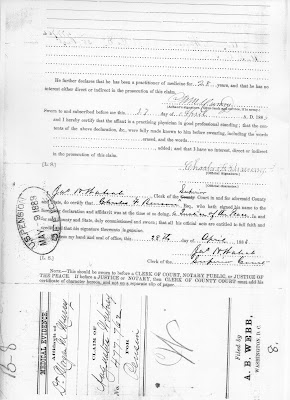 He further declares that he has been a practitioner of medicine for 28 years, and that he has no interest either direct or indirect in the prosecution of this claim.
M M Murray

An affidavit I found further in the file from Augustus Whitney showed that he was indeed a slave before the war. From the testimony provided by M. M. Murray, it sounds as if Augustus was hired out to him.
Guess I'll be doing some research on this Dr. M. M. Murray guy huh?
Whitney family