October 30, 2011
Donnell Farm may have been the reason my folks wound up in Hyde County. If you have read my earlier posts about the Whitneys, then you know I believe that my Whitney Ancestors came to America en-route to Virginia and then traveled south to New Bern, NC. They, according to oral history in my family were of Portuguese descent from the Azores Island, arriving and staying in Bermuda for a period of time and eventually making their way to America....and as on the show Seinfeld they would say, "Yadayadayada, here I am."   So what's the connection to Donnell Farm?

For the years 1830 and 1840, the family is headed up by my 4th great grandfather Samuel Whitney, residing in New Bern, NC. 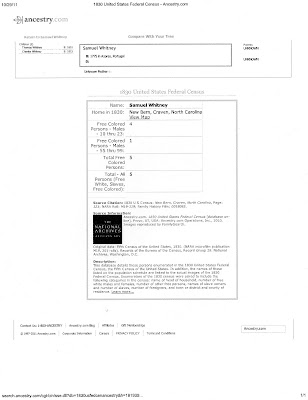 
For 1850 and 1860, I cannot find the family on the censuses for New Bern or Swan Quarter, Hyde, NC. Perhaps they had moved to a different area or were simply missed by census takers.

By 1870, Thomas Whitney, the son of Samuel and his extended family are shown  living in Hyde County. 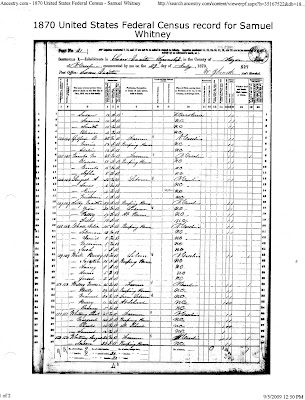 Now this is the part where we start talking about Donnell Farm. I found an excerpt from a book on-line called " The Development of African American English," by Walt Wolfram and Erik R. Thomas. The passage detailed information regarding a Judge John R. Donnell who owned a plantation in Hyde County. He was a large slaveholder and he was also an absentee landowner who resided in New Bern. Many of his slaves were brought in from New Bern to his farm in Hyde County. "In addition to slaves a small number of free African Americans lived in the county throughout this period." When I read those words, I started thinking about this theory.

Now if Thomas Whitney was of Portuguese descent, who would he have had the opportunity to meet and marry back in the mid--1800's? I believe he was one of the Free Colored Persons --Males aged 10 thru 23 on the 1830 Census under the household of his father Samuel Whitney. More than likely he would have met and married a slave or another free person of color. Then the Civil War hits. New Bern becomes Union occupied and eventually Hyde County as well.

Another book I came across called "Masters of the Big House:  Elite Slaveholders of the Nineteenth Century," by William Kaufmann Scarborough, had an interesting continuation of the story of Judge Donnell in it. It describes what happened to some of his assets during the war.

One of those driven from his home was Judge John R. Donnell who fled to Raleigh, where he remained for the duration of the war. Donnell later complained that it had been his "peculiar misfortune" to have had nearly all his business interests in the "most endangered" locations:  New York, New Orleans, New Bern, and above all, Hyde County, North Carolina, "where a large and valuable plantation with more than 300 slaves" was "now behind the lines of the Enemy or entirely beyond his control."

Then I found another interesting resource, a magazine called High Tides Vol XXVII Number 2 Fall 2006. The name of the article is "Hyde County Public Buildings and What Went on Inside:  The Antebellum and Civil War Years." by Richard B. Lupton

The August 1865 court assigned all the free Negroes living on the North Lake Farm of E. H. Saunderson and all hands subject to the road living on the farm of John R. Donnell to work on the main road leading from the lake to the fork at A.B. Swindell's( This order probably concerned the emancipated slaves that continued to live on the John R. Donnell's land after the Civil War.)

So from all this I believe that the Whitneys probably sensed an opportunity in Hyde County to be able to work the land, perhaps maybe even to own a piece for themselves. Now this is just a theory but it is sounding pretty good to me so far.

Donnell Farm is sometimes referred to as Donald Farm in history books. When you use Google Maps it is labeled Donald Farm. Closeup of a map at the NC State Archives called "Hyde County, North Carolina (State Highway and PublicWorks Commission)" Published in 1938.
Lake Comfort is shown labeled in the center and is apparently where my Whitney Clan lived. It spans approximately from Swindell Fork on until it ends at where the map is labeled New Holland (part of the word Holland is cut off in the right portion of the map). 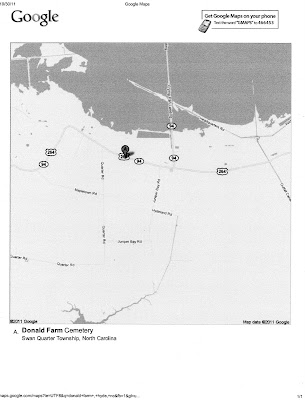 Map Provided by Google Maps
The Letter A marks the location of Donnell Farm.

Now you may have noticed on the last map that there is a cemetery  next to Donald Farm or as I would like to call it Donnell Farm. Are you thinking what I'm thinking? Have to see if there is listing somewhere of who's buried there. I'll keep you posted.