On my last post regarding Augustus Whitney's Civil War pension file, I had found out that Dr. M. M. Murray employed my 2nd great grand uncle as an "office boy" prior to the Civil War.  As soon as I found this out, I starting digging to see who this M. M. Murray was. This is what I found out.


HYDE COUNTY - The venerable Riley MURRAY, the oldest citizen of Hyde County, died at his residence on South Lake last week at age 95. He had been blind for some years. He was an old landmark of the county, full of old reminiscences of distinguished men with whom he had been acquainted. His mental faculties were well preserved to the last. We hope some of our Hyde County friends will pay a deserved tribute to his memory and useful life. (The Economist-Falcon - Friday, March 2, 1894; pg. 3)

Now, according to Augustus's pension file he died in Lake Comfort, NC and resided within 2 1/2 to 3 miles of Dr. Murray during the years after the war. Branson's North Carolina Business Directory for 1884 lists Dr. Murray as a farmer and doctor in Lake Comfort. So from this information, I can gather that the Whitney clan that lived in Hyde County resided on land somewhere between Lake Comfort and Lake Landing. 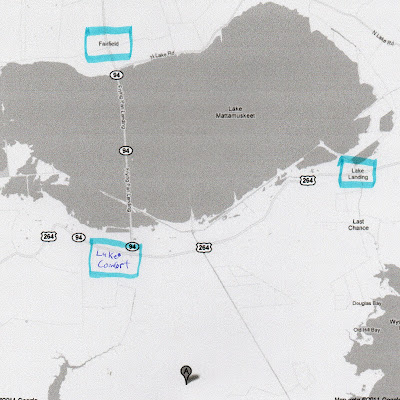