Another Goody I Found While At The FamilySearch Center: The Marriage License For Genevieve Goodrich and Leroy Betz 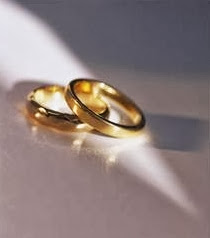 So a couple of weeks ago I finally took a trip to my local Family History Center to look at images of records that I couldn't view at home on my laptop. I wrote about this on my post A Trip To The Local FamilySearch Center Yields More Information About Morrison Goodrich. Silly me for taking so long to finally do this. Anyway, while there I printed up a couple of copies of things, one of them being this, the marriage license for Genevieve Goodrich and Leroy Betz. My tie into the Goodrich family is through my 1st cousin 3x removed Dr. Oscar Dunn Jones. Dr. Jones was married to a Ula Goodrich who was Genevieve's younger sister.

First, here's a little background on Genevieve Goodrich. She was the third oldest out of the five children born to Henry Goodrich and Alice Stevenson Homan. I found what I believe to be her date of birth in the District of Columbia, Births and Christenings, 1830-1955, index on FamilySearchorg.  It is listed as December 21, 1879. 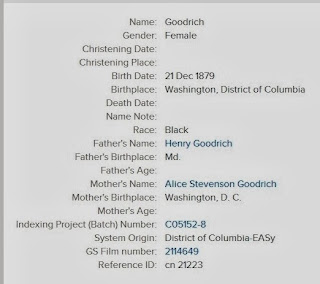 The date of birth here seems to be corroborated by the 1880 census for the family. The household was enumerated on June 3, 1880 and it shows Genevieve's age being 5 months.

Here she is again shown living with her mother and siblings in 1900.

Genevieve Goodrich and Leroy Betz were married on February 10, 1904 in the District of Columbia. It is noted that the marriage was "soleminized" by a Rev. Frank X. Brischoff  and took place at the home the Goodrich family had been renting at 1235 T St NW. 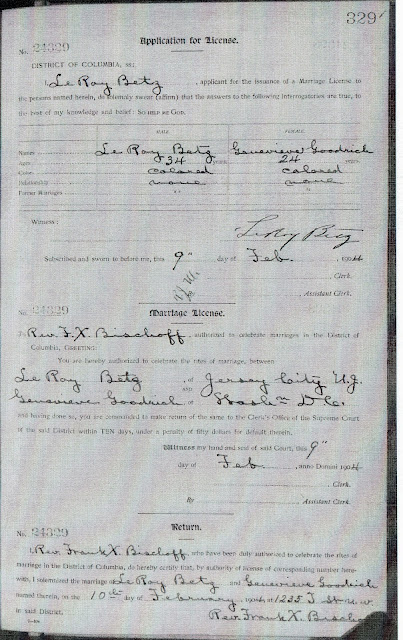 It appears that Genevieve and Leroy Betz inherited the home of Alice Goodrich (Genevieve's mother) after Alice's death in 1918.
Leroy and Genevieve were still living in the home at 914 T St NW up through 1940 along with their children.

Here's the Betz household in 1930. Note that Morrison Goodrich, Genevieve's brother is shown living in the home as well as a couple of other lodgers. One of those lodgers, Harriet Stevenson, was listed on the 1920 census as being Genevieve's aunt. I would bet that Albert Goodrich is an uncle or some other relative. I still have some more digging to do here.

So to my cousin Jane, be on the look out for any cousins by the last name of Betz or Goodrich from D.C. :)