The Book Of Me: Prompt 5 --Your Childhood Home --Part one

October 08, 2013
For details about The Book Of Me, Written By You project created by Julie Goucher, of the Anglers Rest blog, please refer to this link  http://www.anglers-rest.net/book-of-me-written-by-you.html.

The prompt for week 5 is Your Childhood Home

When did you leave home?
Where was it?
Where did you move to?
Was it rented or owned? –  with parents/Grandparents
Was it inherited
What was it like – describe it – each room.
Were there a favourite room?
Is there anything you particularly remember from the house?
Pictures
The road & area

I had three different childhood homes out of which only two I remember. I was only a year old when my family moved from my first childhood home. Our family rented an apartment at 133-24 Dennis St, Jamaica, NY. Here's a picture of my mom pregnant with me standing next to my older brother in front of the house. 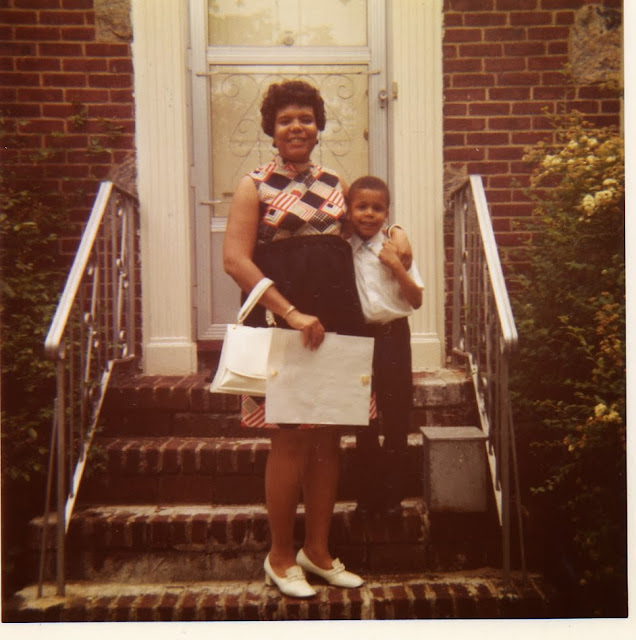 Here's a present day view of the place.

The owners, the Scruggs, lived on the first floor of this home. They were a lovely brother/sister pair who became like family to us. Even after we moved away we kept in contact, stopping by to visit for holidays and birthdays. Ms. Scruggs was a real dear. She always had toys in the home for my brother and I to play with when we came by. I think she babysat other children, so that's why there were so many toys there. Anyway, she just had the sweetest disposition about her, always patient and doting. Mr. Scruggs we didn't interact with much because he had emphysema that became progressively worse through the years.  My brother probably has more memories of them so I am going to make a mental note to have a chat with him real soon about what he recalls about our Dennis St years.

After living at the Dennis St apartment, my parents purchased their first home at 115-42 223rd St Cambria Heights, NY. This is the home where I have some of my fondest childhood memories. Grandparents, aunts, and uncles all seemed to live within a 15 minute drive from our house, so we saw family constantly.

It's a little shocking seeing the house now without the huge maple tree that used to sit out front. The roots had become so large that the side walk had started to buckle up around the tree.  It looks like the sidewalks were redone at some point and I suspect that is when that maple tree met it's demise. Over the years, I think my parents renovated almost every surface in that house. They updated the electrical, finished the basement, and put in a half bath down there as well. The first floor had a little hall closet and a small entryway before you entered the living room. I have especially fond memories of the magic of seeing mail slip in through the mail slot in the front door. We had that 1970's orange marble carpet all along the first floor and up the stair case to the second floor. 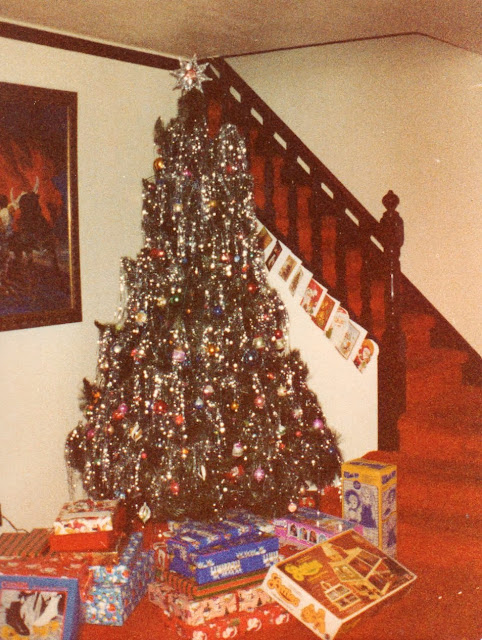 Christmas 1981
View of in the living room at house in Cambria Heights. 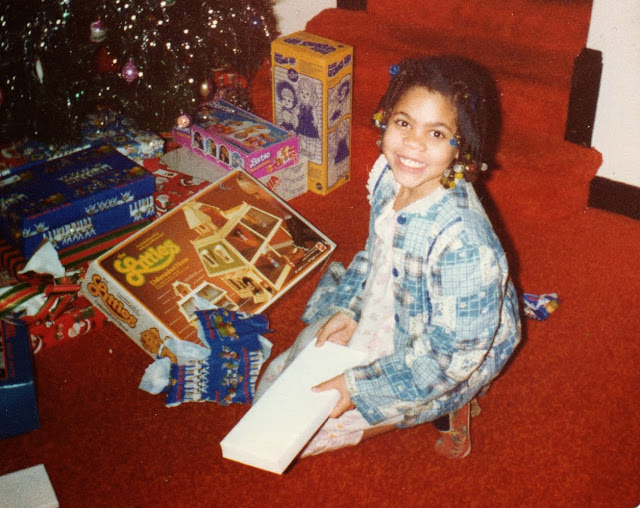 OMG I am looking at this picture and I think this was the year I got a Barbie perfume maker and the Little's Doll house for Christmas! This was a good year indeed. Oh my poor family, I went around the next year smelling like Glade air freshener.  Love you family. The things you have put up with through the years. Thanks for understanding LOL!

On the first floor the layout was pretty simple. The living room led into the dining room, which led into the kitchen. In the kitchen there was a side door that led outside.  Initially, outside that door there a wood staircase that was painted an awful brown color. It became quite rickety so my parents redid those stairs too and had a brick stoop put in instead. Then there was the door that led to the basement, which was my dad's man cave.

The kitchen my parents fixed up too. There was a yellow floral wall paper that I believe my mother hung up. If I remember correctly there was a section of striped wall paper too. I think my brother wanted stripes and I liked the floral so my mom used both. Don't quote me on this though. My memory feels a little foggy on this topic. The one thing I do remember very well about this kitchen is this was the place my mother would wash my hair. She would clear off the counter next to the sink and I would lay down on top there as she would wash my hair. I would lay there with my eyes closed, enjoying the sensation of getting my head scrubbed. That was Sunday's activity. Getting my hair done.

The second floor included a bathroom and three bedrooms out of which two were a decent size. Being the youngest of the family meant I of course had the smallest room. At least it was my own space and for that I am grateful. My room I would say was my favorite space in this house.

The backyard was small but it was a backyard. Originally there was an apple tree that sat in the middle of the yard, making most of the space unusable. My parents had that taken down and put a cement patio out by the garage.  I wasn't a fan of our backyard. To me it always felt kind of buggy and just not a welcoming place to hang out.  Ha! I just had a flashback to something funny. I remember one year, we were having a cookout in the back yard and we had family over. My father was in charge of the grill and had warned me several times not ride my tricycle too close to the grill. So what did I up and do. I rode too close to the grill and got a small burn on my elbow. I cried of course. That's when my aunt Eloise said the funniest thing. She was one of my maternal grandmother's sisters who was known for her extreme honesty we'll say. She turned to me and said "Stop crying! You still have another one." I stopped crying immediately and looked at her in shock. Now I would dare not ever say this to her but in my mind at that moment, I said "Damn! A kid gets no sympathy in this family. Alrighty then, let's carry on."

We lived at this home until September of 1982. Then we moved to Lake Ronkonkoma, Long Island.  I am going to talk about that house in my next post.

my childhood The Book Of Me