April 22, 2014
I am participating in the 52 Ancestors in 52 Weeks Challenge put forth by Amy Johnson Crow of the blog No Story Too Small. If you aren't familiar with the challenge be sure to check out her blog. 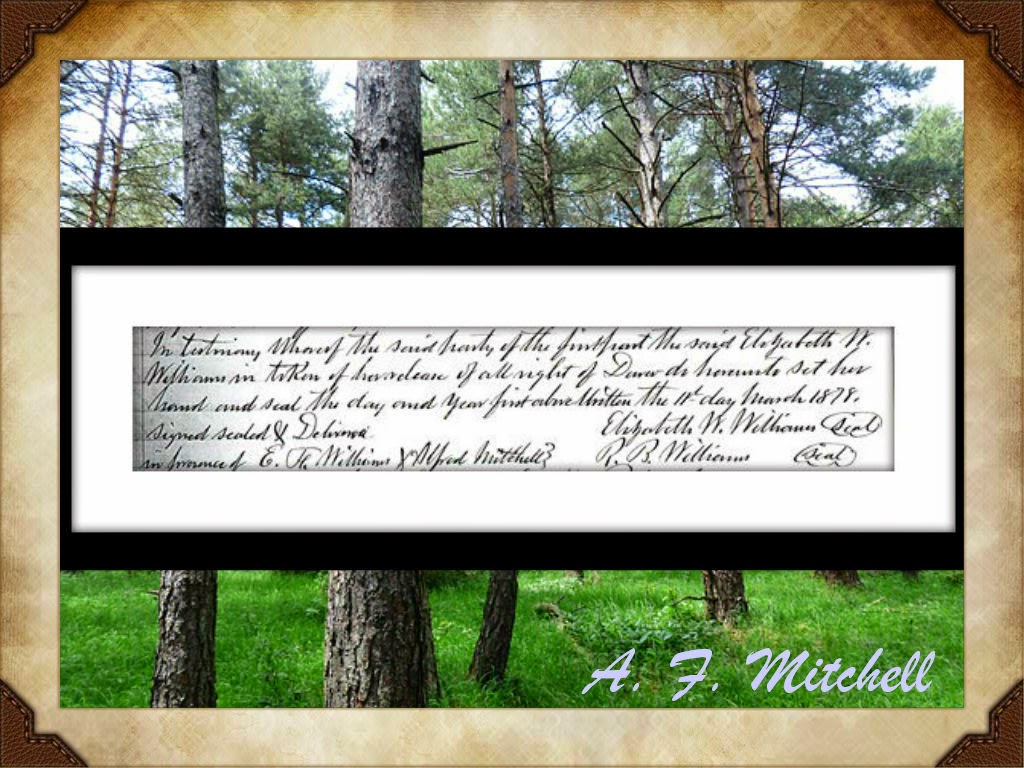 Imagine it's March 11, 1878. You are 22 years old. You were born a slave but now you and your family are free. You were once considered property but now you are bearing witness to your father signing a deed to purchase land. What would that feel like?

Well, that scenario describes what it was like to walk in the shoes of my 2nd great grand uncle Alfred Mitchell. Alfred Mitchell was one of the children Mortimer Mitchell and Annie Taylor Mitchell. Based on information from his marriage record and his death certificate, I believe he was born on July 31, 1856. His death certificate showed his place of birth as being Beaufort County, NC.

What a moment for a father and son together! A father showing his son how it is done; How to purchase land. A son sharing in the moment by bearing witness and signing his name on the deed. What a great example Mortimer was for his son.  If you would like to see more of Mortimer Mitchell's deed, take a look at my post, The audacity to own land.

Alfred and his family settled in Riverdale, NC after the Civil War. He married Chloe Ann Allen, a Riverdale native, on January 29, 1880.

I know that Alfred and Chloe Mitchell had at least one child together, a Sarah Mitchell born around 1889. The family group can be seen here on the 1900 Federal Census.

I was able to go on and find a marriage record for Sarah Mitchell which again showed Alfred and Chloe Mitchell as her parents. 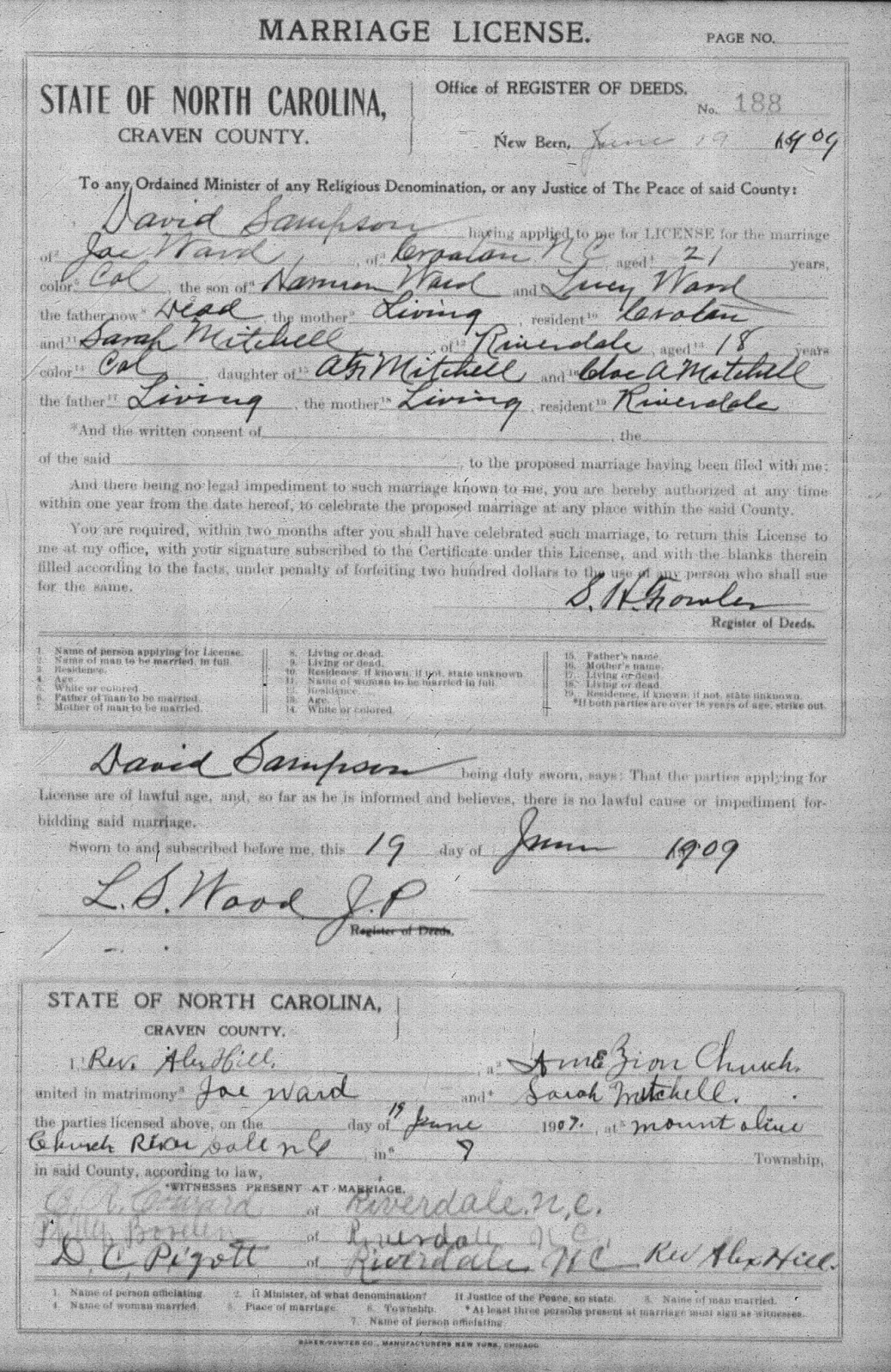 In addition to Sarah, there were two other children who may in fact be the children of Alfred and Chloe Mitchell. On the 1910 Federal Census it lists a Shem H Mitchell living in the Mitchell household. His relation to the head of the family is listed as "grandson."

Source Information:  Ancestry.com. 1920 United States Federal Census [database on-line].
Provo, UT, USA: Ancestry.com Operations Inc, 2010.
There were two sons listed, Shem H., who I believe is the same one who was listed on the 1910 census and Napolian. I haven't found much on either individual as of yet. Napolian/Napoleon's trail runs cold after 1930 for me. I think "Shem" may be an abbreviation for Sherman. I did find a Sherman Mitchell who passed away in May 1979 in Brooklyn who might be a candidate for my Sherman Mitchell but for now this is all I know.

Back to Alfred now. Alfred indeed took after his father and was able to purchase a few properties of his own. His first purchase took place just four short years after his father bought his land. This I find absolutely amazing. Over the course of the next few Mondays I will share Alfred Mitchell's deeds using the "Amanuensis Monday" theme.

According to his death certificate, Alfred Mitchell died on February 24, 1934 from cardio-renal vascular disease (arteriosclerosis).  He's buried at Mt Olive AME Zion Church Cemetery in Riverdale, North Carolina.  There is no marker left to note the location of his grave but he's more than likely buried near his mother Annie Mitchell and his Sampson relatives. 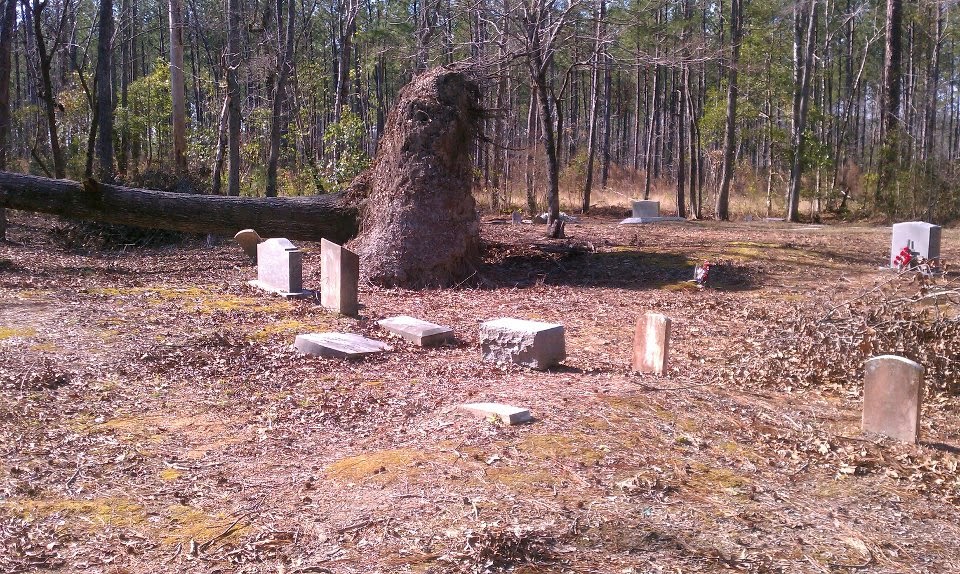