52 Ancestors: #17 Thomas Whitney--How Did You Get To Hyde County? 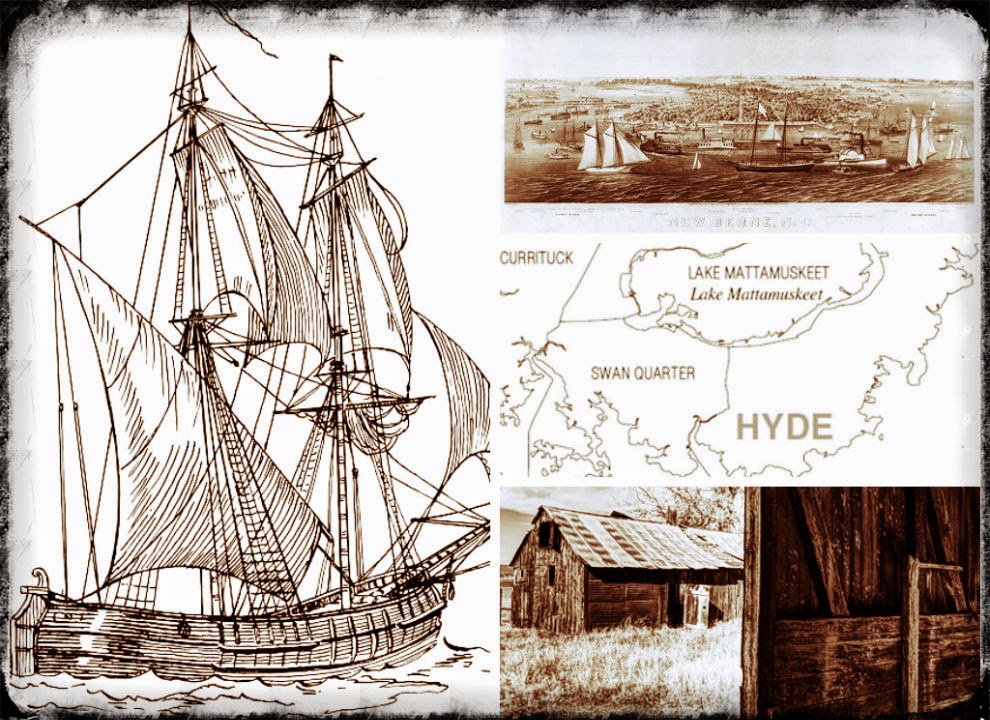 Life got kind of busy in my household last week so I didn't get a chance to write a post for this challenge. Today at last I have a bit of quiet so here goes.

My last 52 Ancestors post was regarding my 2nd great grandfather Samuel Whitney who was born in Hyde County, NC. To continue on with this family line, I'm picking up with Samuel's father, Thomas Whitney.

My 3rd great grandfather, Thomas Whitney, was born sometime between 1805 and 1820 based on information found on the U. S. Federal Census. Now where he was born is up for questioning.

I know that my 3rd great grandfather was married at least once to a Margaret Merritt/Merrick. From that marriage, I think they had at least three children together.

A few years ago, I wrote to the Hyde County Register of Deeds requesting copies of records for a few Whitney ancestors of mine. One of those items was a copy of a marriage certificate for a Cornelius Whitney and a Olivia "Liviann" Merrick. On that marriage record dated January 14, 1886, it showed the parents of Cornelius to be a Thomas Whitney (living) and a Lucy Blount (deceased).  This Cornelius, who was born around 1843, may in fact be another child of my Thomas Whitney but I haven't been able to prove it. Cornelius Whitney's household was listed right after Thomas Whitney and Augustus Whitney's households on the 1870 census which gives me the sense that there was some sort of familial tie. 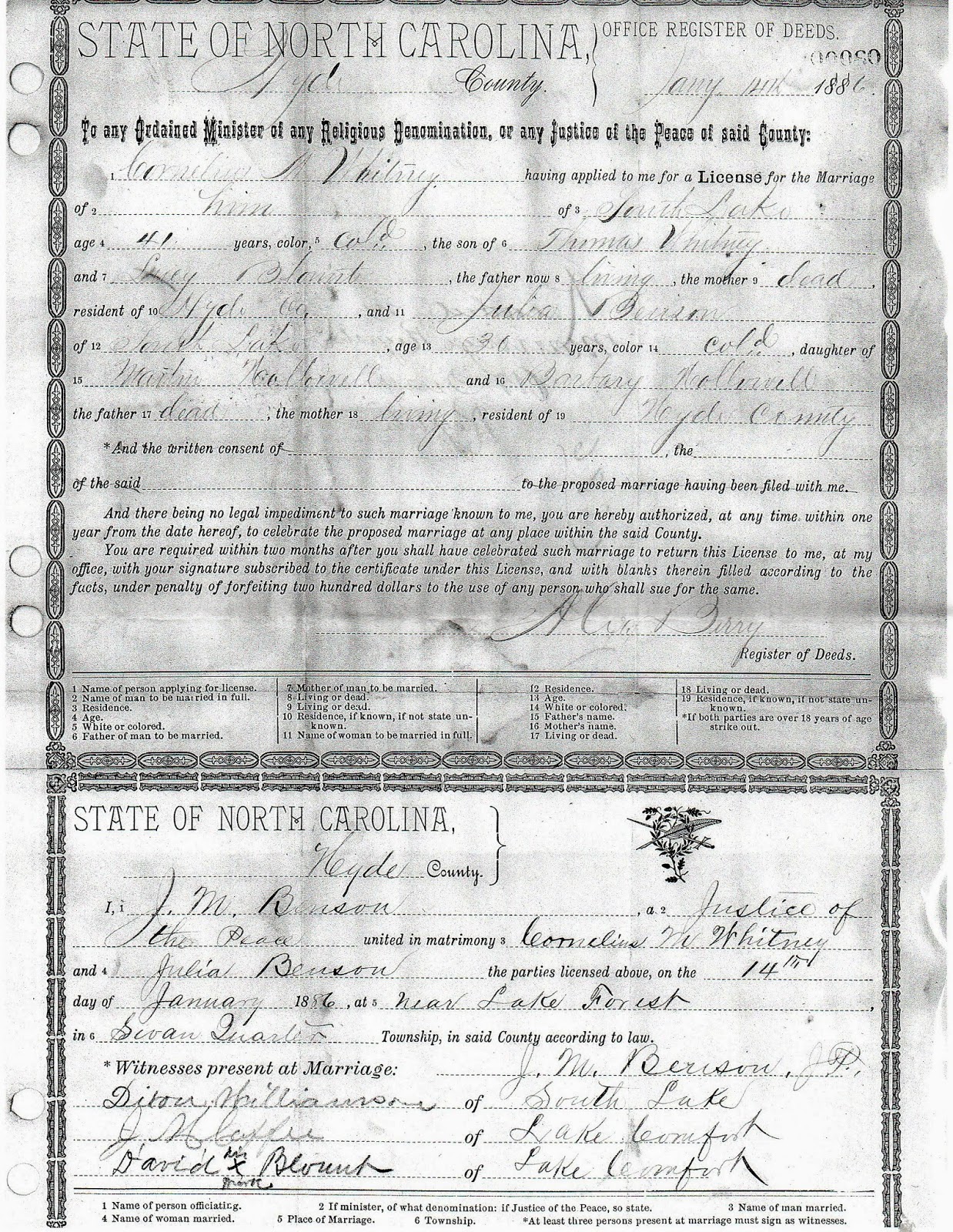 Copy of Marriage License of Cornelius Whitney and Lucy Blount obtained
from the Hyde County, NC Register of Deeds.

Now back to my question I posed earlier. How did Thomas Whitney get to Hyde County? I have a couple of theories regarding this branch of my family tree. Based on my family's oral history this particular line was of some portion Portuguese decent which originated from the Azores. This information seems to be backed up by recent updates to my FamilyTreeDNA results and my mother's as well.  If you missed my post showing our "myOrigins" updates from Family Tree DNA, here's the link: http://howdidigetheremygenealogyjourney.blogspot.com/2014/05/my-origins-update-on-family-tree-dna.html

In summary from that post, My mother shows approximately 17% of her DNA comes from the North Mediterranean Basin while my DNA shows approximately 6% coming from the same area. The Family Tree DNA website describes the North Mediterranean Basin as being "situated in the southwest of Europe from Spain to Greece." This seems to back up my oral history.  Could he himself perhaps been Portuguese or Portuguese/African Mix? Perhaps.

I believe that Thomas Whitney may have been residing in New Bern, NC prior to Hyde County and this is based on the this entry I found in the 1830 census: 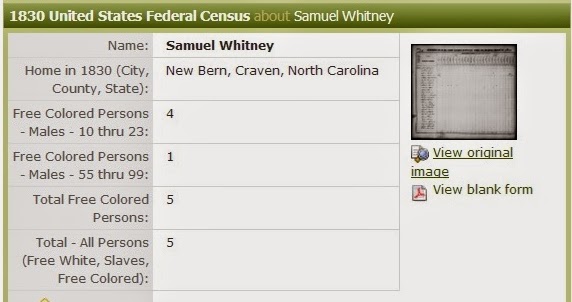 
My working theory is that perhaps this Samuel Whitney was my 4th great grandfather and one of the four free colored males aged 10 thru 23 was my 3rd great grandfather Thomas Whitney. The name Samuel has been used repeatedly in the naming of children in my Whitney family line and that tradition continued on when my great mother, Carrie Whitney Harrison, named one of her children Samuel David Harrison. 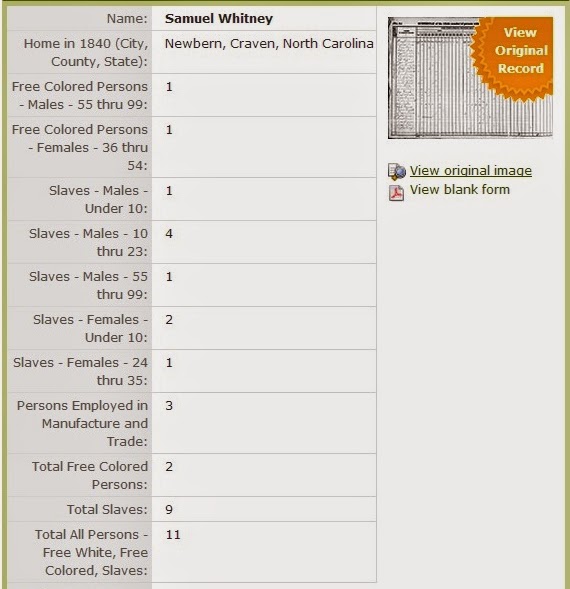 All I do know is that Thomas Whitney found his way to Hyde County, NC by 1870. Where was he all those years?

The last record I was able to find on Thomas Whitney was an entry on an 1890 Tax List found courtesy of the Hyde County, NC tax lists on the Hyde County Gen Web Page.

My 3rd great grandfather's name was noticeably absent from the 1900 Federal Census taken in Hyde County so I believe he died sometime between 1890 and 1900.  There is a black cemetery in near Swan Quarter which is sometimes referred to as "Donnell/Donald Farm Cemetery" or "Greenhill Cemetery." There are a few Whitneys buried there. I suspect that this may be Thomas Whitney's final resting place.