And the Winner is ...An Empty Lot!

July 15, 2011
If you read my post from earlier in the week regarding John T Harrison's home on Brown's Ave in New Bern, you saw the picture of the pale blue house with white trim that I thought was possibly his. Well, I contacted Victor T. Jones of the Kellenberger Room of the New Bern Public library to see if the library possessed  an old map of New Bern that showed properties listed by their lot numbers. I had a copy of the deed and it showed that the property was on Lot 100 of the city grid. Mr. Jones quickly emailed me back and provided a link to the UNC at Chapel Hill map collection. They have a wonderful collection of old maps for North Carolina and luckily they had a map of New Bern from 1913 that had just the information I needed. 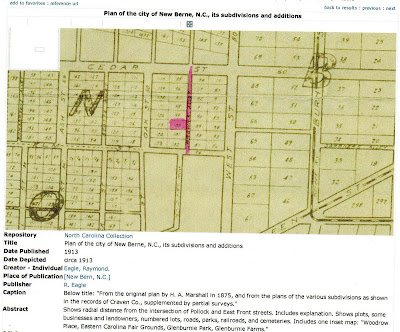 It looks like Lot 100 had two houses eventually built on it. My great grandmother Carrie Whitney Harrison (John's wife) inherited her house for the purchase price of $10.00 back in 1938 from her older brother Samuel David Whitney who lived next door at 711 Brown's Ave. John Harrison Sr and Carrie resided at 709 Brown's Ave. So the winner is .....drum roll please. An empty lot. 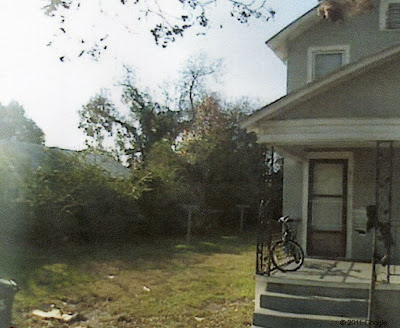 Oh well. At least I know where it was and it looks like her brother's house is still standing.

That's all for now. My kids are begging to be taken to the park. Too pretty a day to be sitting in front of a computer for too long. Have a great day everybody.