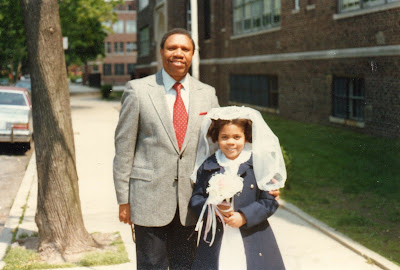 Lemuel Richard Harrison and me.

If I hadn't named my blog, "How Did I Get Here?", I would have named it "In the Mix". My ancestry is a big old melting pot. I have African, Native American, Barbadian, Portuguese and other European Ancestry (possibly Irish--according to family lore but can't fully back that one up yet.) My grandfather Lemuel Harrison was a charismatic man who was born in New Bern, North Carolina on February 20, 1920. He moved to NY when he was a young and was married and had a daughter before he turned 22. How's that for growing up fast. This brings back to me a memory of my mother telling me about how she was born like 2 months early or something like that and how her mom and dad weren't ready....meaning they didn't have anything set up in the house. My mother's first bed was a bureau drawer until they came by a crib at sometime later time. When I heard this for the first time, I said "Say, what?!" I had never heard of babies sleeping in a bureau drawer before. When I told my husband this story, he informed that that was not uncommon. His heritage is predominantly Irish with a little English.  Many of his ancestors had 8-15 kids in a household and it wasn't unusual that someone's first bed was a bureau drawer.

Anyway, back to Lemuel. He was 1 of 13 children born to John Thomas Harrison and Carrie Whitney Harrison.  Here are the members of the family.

That's a lot of folks. LOL. How do you feed all those people?! Well, they made it work. Unfortunately, my great grandmother Carrie died due to complications from a Cesarean section after having her last child on August 1, 1939. Maybe her body was just too wore out  from having so many babies.

I have only met Robert and Carrie out of my grandfather's siblings. I don't have a visual memory of Carrie because I was a very young child when I met her, however we have reconnected in the last two years and it really has been sweet getting to know her.  I met my uncle Bobby back in 2002 and my jaw hit the floor when he walked into the room. He looked then like an older version of my own older brother. No denying the connection in genes there.  I keep in touch with him too. I love hearing him laugh, it so reminds me of my grandfather's laugh. So sweet. Anyway, I never really spoke with my grandfather about this particular topic but I think for him in his house when he was growing up...it was like you better hurry up and grow up and move out on your own. It just couldn't have been easy, a man on his own raising 13 kids.

This is turning into a rambling post but it is what it is. Anyway, my grandfather loved his family dearly. He loved having a birthday party every year at his house in Jamaica, Queens. The whole family would pack into his house, sing "Happy Birthday", laugh, and catch up on the year's events. Lots of great memories. I have to thank him for kind of being the glue to keep everyone connected. After he passed away in 1987, my family seemed to drift apart as many families do. Kids grow up and start there own lives. Everyone seems to go their own way.

Last year, my mom shared with me some of her photos of when her parents were together. There is no denying the love this man had for his daughter in these pictures. 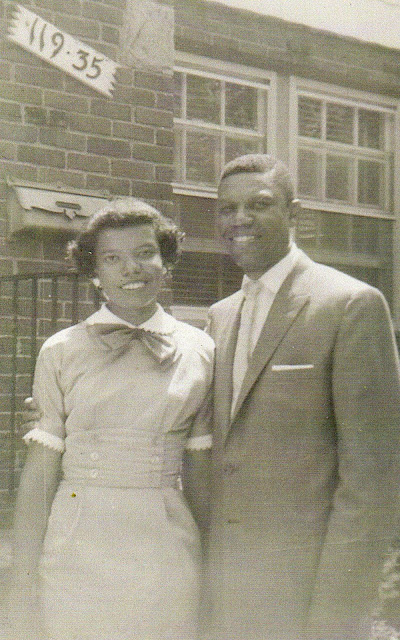 My mother and Lemuel Harrison 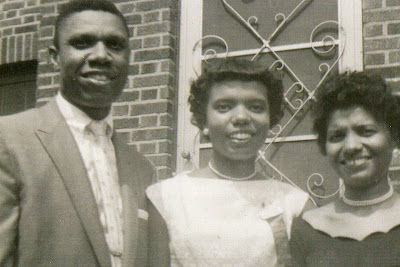 Lemuel Harrison, my mother, and my grandmother Mary