May 23, 2012
So an interesting dynamic happens when you blog. Sometimes something gets started with just a feeling. As of late, I have had this urge to review information that I had found on my Mitchell family line. This branch of the family was from a town about 9 miles south of New Bern, NC, called Riverdale. By doing this I was able to locate some new information on family members which I will feature at some point on this blog.

Well, the other day I received a phone call. I had a lovely conversation within someone who has ancestors from Riverdale, NC as well. This individual found my blog online and that's how we became connected. Well the combination of my urge to research the Mitchells again and this phone call led me to review pictures I had taken from my January trip to New Bern and Morehead City. In my blog post, Tombstone Tuesday: Willie Kennedy --The Future Is Now!, I featured a picture that I had taken of the grave of a Solomon Allen.. In the background of this picture there was another grave that was visible and with the magic of today's smart phone's I was able to crop the picture down to get a pretty good view of Willie Kennedy's grave. Well when I went back over those pictures, I saw another shot that I could kind of do the same thing with. So here it is. 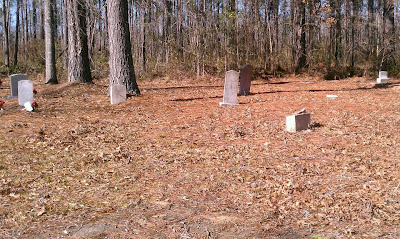 Image from what is referred to as Riverdale Community Cemetery or Mt Olive Cemetery
The grave that is in far left of this image is the one I was able to crop in closer to see the name. 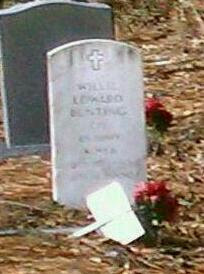 I found on Ancestry.com that there was a Willie Edward Bunting Jr. who died in April 18, 2000.  Perhaps the grave behind Sr. is his son's grave.