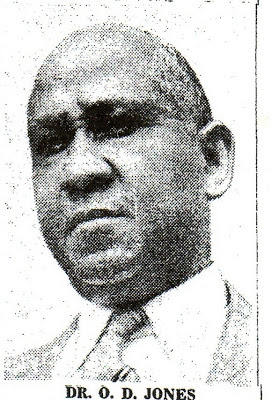 Dr. Oscar Dunn Jones
February 29, 1888--July 29, 1943
As you may already know, I am currently On The Hunt For Elizabeth Jones. In the midst of this hunt I remembered a mention of an Elizabeth Jones in my 1st cousin 3x removed obituary. Dr. Oscar Dunn Jones was the grandson of Cesar Jones and Mary Mitchel Jones.  His parents were William Henry Jones and Emma Shepard Jones. William Henry Jones was Elizabeth's brother.  After growing up in Morehead City, Oscar went off in the world and earned his degree from St Augustine's College. He studied dentistry at Howard University and was a well respected dentist in Baltimore, Maryland.

Here's his obituary. Pay special attention to the last sentence. 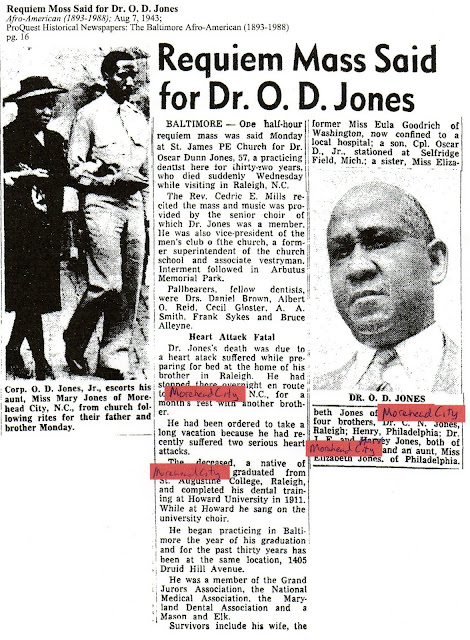 "...and an aunt, Miss Elizabeth Jones of Philadelphia"

This must be the Elizabeth Jones I've been looking for. There it was right there in an obituary I already had. Guess what? I found another mention of her in an article I featured on this blog last year.

I had made an assumption when I began researching my family tree that Elizabeth Jones had died shortly after 1880. Why you may ask? Well, I couldn't find her in any of the later census records for Morehead City. She wasn't to be found in the marriage records as well. Silly me just thought she had died. Why didn't I think she could have simply moved away? When I reviewed Mary Mitchel Jones's will recently and saw Elizabeth was indeed alive and well as of 1900, then it dawned on me what I had done. I had made a bad assumption. Dr. Oscar Dunn Jones died in 1943. Elizabeth Jones was alive and living in Philadelphia at the time of his death. You'll have to tune in tomorrow to see what I found on Miss Elizabeth Jones.