My Harris Family Line --Part one

March 19, 2012
I have to admit I jump around a bit regarding what part of the family I feel like discussing. Well, the whim today has taken me to my Harris family line. The Harrises are part of my maternal line. I think I will start with my 2nd great grandmother, Sarah Jane Harris Whitney. Here's how you get to Sarah from me.

Sarah Jane Harris was born sometime around 1860 in Jones County, NC. Her death certificate shows her birth date as being October 11, 1866, however this conflicts with information provided on censuses and her marriage record. She died Sept 12, 1937 in New Bern, NC at the family home located at 10 Brown's Alley. Sarah's husband, Samuel Whitney, passed away in 1916, so you find their daughter Mrs.Carrie Harrison as the informant on the certificate. 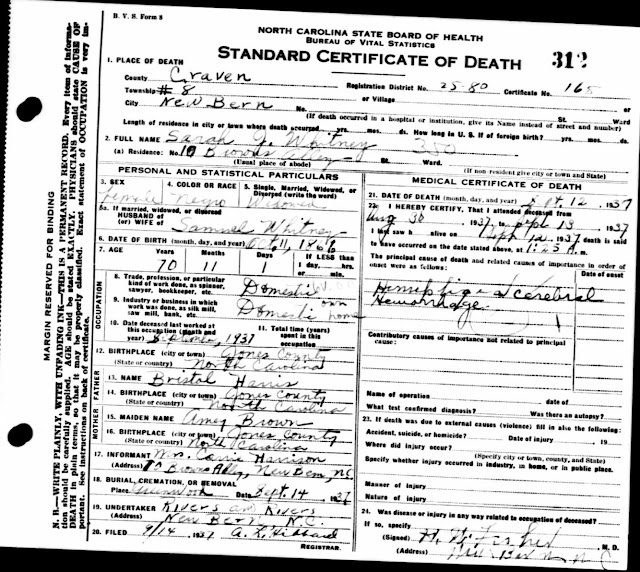 Sarah's parents were a Bristow Harris and an Amy Brown both of Jones County. Now Bristow is referred to sometimes as Brister, Bristol, or Bristo on different records but I have to chosen to stick with referring to him as Bristow.

I find it interesting that the family is living on the "Alley with no name," which I suspect is a reference to Brown's Alley before it was given it's name. The household shows Amy, Bristow, Sarah and a son Lemuel. There's also, an Allen Hatch who upon further research on him I found he was listed as lumberman in New Bern in 1870. This is interesting because my 3rd great grandfather, Bristow was listed as "Boatman" in the 1870 census. Perhaps, Bristow Harris and Allen Hatch had some kind of business partnership going on. Who knows?

The interesting thing about Bristow is that he had a previous family that I discovered from various bits of evidence. When I did a search on the website, FamilySearch.org., I found quite a few clues when I entered simply Bristow Harris and New Bern in the search fields, the first of those was an entry in the Freedman's Bank Records. Words placed in parenthesis are my interpretations of what is written. 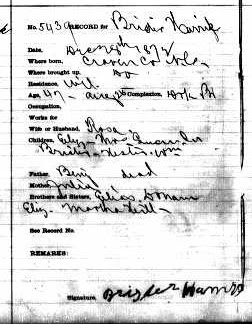 No. 5439 Record for Brister Harris
Date:  Dec 28th, 1872
Where born, Craven Co. NC
Where brought up, DO (not sure what DO means, perhaps abbreviation for ditto?)
Residence Wil. (Wilmington)
Age, 47- (after his age there's an abbreviation that looks like Aug 25--perhaps his birthdate?)
Complexion, Drk Bw
Occupation,
Works for,
Wife or Husband, Rosa
Children, Eliza, Thomas, Lucinda, Brister, Hester, Wm (William)

Where were these children? What happened to Rosa, Bristow's wife? Then there is the whole thing about now could those really be my 4th great grandparents, Benjamin and Julia?