So I was able to locate one of Bristow Harris's children that were listed on the Freedman's Bank Record for him. Lucinda Harris we saw on my last post tragically died from complications that evolved from a Cesarean section operation. Her residence listed on the death record was Cambridge, Massachussetts. So what happened to the rest of Bristow's children?

After some more digging I found Hester A. Harris Pierce's Death Certificate. Guess where she was residing at the time of her death? Hmmm Cambridge, Massachussetts! 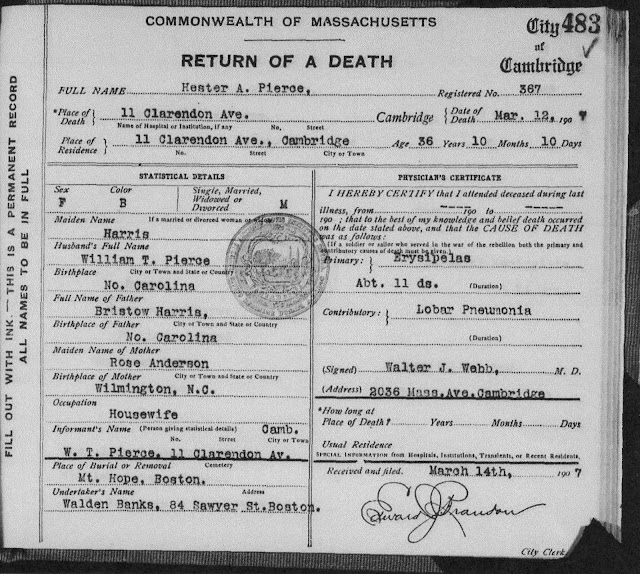 Another beautiful thing was found on this document. The name of her mother and Bristow Harris's first wife. She was referred to as Rosa on the Freedman's Bank Record. Shown here we see it is Rose Anderson and that she was born in Wilmington, NC.

I found William Harris, another of the children born from the union of Bristow and Rose, living in Cambridge, Massachussets as well.

I still have some research to do on the other children listed on Bristow's Freedman's Bank entry to see if I can find where they wound up. So when I know more on Thomas, Eliza/Elizabeth, and Brister/Bristow, I will provide an update. 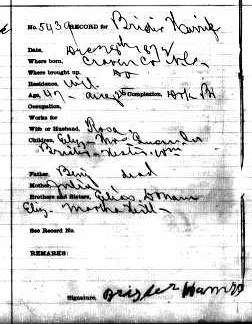 Bristow's father, Benjamin, I have a feeling more than likely passed away before the Civil War. That may have been the case as well with Bristow's first wife Rose/Rosa. Julia Harris, his mother, luckily was still alive after the war and I found her living with her son Donam.

Here they are in the 1870 census for Township 9, Craven County:

From the combined evidence, it would seem then that Benjamin and Julia Harris are my fourth great grandparents. Wow! Ask me if five years ago I would have thought I would be able to find that out? :)