March 06, 2012
In January, I made a trip to Morehead City and New Bern, NC to attend the funeral of my grand aunt Rosa Sanders. While down in North Carolina I made it a point to visit a special little cemetery located behind the Mount Olive AME Zion Church in Riverdale, Craven, NC. Well, it was a wonderful visit. I took pictures of my 3rd great grandmother's headstone and several other pictures of my ancestors graves. One of those pictures I took was of the grave of the father-in-law to my my 2nd great grand uncle, Alfred Mitchell. Alfred Mitchell married the daughter of a man named Solomon Allen, a Miss Chloe Allen. Anyway, while I was visiting the cemetery I became so impressed by the size of Mr. Soloman Allen's grave stone and the masonic symbol presented so beautifully on it. As a result, I took several pictures from different angles. Here is one of them. 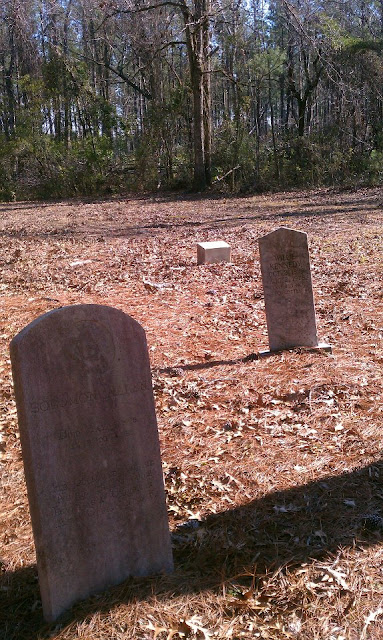 
Now when I was taking  this picture, my focus was on Solomon Allen's grave. I just didn't notice until later on the other grave that was quite noticeable in the shot. So I decided to crop the shot down on my smart phone.

Now I don't know how many of you out there are familiar with early 1980's SciFi but the movie " Blade Runner" came out during that time and is one of my favorite films. I love cinema, so the movie just resonates with me on many levels...and I am talking about the director's cut (the version without Harrison Ford's annoying voice over.) Anyway, there is this section during the movie, where Harrison Ford's character takes a photograph and uploads it into a machine that allows you to pan through different areas in the shot that reminded me of what to a certain extent we are able to do on today's smart phones. Now take note of the above shot. Now look at what I was able to crop down to on my smart phone and then later upload on to my computer.


Now for those of you who are not familiar with the scene I am talking about from "Blade Runner," here's a clip I found on YouTube that shows the scene.

Segment from the movie "Blade Runner."


So who is Willie Kennedy and his relation to Solomon Allen? Okay, so this is what I have found. It looks like that Mr. Willie Kennedy was born a William Kennedy to Solomon's daughter Mariah Allen and her husband Charles Kennedy. That makes him Solomon's grandson. Now we know why he's buried so close.

On a separate note, I can't help but add one of my favorite clips from any movie and it turns out, it is from the same movie mentioned above, "Blade Runner."