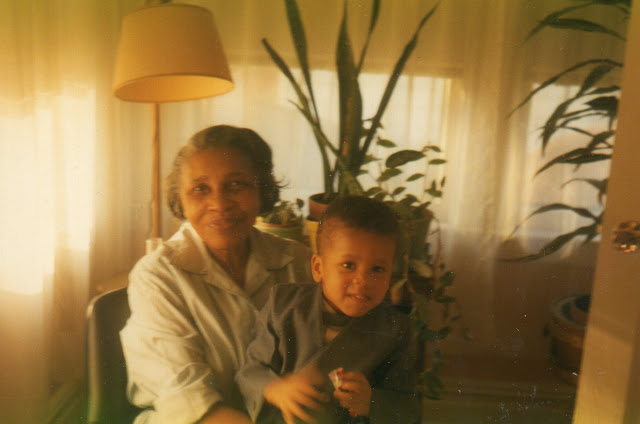 My grandmother, Ethel Murrell, and my brother,
probably, around 1970.

When this past January came around I thought, this year was going to be the year I was going to break down the brick wall surrounding the mystery of my great grandmother, Miss Ella. I am going to refer to her as Miss Ella because that is the one piece of information I feel the most confident about, her first name being Ella. You see, Ella was the mother of my grandmother, Ethel Smith Murrell. These are the pieces of information I know. I know from grandmother's birth certificate, that her mother was listed as Ella Carr and her father was a John Edward Smith and that she was born on January 6, 1911 in Wilmington, NC. John Edward Smith's occupation was listed as being a carpenter. Ella Carr according to my father had a set of children prior to her having my grandmother. The names of two of those children may have been George and Larcy.  The whereabouts of those children we have no idea about. My grandmother had 2 other sisters she grew up with Edna and Hilda. Edna Smith was born March 7, 1918 in we believe North Carolina and she and my grandmother shared similarities in appearance so I think they had the same father. Hilda (Bernice)  Dixon, the youngest, was born in Philadelphia, where the family lived for a period of time before moving to New York City. Her date of birth was February 23, 1921.

I could only locate the family on the 1930 Census.

Ella Carr appears to be 41 years old according to the census which would make her born in approximately 1889. It also shows that she is married. Now according to oral history she married a Jamaican man when she was in Philadelphia and that was the father to the last child Hilda. My grandmother, being older helped to raise her sisters and was forced to drop out of school which she always felt bad about. I have a sense that she was the closest to her mother. Also, I think this is from whom my grandmother learned how to cook so well. Let me just say, "The Woman Could Cook!" The recipes that she knew and the ease in which she worked in the kitchen tells me that my grandma probably grew up under her mother's apron strings.

Anyway, here comes the dilemma. My great-grandmother Ella became affiliated with the Church of Father Divine when she lived apparently in Harlem. Shortly after my grandmother was married and her two sisters were a little older she ran off with the church, as the story goes.  My dad and his sister, Janice never met their grandmother and unfortunately, neither of them were ever shown a picture.  It seems that Ella, never wanted her picture taken. My dad and I have talked about this. We wonder, "Why? What were you hiding? What were you running from?"
If you aren't familiar with the story of Father Divine, here's a summary provided by Wikipedia.

Father Divine (c. 1876--September 10, 1965), also known as Reverend M. J. Divine, was an African American spiritual leader from about 1907 until his death. His full self-given name was Reverend Major Jealous Divine, and he was also known as the "the Messenger" early in his life. He founded the International Peace Mission movement, formulated its doctrine, and oversaw its growth from a small and predominantly black congregation into a multiracial and international church.

Father Divine claimed to be God. Some contemporary critics also claimed he was a charlatan, and some suppose him to be one of the first modern cult leaders. However, Father Divine made numerous contributions toward his followers' economic independence and racial equality.

Father Divine moved to Harlem, NY, where he accumulated significant following in the black community. Members, rather than Father Divine himself, held most deeds for the movement, but they contributed toward Father Divines's comfortable lifestyle. Purchasing several hotels, which they called "Heavens", members could live and seek jobs inexpensively. 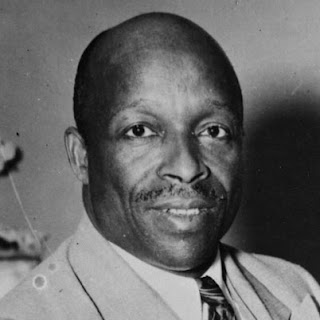 What else do we know about Ella? On the 1930 census we see she is residing in a household with possibly a cousin named L. B. Hayes. Now the reason why this is interesting is that when I sent away for my grandmother's application for her social security card, it read that her mother's maiden name was Ellen Hayes. 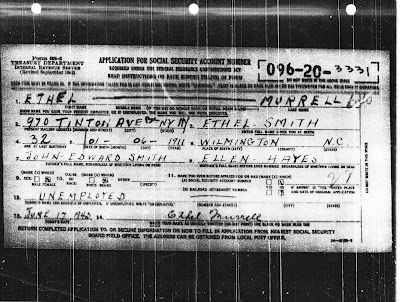 So was her name Ellen and her nickname was Ella? Was her maiden name Carr or was it Hayes? Will her last name still be Dixon  on the 1940 census? Oh 1940 census, hurry up and get here will ya!
Murrell family