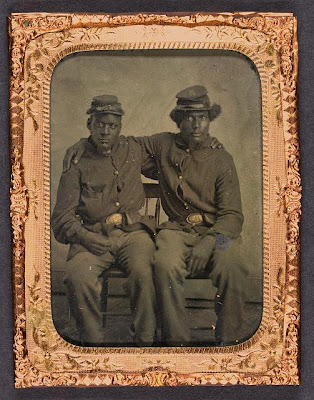 "Two brothers in arms"
Image courtesy of the Library of Congress


If you missed part one of this series, here's the link: Civil War Pension File of Irvin Ellison --Part one
After reviewing the first couple of pages of Irvin Ellison's pension file I started to wonder about the lives of the men who signed as witnesses on this document. Who were they? What were they like?

I started with Riley Bryant, who as of July of 1890, had known Irvin Ellison for at least 26 years. Could they have served to together in the Civil War? The answer to that question turns out to be yes!  Here's what I was able to uncover. 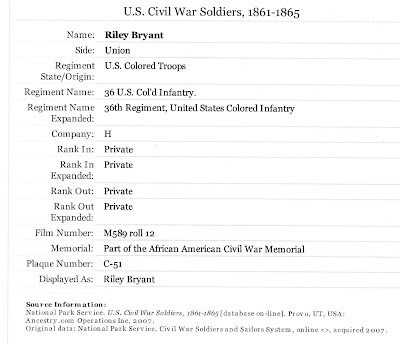 They served in the same regiment and company:  the 36th United States Colored Infantry, Company H.


I found it rather interesting after finding Riley Bryant listed in the U.S. Civil War Soldiers, that I could not locate him listed in the Washington, Beaufort County census. Hmm. What to do..what to do? So I then decided to see if he had received a pension, like my 3rd great grand uncle. It turns out, he did. 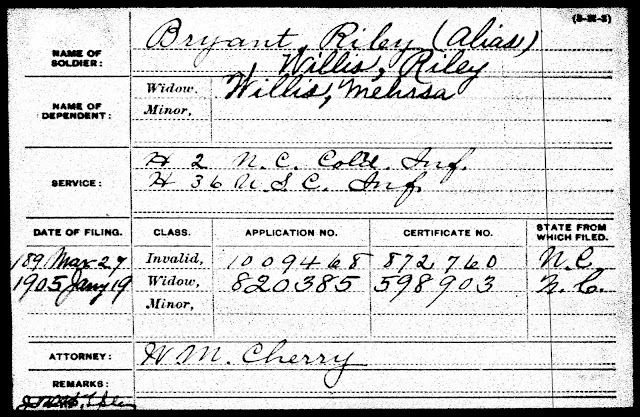 
Aha! The surname Bryant was an alias. Sure enough when I used the last name of Willis in my search on Ancestry.com, I was able to find him living in Washington, NC on the 1900 census.

Riley Willis with his wife Malissa and his mother Harriet
His occupation is listed as pensioner.

Now you are probably wondering why I am so excited about this Riley Bryant guy. Well, one of my brick walls in my family tree is linked to Irvin Ellison's brother-in-law, Henry Bryant. I know that Henry Bryant originated from Washington, NC along with his wife Caroline Ellison, but I haven't been able to get beyond him. Could this Riley guy be connected in some way? What's with that alias too? I needed more information so I decided to look up his name in the Freedman Bank records. I had no luck using the surname Willis, so I tried Riley Bryant in the search fields and I had a hit. 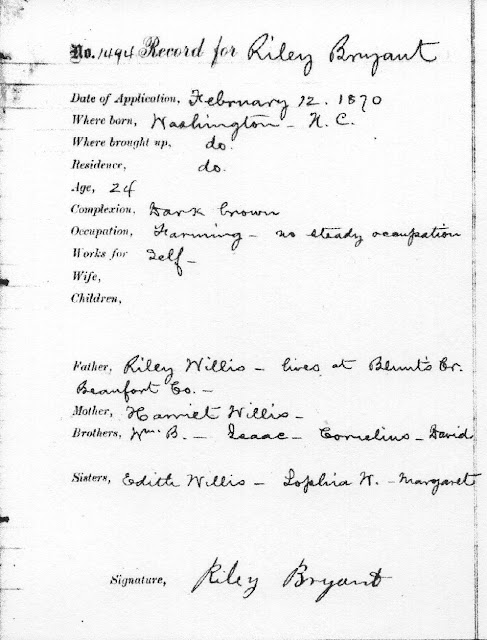 Oh wouldn't it have been nice to have seen a Henry listed among his brothers. Oh well, that would have been too easy right. LOL! Perhaps, he changed his last name to Bryant to avoid confusion with his father? Who knows? This remains a mystery for now.

What I do know is that Riley and Irvin served together in Co. H of the 36th USCT. I believe that a bond is created among individuals during times of war, that only those who have gone through the same experience can truly understand. I will never fully know the extent of the relationship that these two men had. I do know that they had each other's backs. I would not be surprised to see Irvin Ellison listed as a witness in Riley's Civil War pension file.

The next person I checked into was W. H. Howard. Well it turns out that my ability to read old handwriting is not so good at times. After no luck finding any Howards listed in the Washington, NC census, I looked at other possibilities of what the name could be. I believe now that the signature reads W. H. Hamond and was in reference to a man by the name of Wright Hammond.

Whoah! Have to get dinner on the table folks. Mr. Wright Hammond is going to have to wait for another day. :)