There Are No Coincidences!

January 31, 2013
Yesterday, I was on Pinterest searching for things to pin to my New Bern, NC board I have set up there. If you haven't tried Pinterest yet, you're missing out. I have to admit I just started using it in earnest about a month and a half ago but it is a site I check in daily with now. Well, during my search of all things New Bern I came across the following pin: 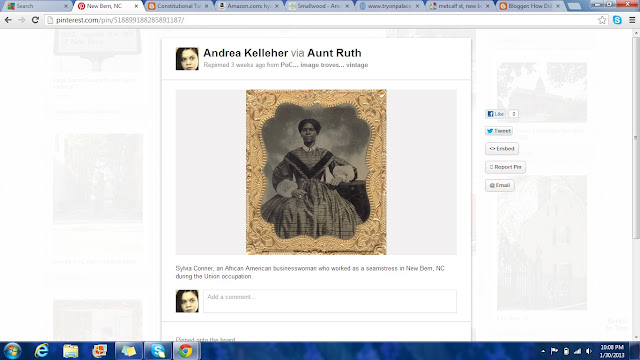 I was instantly mesmerized by this woman's eyes. Then I read the caption under the picture, "Sylvia Conner, an African American businesswoman who worked as a seamstress in New Bern, NC during the Union occupation." That was it. The next thing I know I am on Ancestry.com. I am searching on Google. I had to find out more about this woman. Those piercing eyes had a story and I was going to find out what that story was.

When I tried a search on Google with the name Sylvia Connor and New Bern, NC, I found a couple of very informative articles about this remarkable woman and her sister-in-law Mary Jane Conner. The first article I read through was from a publication of the Tryon Palace called, "The Living History Classroom" Spring 2012. The story that discusses the lives of the Connor women is called "African American Women in Wartime New Bern" and is found on page 10. The beautiful tintypes of Sylvia and Mary Jane are featured on that very same page. The link to this article I've included here:
http://www.tryonpalace.org/pdfs/living_history_classroom_spring_2012.pdf 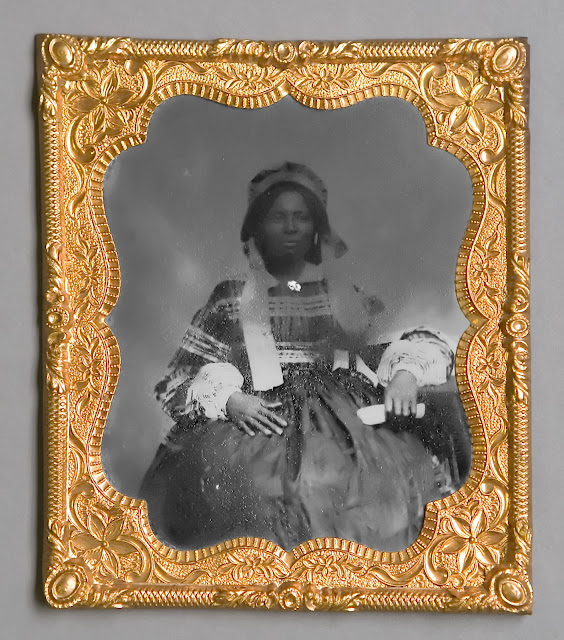 It turns out that these were two very enterprising young women who were able to make a living by sewing and cooking for troops in Union occupied New Bern during the Civil War. The article makes mention of a Pvt Henry A. Clapp of the 44th Massachussetts Volunteer Militia, who regarded the women rather highly and even spoke of them in letters he wrote home to his family.

The second article I read is from "The Palace:  The Magazine of Tryon Palace" Vol. 11 No. 6, Spring 2012.  The link to this is here: http://www.tryonpalace.org/pdfs/PalaceMag_Sprg_2012_Lowres.pdf. On pages 13--15, you will find a section on Pvt. Henry Clapp and it gives even more detail about the lives of Sylvia and Mary Jane Connor. Now this is when it gets interesting. I've included here a portion of this article.


Mary Jane Conner’s husband Shedrick was working in Wilmington, North Carolina, as a cooper in 1873, but a black 62- year-old servant named “Mary Connor” is listed in Isaac Patterson’s New Bern household in 1880. Sylvia Conner returned to the Smallwoods as a servant, albeit for Annie M. Smallwood Hughes, whose husband Isaac Hughes was a prominent town physician. “Sylvia Connor” is listed as living in their household in 1870, with a three-year-old daughter named Eva. There are no other known records of these women.

After reading this the first time, I found myself thinking to myself--Isaac Patterson...Isaac Patterson, I know that name from somewhere.
I went to Ancestry.com and looked up this entry on the 1880 census for Mary Conner.

That's when it hits me how I know the name Isaac Patterson. I pull out my 2nd great grandfather's deed for property he bought in New Bern.  A portion of that deed I have featured below. The rest of it you can find at this link: http://howdidigetheremygenealogyjourney.blogspot.com/2011/08/samuel-whitney-makes-puchase.html

Goosebumps. So those piercing eyes that caught my attention were trying to tell me something. Those same eyes probably saw and quite possibly knew my 2nd great grandfather Samuel Whitney. I am a strong believer in this. There are no coincidences.